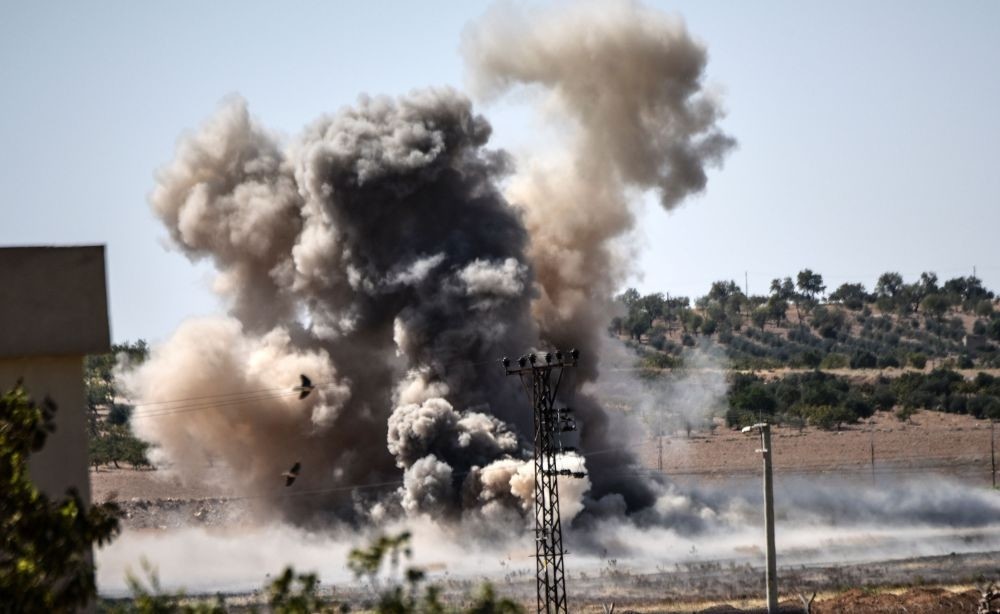 Smoke rising close to the Syrian town of Jarablus in the border with Turkey, Gaziantep province in southeastern Turkey, Sept. 1, 2016.
by İlnur Çevik Sep 02, 2016 12:00 am

It is on record that at least 59 children (10 of them under the age of 15) have been fighting for the YPG/PYD, despite promises that they would be sent home, which has not happened

The United States calls the Democratic Union Party (PYD) and its militia force the People's Protection Units (YPG) in northern Syria its allies. The U.S. has provided the PYD with arms, ammunition and military training and is even furnishing them with tactics to fight DAESH.

Turkey calls the PYD and its sidekick, the YPG, a terrorist group that is an extension of the PKK, which has been carrying out a secessionist campaign in eastern and southeastern Turkey for four decades. The U.S. and the European Union have included the PKK on their terrorist list but have refused to treat the PYD and the YPG on similar terms. This has created friction between Turkey and western countries.

The PYD and YPG have pretended to fight DAESH for several months yet, like the Iraqis, have not managed to make much headway. There are even U.S. recruits in the PYD forces and three have been recently killed during the fighting in northern Syria. The fact that the Turkish forces backing the Free Syrian Army have managed to wipe out the DAESH terrorists in a 400 kilometer region in only a week is a clear indicator of what Turkey is capable of in northern Syria and how the PYD has been dragging its feet for months in its so-called war against DAESH terrorists.

The PYD has misled the U.S. saying it will fight DAESH but in fact has been involved in another mission of carving up northern Syria for the Kurds and eventually setting up their own mini state.

The PYD has also misled the U.S. by taking arms and bombs from them and sending them to the PKK to fight Turkish security forces inside Turkey.

But that is not all. The PYD and the YPG have been involved in gross human rights violations, which U.S. officials have preferred to bury instead of bringing into the daylight and forcing the PYD to behave.

Since the day the PKK arrived in northern Syria from the Qandil Mountains in northern Iraq, they have butchered Kurdish moderate politicians and opinion leaders in Syria and thus have terrorized the people to submit to the PYD.

These have happened before the "watchful" eyes of U.S. officials but they have preferred to turn a blind eye. The Syrian Kurds of the PYD and the YPG have continued to disregard human values. The fact that the PYD and YPG kidnaps children and turns them into fighters and forces them to fight against DAESH is a great tragedy. Human Rights Watch, Amnesty International, United Nations Syria Investigation Commission and Kurdish Watch have all confirmed this tragic situation and the human rights abuses committed by the PYD and the YPG.

It is on record that at least 59 children (10 of them under the age of 15) have been fighting for the YPG, despite promises that they would be sent home, which has not happened.

The fact that the Americans have done nothing to correct this situation and warn the PYD and the YPG against human rights abuses simply makes them an accomplice.
RELATED TOPICS