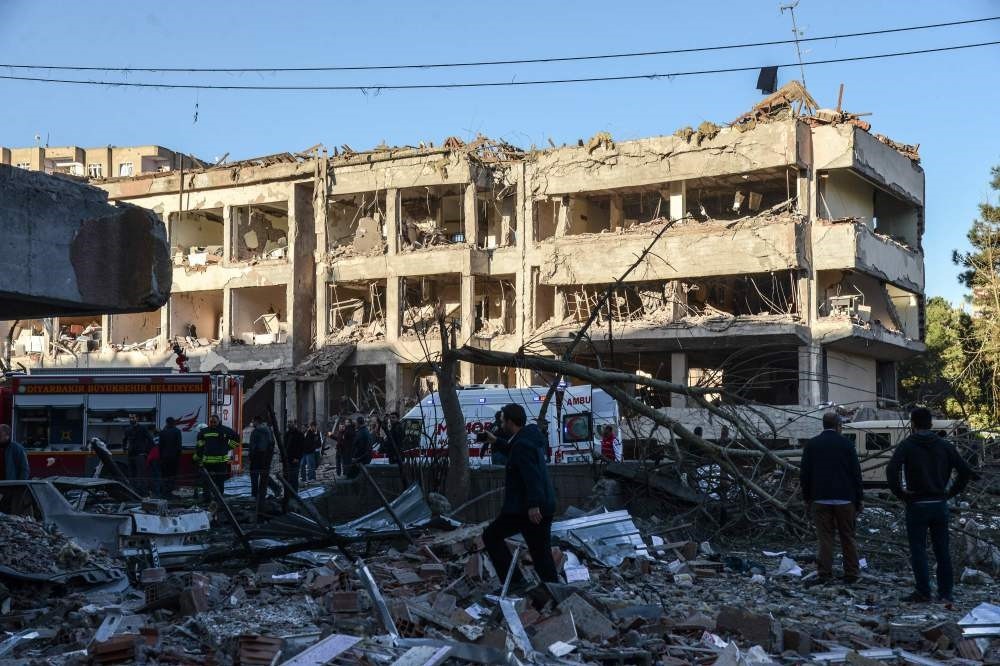 In the heart of Turkey's Kurdish southeast, the latest PKK bombing in Diyarbakır following the arrests of top deputies from the People's Democracy Party (HDP) early Friday morning in a major counterterrorism operation indicates that the PKK threat in Turkey has not abated.

For months, Turkey has warned HDP leaders and deputies that actively supporting the PKK terrorist organization is a mistake that could bring serious consequences - as we recently saw when some HDP mayors in southeastern Turkey were arrested on charges of employing PKK militants as municipal workers, providing them with logistical support for their terrorist propaganda. The said mayors even went as far as providing municipality-owned machinery to PKK terrorists for the purpose of digging ditches that militants have used to prepare for a "Kurdish uprising" in major cities and townships across Turkey's southeast.

On Nov. 1 in 2015, the Turkish people elected the deputies who are now under arrest, and they were elected under the premise that Kurdish national politicians do have a place in Turkey's legislature and that the Turkish people want to encourage their participation in democratic life within this country and to stop terrorism. Turkey has always said, "Let us bring these militants down for the mountains and give them the opportunity to participate in parliamentary activity to defend their cause." ...

However, the HDP never had aims to follow a peaceful course towards parliamentary talks or to convince the PKK to lay down its arms, give up terrorism and end the violence; especially in Turkey's eastern and southeastern regions.

To the contrary, what we are now seeing is that the HDP entered Parliament to assist the PKK in continuing with its terrorist secessionist plans.

The recently arrested HDP deputies were very vocal in their support for the PKK - even threatening the Turkish state on behalf of the terrorist organization. HDP deputies have attended the funerals of PKK terrorists; while some even attended memorial services for suicide bombers who killed innocent civilians in the heart of Ankara last year. These deputies even went to the extreme of using their personal vehicles to transport the weaponry of PKK terrorists, causing public outrage which further fueled the fiery exchanges between PKK terrorists and Turkish security forces which left many civilians in the crossfire.

Today, the HDP has proven that it is a political mouthpiece for terrorists waging a secessionist war against the Turkish state - terrorists who have no intention of pursuing goals of Turkish-Kurdish unity.

The HDP co-chairpersons have spread the viruses of enmity, begrudgement and sedition, encouraging people to take to the streets and wreaking havoc on civilians, bringing little benefit to their so-called Kurdish cause.

It is unfortunate that their actions have garnered the support of many western European countries led by Germany. Despite the EU having declared the PKK a terrorist organization alongside the U.S. and the U.N., this declaration has only been sustained in words and we are now seeing Belgium, the Netherlands, Germany and France treat the PKK as a legitimate group rather than a banned outfit.

Therefore, the HDP went on to become a political extension of the PKK in Parliament, failing to represent the Kurdish people and instead becoming a mouthpiece for terrorists. With the lifting of immunities from HDP deputies as well as several other parliamentary deputies who are suspected of having committed crimes, members and affiliates of the HDP should consider this a warning to steer clear of the murky waters of PKK propaganda and focus efforts on legitimate unity between Kurds and Turks in the country. Turkey's Kurdish minority was

given the chance to be represented in Parliament but what was expected did not happen. According to Turkish prosecutors, the HDP deputies were invited in for questioning but refused, continuing to actively support the PKK. Hence, the series of arrests of HDP deputies on Friday.

However, the fact that the PKK has responded to this by bombing people in the heart of Diyarbakır is clear proof that the PKK is closely affiliated with the HDP. The PKK has provided the proof to us on a silver platter.
Last Update: Nov 04, 2016 7:27 pm
RELATED TOPICS