PYD facilities will be Turkey's targets 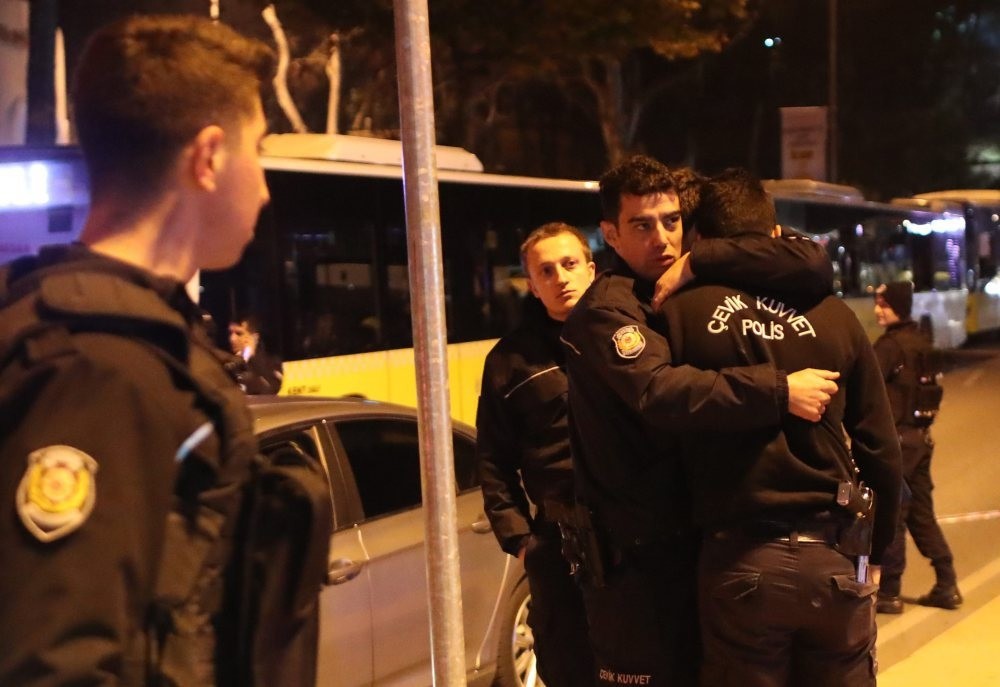 Police officers hugging each other after an explosion near Vodafone Arena Stadium in Istanbul on Dec. 10. Forty-four people were killed in an attack claimed by an offshoot of the PKK terrorist organization.
by İlnur Çevik Dec 13, 2016 12:00 am

Turkey should start hitting the bases, camps and command centers of the PKK in northern Syria in the Afrin region and the areas east of the Euphrates

The deadly bomb attacks by the PKK terrorist organization in Istanbul on Saturday that left 44 dead and more than 150 wounded have created deep anger and resentment among the country.Turkish people are angry and are feeling deep resentment not because the attacks could not be prevented but because Western countries and more shockingly our so-called allies are telling us they are solidly behind us in the fight against terrorism but when it comes to actions they pay lip service to the PKK.

There is no doubt whatsoever that the secessionist PKK terrorist organization was behind the two attacks in Istanbul. What is doubtful for the Turks in general is the sincerity of the messages of condolences and solidarity from our Western allies.

PKK is on the terrorist list of the United States and the European Union and yet we see, with shame and sorrow, that these countries allow the PKK to prevail on their soil with little trouble. This makes the Turkish people wonder and question the sincerity of these countries' statements.

The Syrian Kurdish Democratic Union Party (PYD) is an extension of the PKK in that country. Thus it is an integral part of the PKK terrorist organization. It provides training and logistical facilities for the PKK in northern Syria and it provides arms and ammunition to the secessionist outfit.

The PKK uses the PYD-controlled areas in northern Syria as a base to launch some of its terrorist attacks against Turkey. PKK terrorists are trained in the town of Kobani just a few kilometers from the Turkish border. Kobani is also used as an arms depot for the PKK. There is talk that one of the suicide bombers involved in the Istanbul bombing on Saturday was trained in Kobani and may well be a Syrian citizen.

This is no surprise as many PKK and PYD militants caught in Turkey during counterterrorist raids have confessed to being trained in Kobani.

So it is only normal that Turkey should start hitting the bases, camps and command centers of the PKK in northern Syria in the Afrin region and the areas east of the Euphrates.

This way we will be hitting them at their heart and they will start feeling some of the pain that they have been inflicting on our people.﻿

What is sad, however, is the fact that the U.S. is protecting and aiding the PYD that is helping the PKK launch terrorist attacks inside Turkey. The U.S. provides military training for the PYD, which are also being used to serve the PKK. The U.S. gives sophisticated arms to the PYD. Congress has just decided to aid the PYD with ground to air missiles. This is the same PYD that is involved in the Istanbul bombings.

In view of all this, how can an ordinary Turkish people believe the Americans when they say they are standing with us in the fight against terrorism when they seem to have been an accomplice in the Istanbul bombing?
Last Update: Dec 13, 2016 2:05 am
RELATED TOPICS