A new system that preserves the regime 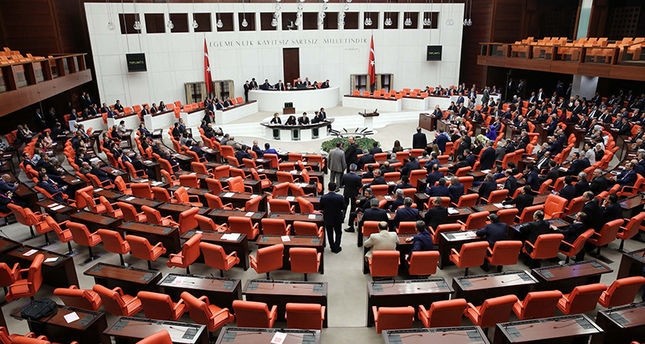 Turkey is in now on the way to change its administrative system but not its regime, and remains a secular and democratic republic

Parliament has begun debating the constitutional amendments that will usher Turkey into a system of administration that we hope will be a presidential arrangement.

After rowdy scenes at the Parliament Constitutional Commission, the amendments, which amount to changing 18 articles of the Constitution, recently cleared the commission hurdle and is now being debated in the house.

Debate on the amendments prepared by the ruling Justice and Development Party (AK Party) and revised to a certain extent by the opposition Nationalist Movement Party (MHP) started on Monday with the main opposition Republican People's Party (CHP) trying to stall the parliamentary activities by massing its supporters outside the entrance of Parliament to prevent deputies from getting into the compound. Of course, this failed as the protesters were removed by police.

Then the CHP tried to sabotage the first session to debate the amendments by raising procedural arguments. When that failed, the CHP created a tense atmosphere in the house floor to further stall the debates.

Despite the hard work of the CHP, the debates started with a delay of nearly five hours but in the end the house agreed with 338 votes to agree to start the debates. The 338 votes are crucial as it means the condition of the 330 threshold of passing the amendments subject to a referendum has been met. It means there were some defections in the AK Party and MHP ranks but still the amendments are safe.

This, however, also means both the AK Party and MHP parliamentary administrators have to keep close tabs on their deputies to avoid any serious defections in the future that would jeopardize the amendments.

The first day of debates show that the AK Party faces an uphill fight in Parliament but if the war is fought with determination and the MHP does not stall in supporting the changes the amendments may clear Parliament in February and we may face a referendum in May.

What has emerged in the preliminary debates in Parliament is that the CHP insists the amendments amount to a change of regime in Turkey. The Turkish Bar Associations, which are known to be an ardent enemy of the current government, also agrees with this. Such arguments seems to have been designed to convince the people of Turkey that the AK Party is trying to change the regime and the amendments boil down to this and thus have to be stopped at all costs.

The amendments in the Constitution in fact foresee a change in the administrative system where the president is the boss and forms his own government to run the country under parliamentary supervision. Meanwhile Parliament remains the sole legislative body as well as the only authority to supervise the administration.

The people of Turkey have given their verdict about the Erdoğan presidency and the system that the AK Party advocates when millions turned out in the streets of Turkey to halt a bloody coup on the night of July 15. That was the real referendum and the nation gave a massive vote of confidence to Erdoğan.

So Turkey is now on the way to changing its administrative system but not its regime. To suggest that this is not the case is simply the work of people with very bad intentions.
Last Update: Jan 11, 2017 1:42 am
RELATED TOPICS