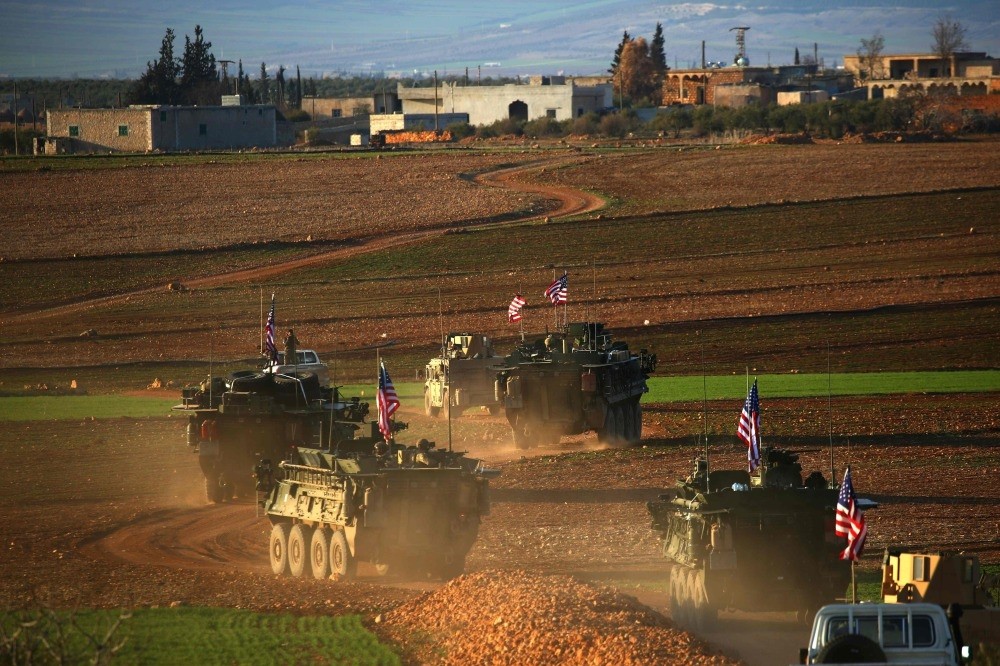 A convoy of U.S. forces' armored vehicles driving near the village of Yalanli, on the western outskirts of the north Syrian city of Manbij, March 5.
by İlnur Çevik Mar 08, 2017 12:00 am

Turkey had previously warned the regional actors about the possible threat of Manbij if it was left to the Syrian Kurdish terrorists. And now, this is where we are at

Manbij, the Syrian Arab town, was captured by the Kurdish People's Protection Units (YPG) militants about a year ago from Daesh and since then the Kurds affiliated with the PKK have been driving the local population, dominated by Arabs, from the settlement and have been replacing them with Kurds.

At the time Turkey had not started Operation Euphrates Shield to rid its border areas of Daesh but it had warned the Americans that the capture of the town, which is west of the Euphrates River, was unacceptable. The U.S. convinced Ankara that the Kurds were a part of the Syrian Democratic Forces (SDF) who would liberate the town and then pull out and return to the east of the Euphrates.

That never happened. On the contrary the Kurds settled into Manbij and simply pushed the Arabs and Turkmens out of the town. The U.S. simply remained a spectator to this charade.

However, the YPG played a sinister game and forged an agreement with the Russians to handover Manbij and its environs to the Syrian regime of Bashar Assad. They handed over the villages west of Manbij to the Assad regime forces and the Russians, but then in a surprise move, declared they would stay in Manbij and the Americans moved 500 troops into the town to defend the YPG gang.Thus they created a buffer zone between them in Manbij and the Turkish forces and the FSA. They also enlisted the help of the Americans to become their bodyguards in Manbij.

So what happened to the Russian declaration that the Kurds would move out of Manbij and handover the town to the Syrian regime? Why did our American "allies" move into Manbij to defend the Kurds from "foreign forces" outside of Daesh? Are Americans defending the Kurds against their NATO ally, the Turks?

What happened to the American promises that the Kurds would vacate Manbij and return to the east of the Euphrates?

The plot thickens and the puzzle becomes even more complicated.

The situation becomes so sensitive that in an unprecedented move the military leaders of Turkey, the U.S. and Russia assemble in the Turkish resort city of Antalya on Tuesday to prevent clashes between their forces in and around Manbij, al-Bab and Raqqa.

Meanwhile, President Donald Trump is trying to wrestle with reports presented to him by the Pentagon that presents various options for the U.S. to liberate Raqqa. The Pentagon reportedly is telling the president that they should be using the Kurdish militants affiliated with the terrorist PKK to do the job. That is the PKK that is regarded a terrorist organization by Washington.

Add to all this the fact that Iraq's Kurdistan Regional Administration's President Masoud Barzani, an ally of Turkey and the U.S., is at odds with the YPG and the PKK terrorists and says they have hijacked the democratic Syrian Kurdish movement and that he will counter them, the plot thickens even further and the picture gets even more complicated.
Last Update: Mar 08, 2017 2:56 pm
RELATED TOPICS