Does this mean Trump has shunned Turkey? 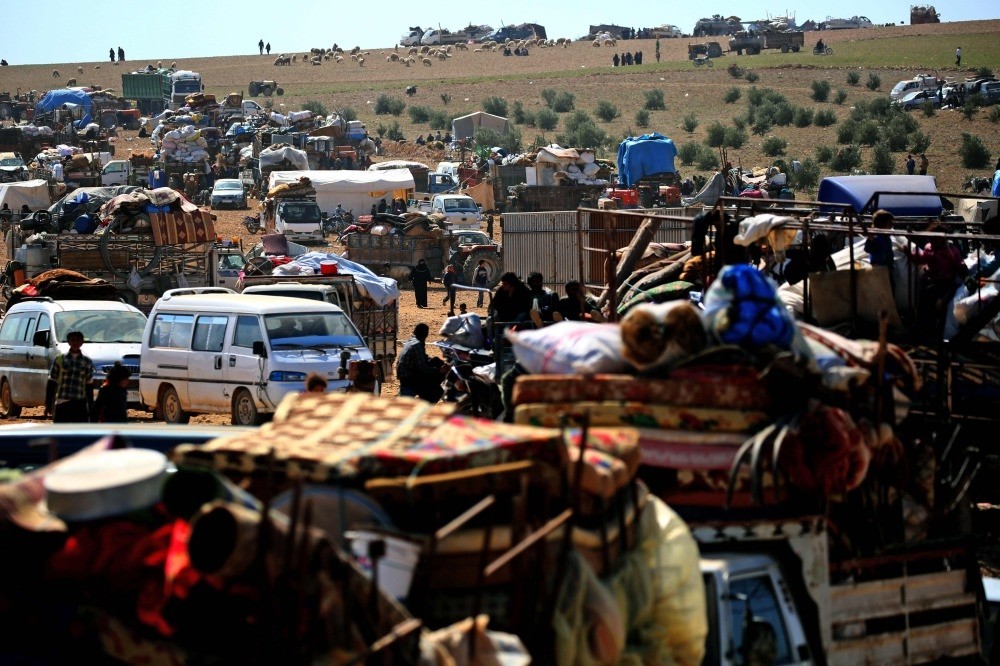 Displaced Syrians gathering at a makeshift camp for displaced people near the northern town of Manbij, March 8.
by İlnur Çevik
Mar 10, 2017 12:00 am

The expected divergence between the official figures of the 'establishment' and Trump's team has finally emerged as the U.S. is busy determining its plans for the Raqqa operation

American military officials have given every indication in recent days that they do not regard the Kurdish Syrian Democratic Union Party (PYD) or its military wing the Peoples' Protection Units (YPG) as a terrorist organization and certainly not an extension of Turkey's secessionist PKK terrorist group, which the US also regards as a terrorist outfit.

The American central command has been boasting about its affiliation with the Democratic Union Party (PYD) and the YPG on social media, showing off child soldiers with a caption reading "ready to fight" and pictures on how it is handing over heavy arms to these people.

To add insult to injury, they have also taken action to protect the YPG forces of occupation in the Syrian Arab city of Manbij, sending in 500 troops. American officials have said the force will protect the YPG forces against foreign forces and not against Daesh. Those foreign forces are clearly Turkey's soldiers that have captured neighboring al-Bab and want the Kurdish terrorists out of Manbij.

In recent weeks, American generals in Iraq have been briefing the American press that they have to carry out the operation against the Daesh-stronghold Raqqa with the PYD and not with Turkish forces supported by the Free Syrian Army (FSA). They have said the Turkish force and the FSA are "untested" and their performance in Raqqa would be suspect. They seem to forget that Turkish forces captured a chunk of land from Syria with the FSA, a mission that left the American forces green with envy.

U.S. President Donald Trump shunned a plan by the Pentagon to capture Raqqa with YPG help saying it was the work of amateurs and that he felt such a plan would be a massive fiasco. He asked the Pentagon to draw new plans and present them to him. The plans have apparently been presented to Trump, who is trying to make up his mind.

So in the midst of all this we suddenly see that the State Department is coming up with its own version of voicing support for the PYD and YPG. U.S. State Department Deputy Spokesperson Mark Toner says the U.S. continues to see the YPG and the PKK as separate entities and added that the U.S. will stay committed to their policy of supporting the YPG, while condemning the PKK. "We view the PKK as a foreign terrorist organization. We condemn the violence that it carries out against Turkish civilians and citizens," Toner added. "And separately, we have been working with the PYD, or YPG, rather, in parts of Syria as part of a number of groups we're working with who are actively fighting and dislodging Daesh or ISIL from territory it controls."

He was responding to a statement by Iraq's Kurdish Regional Government leader Masoud Barzani who said the PKK and the PYD are the same. Turkey has been telling this to the Americans for several years.

Toner did admit there are differences between the PYD and Washington saying, "That doesn't mean we haven't had disagreements with them when they try to hold territory or not – or declare semi-autonomous self-rule zones. We disagree with them on that and we have frank discussions with them about that."

What is important is that the support is very clearly there. So do all these statements and actions mean the State Department and Pentagon have launched a coup against Trump or do they mean the U.S. President has made up his mind to opt for the PYD and turn his back on Turkey?
Last Update: Mar 10, 2017 1:41 am