Mr Trump, if Assad is bad do something about it 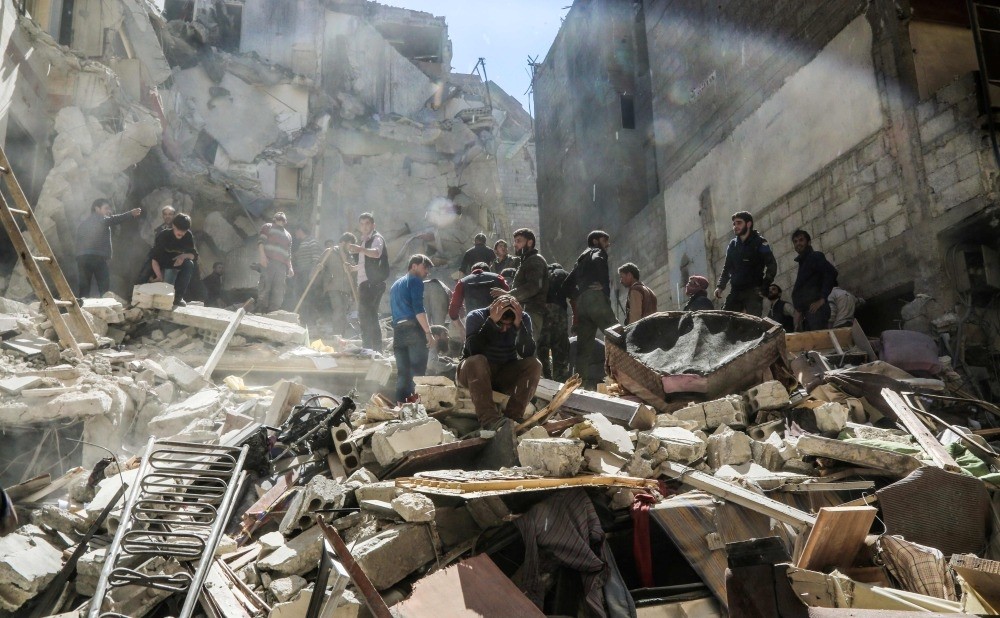 A Syrian man mourning as people search for survivors amid the rubble following the reported airstrikes on the moderate opposition-held town of Saqba, eastern Ghouta, April 4.
by İlnur Çevik Apr 07, 2017 12:00 am

U.S. President Donald Trump has broken his silence on Syria by strongly condemning the Bashar Assad regime for carrying out deadly chemical attacks in Idlib on Tuesday.Now the Americans have been rudely awoken to the fact that the issue in Syria is not just a struggle against Daesh but also against a deadly regime that has no regard for the lives of Syrian women or children.

While calling the attack "reprehensible" and intolerable, Trump reserved some of his harshest remarks for his predecessor, who he said "did nothing" after Assad crossed Barack Obama's own "red line" in 2013.

"These heinous actions by the Bashar Assad regime are a consequence of the past administration's weakness and irresolution," Trump said, referring to the fact that just four years ago, Assad got away with using chemical weapons against his own people, receiving only a reprimand.

At the time Obama had warned Assad that a chemical attack would cross a red line and trigger U.S. action.

Obama proved to be a paper tiger and instead of authorizing military action against Assad over a sarin gas attack that killed hundreds outside Damascus, the U.S. president opted to accept a Russian-backed agreement to remove the regime's chemical stockpiles.

This was in stark contrast to what the George W. Bush administration did by ordering the invasion of Iraq in 2003 to topple Saddam Hussein simply because Iraq was "suspected" of storing "weapons of mass destruction," including chemical weapons, which later proved false.

Of course, this is also an embarrassment for the Trump administration, whose U.N. representative Niki Haley has recently said that Assad's removal is no longer a U.S. priority.

U.S. Secretary of State Rex Tillerson, in Turkey last week, said Assad's future was up to the Syrian people. Much to their embarrassment the chemical attack suggests they now have to eat these remarks.

This is also the cause of deep embarrassment for the Russians who have been acting as mentors to the Assad regime.

They were supposed to keep Assad at bay while Turkey had the duty of restraining the Syrian opposition forces to help sustain the current cease-fire. This attack is a major threat to this truce.

Russian spokesmen are hopelessly trying to put the blame on the opposition Syrian forces, which they also realize is ridiculous.

The chemical weapons were dropped on the women and children of Idlib with jet fighters and helicopters. Who flies these in Syria besides the Russians and coalition forces?

Now Trump has to face the fact that Assad is as bad and as dangerous as Daesh and he has to act accordingly.

You cannot just blame Assad and the past performances of Obama and simply walk away. This is the time for him to directly consult Turkey and come up with a road map.

The U.S. and even the Russians cannot turn a blind eye to the facts in Syria. They cannot shed responsibility for protecting the Syrian people from Assad. Turkey is doing this in the most effective manner.

Turkey has done a marvelous job allowing 3 million people fleeing Assad's cruelty into the country and has spent $25 billion in five years for their safekeeping.

Turkey has entered Syria and created a safe zone for the Syrians fleeing Assad's massacres. And in all the mess created in Syria by the Iranians, Americans and the Russians, Turkey has emerged as a ray of hope.

Mr. Trump has to see this, Turkey is the remedy.
RELATED TOPICS