US should not misjudge Erdoğan's goodwill 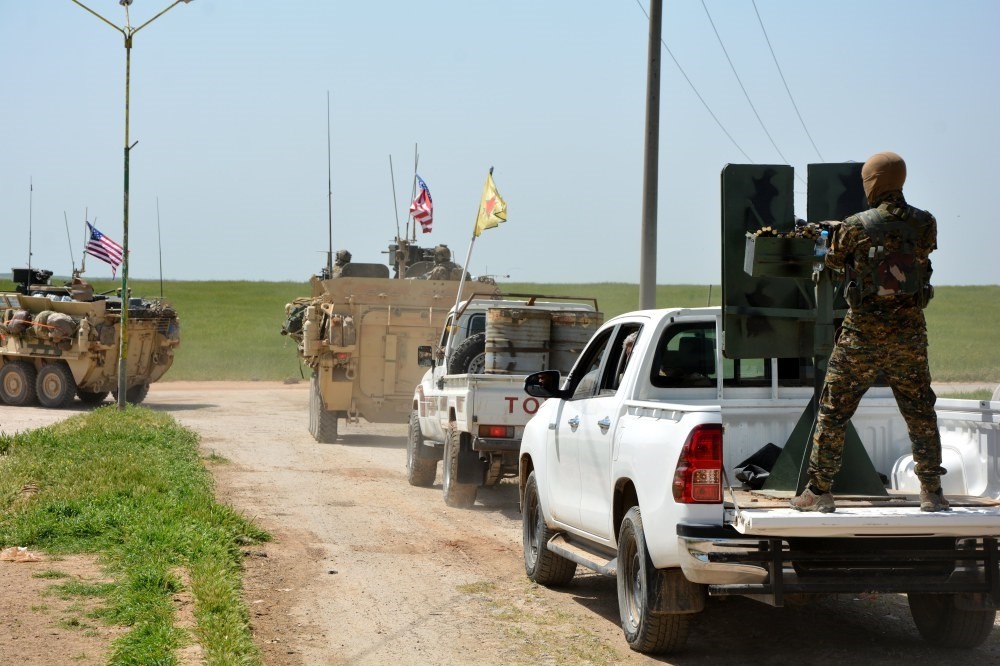 A convoy of U.S. army troops and the Kurdish terrorist group of the People's Protection Units (YPG), a PKK extension, patroling near the Syrian town of al-Darbasiyah at the Syrian-Turkish border, April 29.
by İlnur Çevik May 12, 2017 12:00 am

Before Erdoğan's visit to the U.S., Trump should correct the mistake of providing weapons to the Kurdish militant groups to help rebuild relations with Turkey

The Americans seem to have set their mind on continuing to cooperate with the militant Kurds of northern Syria with the pretext that they can defeat the Daesh radicals with these people, And they seem to think that they will find a way to put Turkish concerns at ease on the issue.

The problem is clear but hard to address. Turkey regards the Syrian Kurdish militants, who are being used by the U.S. to fight Daesh, as an extension of the PKK terrorist organization that has been waging a secessionist war on Turkish soil for the past four decades. Turkey says it has recovered weapons and caught terrorists who belonged to the Syrian Kurdish groups in anti-terrorism operations against the PKK. Turkey says sharpshooters from the Syrian Kurdish People's Protection Units (YPG) were caught while shooting at Turkish security forces. Turkey also says the suicide bombers who killed scores of civilians in Turkish cities led by Ankara and Istanbul were trained and armed in the Syrian Kurdish stronghold of Kobani.

Yet the Americans say they do not regard the Syrian Kurdish militants as terrorists or an extension of the PKK and thus will cooperate with them and use them as a force against Daesh. So to the frustration and horror of us Turks, they not only train them for combat but also give them heavy arms that will sooner or later be turned against Turkey in the hands of PKK terrorists.

The fact that President Donald Trump has signed an order to supply the militant Syrian Kurds with its weapons has now made it official that the new U.S. administration just like the Obama administration is set to go along with the terrorists simply because "they are our terrorists."

This has created fury in Turkey. It comes just as Turkey sent a high powered delegation to Washington to explain to the Americans Ankara's misgivings in detail. It seems to have fallen on deaf ears.

President Recep Tayyip Erdoğan is acting with unprecedented caution and patience simply to give his meeting with President Trump on May 16 a chance of salvaging the situation and make the White House understand the Turkish position and reverse the trend. But the Americans should be cautioned that when Erdoğan's patience runs out and people try to push him and his nation around, he will take irreversible decisions and will apply them to the bitter end. Erdoğan should not be pushed into this.

Some Americans have seen the storm clouds appearing on the horizon and are cautioning the U.S. administration but it seems the Pentagon and its allies think that they can address Turkish security concerns and put Ankara at ease, which is absolute rubbish. They told us lies to address our security concerns about 18 months ago when they said the forces that liberated the town of Manbij will include Syrian Kurdish militants and that these people will be withdrawn once the operation was over. That never happened and the Kurds settled in the town much to the discomfort of the residing Arabs and Turkey. Repeated Turkish warnings have been disregarded by Washington. Is this how you address the security concerns of an ally?

As if this was not enough, the spokesman of the coalition forces fighting Daesh in Iraq and Syria won't shut up at this critical stage and adds insult to injury by saying the U.S. will not recall the weapons it is issuing to the Syrian Kurds if and when they retake the Daesh stronghold of Raqqa. He adds that the U.S. will issue limited ammunition to these weapons and thus will see that they are only used in Raqqa. Is this man stupid? Doesn't he know that once you give people a rifle, they can find bullets on the black-market?

The Americans are creating the impression that they are toying with us. They are on a collision course and may soon see the repercussions after Erdoğan's U.S. visit.
RELATED TOPICS