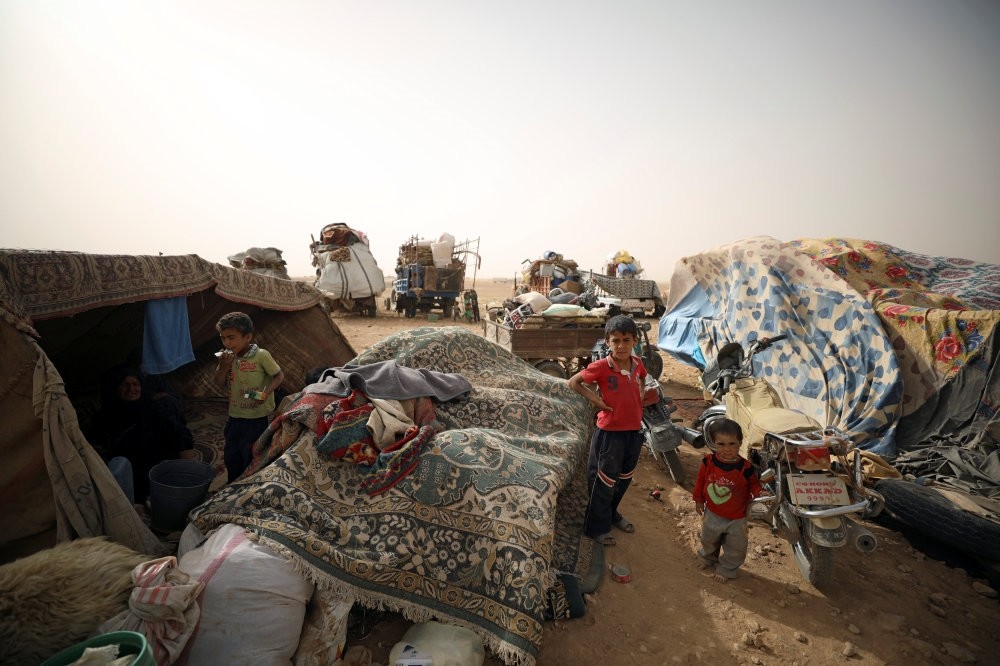 Internally displaced people who fled Raqqa, - the Syrian city devastated by the failed policies on the PYD and Daesh terrorists -, gather near vehicles carrying their belongings in a camp near Ain Issa, Syria, May 19.
by İlnur Çevik Jun 06, 2017 12:00 am

The U.S.'s policy of cooperating with the PYD/YPG in Syria is only opening the way for Daesh terrorists to act freely

The United States has been preaching to the world that its aim in Syria is to eradicate Daesh, which it says is a global threat.

It seems in this statement only the part about Daesh being a threat to the globe is accurate and yet, all the others remain as words while events show that U.S. actions in Syria are, in fact, not putting an end to Daesh but are helping them to continue their terrorist activities.

The freshman leader of the U.S., Donald Trump, recently told President Recep Tayyip Erdoğan that the U.S. is bent on destroying Daesh and that it will do this with the help of the Syrian terrorists, namely the Democratic Union Party (PYD) and the People's Protection Units (YPG), both close affiliates of the outlawed PKK, which is waging a secessionist war in Turkey. He said the so-called Syrian Democratic Forces (SDF), of which the PYD, YPG and PKK form the core, will liberate Raqqa, the city that is regarded as the capital of Daesh. He said the U.S. would provide all kinds of arms to the Syrian terrorists, but "assured" Turkey that these arms would not be used by the PKK against Turkey, which of course did not convince Erdoğan or anyone else in Turkey.

He also said the PKK would not be allowed to be part of anything in Syria. That statement remained in the air after it was announced that a wanted girl, who had joined the PKK in the Turkish mountains, posed with PKK leader Murat Karayılan and became a militant fighter, was killed in the clashes in Raqqa. A PKK member dies in Raqqa?

But things turned even worse for Trump as the Russians announced that the PYD and YPG agreed safe passage for Daesh fighters to leave Raqqa and thus regroup elsewhere in Syria. That means Daesh has been given a free hand to move its terrorist centers to other places and continue to direct terrorist actions and be a menace around the world.

The U.S. has remained silent over these developments, which means all this has the blessing of Washington. This means for every person to die under the guns and knives of Daesh terrorists around the world, the Syrian terrorists and the U.S. are as responsible for the bloodshed as the Daesh killers.

No wonder Daesh has been on the rampage in Britain. Over the weekend three Daesh militants set off on a killing spree in the heart of London, butchering seven innocent civilians. Britain has been the target for Daesh terrorists for the past few months.

Then there is the case of the Philippines where a Daesh "army" has recently captured a part of the country with the help of some local guerrillas.

In Turkey there was a Daesh terrorist plot in Ankara that was foiled by the Turkish police. It was clear that the orders for the plot were given in Raqqa.

Now Daesh will move out of Raqqa with the blessing of the PYD and the YPG and continue threatening the world.

Is this what President Trump envisaged when he signed an executive order allowing all kinds of arms (including heavy weapons) to be delivered to the PYD and YPG? Isn't he aware that all this makes him an accomplice?