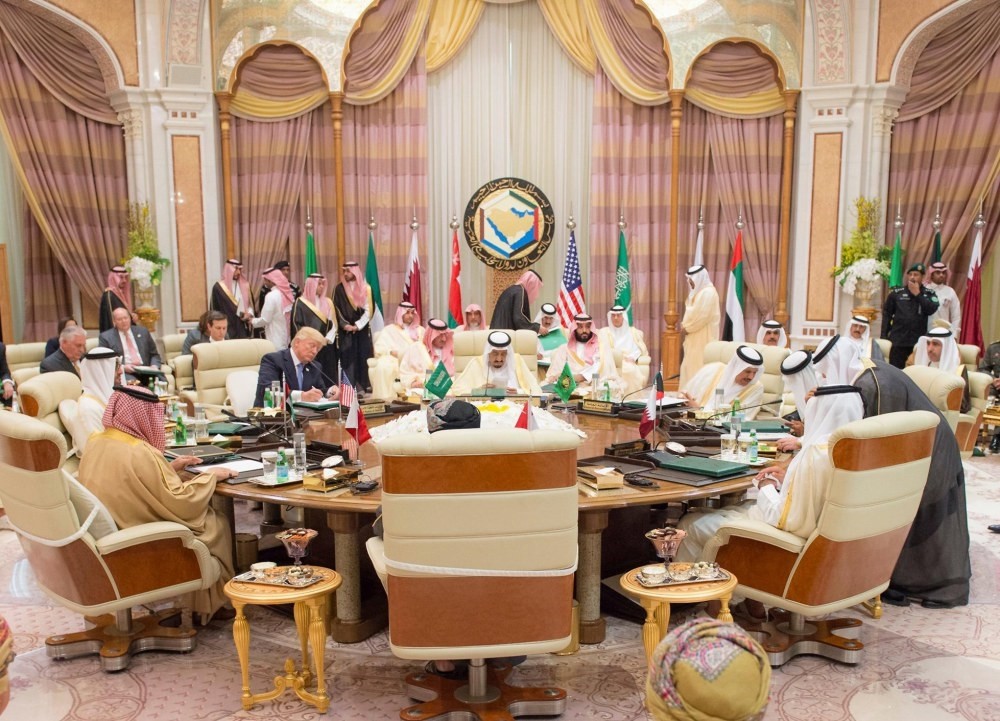 The leaders of the the Gulf Cooperation Council (GCC) and U.S. President Donald Trump seen attending the opening session of the GCC summit, Riyadh, Saudi Arabia, May 21.
by İlnur Çevik Jun 07, 2017 12:00 am

The Iranian expansionists, who are trying to cause trouble between Sunni Arab countries, are the predominant actors behind the decision to isolate Doha

Iranian expansionist aims have been clearly seen in the Gulf region, in Yemen, in Iraq, in Syria and in northwestern Saudi Arabia, to say the least.

But now we are seeing a new twist to the events as the brains behind Iran's expansionism are drawing a wedge between Sunni Arab countries.

In a shocking move on Monday, Saudi Arabia, the United Arab Emirates, Bahrain, Yemen, Egypt and one of the rival governments of Libya cut ties with Qatar and suspended all flights to and from Doha, showing that Iran's ploy to divide Sunni countries is paying off. Saudi Arabia also suspended the Qatari force in Yemen that has been fighting along side its soldiers against Shiite militants.

Saudi Arabia and its allies charge that Qatar has been serving Iranian interests in the region, has been critical of the Egyptian and Saudi regimes and has supported the Muslim Brothers organization and Hamas.

Qatar in return feels that while Iran's expansionism should be treated as a threat, it also advocates a mild approach toward Iran and tries to convince Tehran that a Sunni-Shiite conflict is to the detriment of all the region's countries and Islam.

The U.S. seems to be behind the Saudi move to punish Qatar for its milder attitude toward Iran. U.S. President Donald Trump has already drawn his battle lines against Iran and is making this obvious on every opportunity. The U.S., however, maintains a major military base in Qatar that is used for attacks carried out by coalition forces in the region and Washington says the status of this base will not change.

Turkey, for its part, maintains excellent relations with Qatar and Erdoğan was the first leader to call Qatari Emir Sheikh Mohammed Bin Abdulrahman al-Thani and consult with him on the crisis. Ankara also maintains good relations with Saudi Arabia and feels the current spat between Doha and Riyadh only serves to create cracks among Sunni ranks. So Ankara is making a diplomatic effort to help ease the current tensions. Erdoğan has also consulted Russian President Vladimir Putin on the issue.

The region is already on the rocks with the series of crises in Iraq, Syria, Yemen and the Israeli-Palestinian conflict. Another crisis is the last thing we need.

The way out has to be mending fences between Qatar and Saudi Arabia, ironing out differences and misunderstandings regarding their approach to Iran, clarifying Qatar's position on Hamas and the Muslim Brotherhood and addressing Saudi concerns as well as those of Qatar.

All of this is easier said than done, of course, but it is worth the effort, especially in this holy month of Ramadan as we preach affection, compassion, forgiveness, justice and peace. Turkey as well as Kuwait and Oman are making an effort to defuse the current tensions, efforts which should be applauded. We should not play into the hands of Iranian expansionists nor the forces who want to undermine Islam. The Saudis may well be justified in some of their objections, and yet, they too have to see that the current crisis only serves Iran's expansionism.