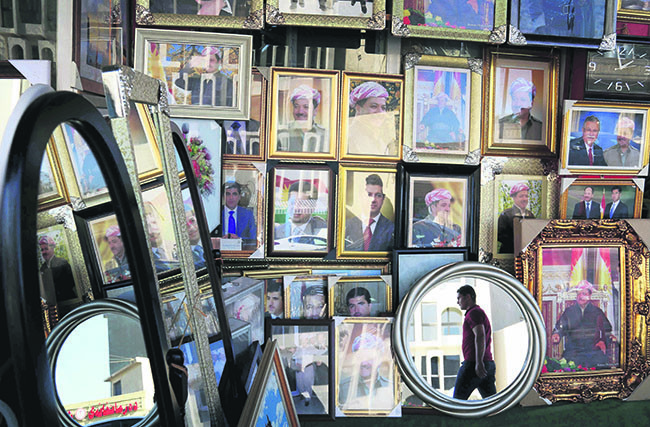 Portraits of KRG leader Masoud Barzani seen hanging in a store in Irbil, the capital of the autonomous Kurdish region of northern Iraq, June 8 (AFP Photo).
by İlnur Çevik Jun 23, 2017 12:00 am

The president of the Iraq's Kurdistan Regional Government (KRG) Masoud Barzani has declared that the Sept. 25 independence referendum cannot be scrapped or delayed and any action to halt it will make a bloodbath in the region. What he does not realize is that if he goes ahead with his threat to hold the referendum and then proclaim an independent Kurdish state on Iraqi territory, he will be leading his people in northern Iraq into certain disaster, which is the last thing we need in our volatile region.

The Kurds of Iraq, who have established their own autonomous region in Duhok, Irbil and Suleimaniyah, have managed to make a safe haven for their people since the First Gulf War. After the occupation of Iraq by the Americans that overthrew the Saddam Hussein regime, the Kurds have had an easy ride in Iraq. Their region was never hit by the violence that wreaked havoc in the rest of Iraq and thus they managed to form a relatively stable environment in their part of the country. They developed their own oil fields and managed to prosper in their own region.

However, they do have serious grievances that are understandable. The Shiite majority of Iraq has been systematically alienating not only the Sunni Arabs but also the minority Kurds. The central government of Baghdad is supposed to be a coalition of Shiite and Sunni Arabs as well as Kurds. But this has turned out to be an uneasy relationship where the Shiite does not treat the Kurds as partners. Besides, the central government was supposed to be paying 17 percent of Iraq's oil revenues to the Kurds but it has not done this on a routine basis and is using it as leverage on the Kurds.

The thing is, Baghdad has been in continuous disarray and thus the Kurds have always been kept in limbo. Added to all this was the confusion in the country after the invasion of a huge chunk of the country by Daesh, which has further added to the volatility of the country. So Barzani feels his people can no longer tolerate this situation and thus wants to go his own way. His representatives in Ankara, addressing a seminar on Wednesday, were saying that the approval of independence in a referendum would not mean the Kurds would declare a state overnight but would strengthen their hand in negotiating with Baghdad.

But that is not what Barzani said to French TV on Thursday. He said the Kurds can no longer wait and have to go their own way. If the Kurds are blocked, this will mean a bloodbath in the region. This is not true. The Kurds cannot afford to take on the whole world and try to impose their will on the international community. When the interviewer pointed out that Turkey, Iran, the U.S. and others oppose the referendum, he denied that was the case. Yet, that is the case. Only Israel has said it will not object to a Kurdish state in the north of Iraq but no other country has joined them. On the contrary everyone has vocally opposed it.

Turkey has tried everything to discourage Barzani from taking such a step. Yet it is interesting that Barzani has told his people that Turkey in fact is supportive of the referendum. Someone in Ankara has to repeat the fact that Ankara is deeply concerned that this referendum will bring catastrophe for the Kurds of Iraq. Turkey wants a united Iraq, not a divided one. The Kurdish leader is dragging his people into a great adventure where the outcome may well be that the Kurds will lose all the gains they have achieved in the past decade.