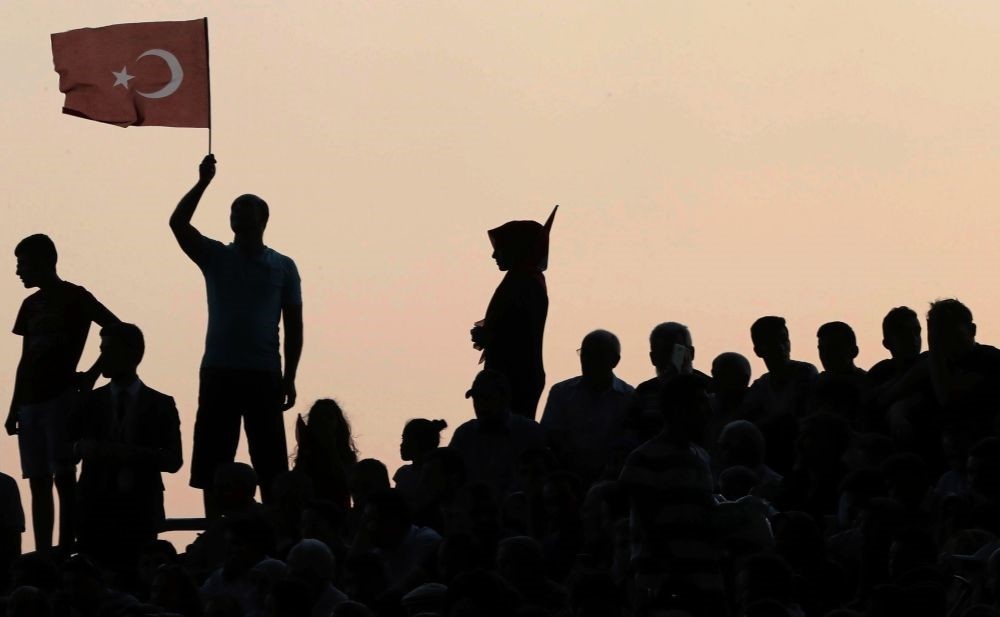 An AK Party supporter waves a Turkish flag during a ceremony to mark the 16th anniversary of their party's foundation, Ankara, Aug. 14.
by İlnur Çevik Aug 16, 2017 12:00 am

The Justice and Development Party (AK Party) celebrated its 16 years under the leadership of President Recep Tayyip Erdoğan. Its supporters call it the AK Party, which means the "clean, untainted and spotless party," while its adversaries prefer to call it simply the AKP.

Until 2002, Turkey was run by a handful of elite at home who had direct links with Western powers. The elite represented a minority of the electorate. Whenever this elite tried to run the country according to their own whims and policies, Western powers would simply stage a coup through the military and reprimand the elite. The silent and generally conservative masses of Turkey which formed about 70 percent of the voters were required to simply obey the elite and tow the line.

Thus Turkey became known in the West as a "military democracy." That ended in 2002. The AK Party, which was founded in 2001, was propelled into power in the 2002 elections as the silent masses of Turkey simply shut out the mainstream parties and performed a silent revolution.

Between 2002 and 2007 the AK Party performed a miracle pushing Turkey out of its shell and accelerating its development process in all spheres. Highways, airports, fast trains, communication facilities were built with great speed, health services and social services were revamped and suddenly Turkey leaped into a new era. Its booming economy, flourishing export markets, high growth rates became an envy of the world and thus propelled Turkey as the 17th largest economy in the world.

Political and democratic reforms put Turkey on the map.

However, the elite that had lost power simply could not digest the fact that the country was run by the conservatives who had the support of the masses. The West also started to see that the AK Party and Erdoğan were running the country according to their own policies and at times were falling at odds with general Western policies and interests.

So the Western powers unleashed a war of attrition against Erdoğan and the AK Party. The challenge by the elite to stall the election of Abdullah Gül as president, the attempts to shut down the AK Party through the Supreme Court after its landslide election victory in 2007 were all indicators of what was to come in the years ahead and they did.

Meanwhile, Erdoğan had started to see that the group of Fetullah Gülen was not to innocent and docile as it seemed on the surface. By 2010 the group had infiltrated all state office and institutions, had taken over the crux of the judiciary and the police force and had made headway in the military. When Erdoğan decided to shut down prep schools the Gülen group showed its teeth by vehemently opposing the move as they were running a major portion of the prep schools and earning hundreds of millions of dollars from them.

The elite that wanted to get rid of Erdoğan and the AK Party seemed to have ganged up with the Western powers to "finish off" the government. They unleashed the Gezi Park incidents in 2013 in Istanbul while the Gülen group turned into a criminal outfit and staged a silent coup against Erdoğan on Dec. 17 and Dec. 25 that year but failed. In 2012 the gang used its prosecutors and judges to arrest the head of Turkish intelligence who was conducting secret negotiations with the PKK to end separatist violence. The Gülen gang was out to "get" Erdoğan and the government.

Erdoğan was elected president with yet another landslide victory that forced the elite, the West and the Gülen gang to intensify their campaign to topple the AK Party government. This seems to have culminated with the July 15, 2016 coup attempt by soldiers affiliated to the Gülen gang. The bloody coup turned the Gülen gang into a terrorist outfit. Now the government has weeded out Gülen supporters from the state apparatus, have cleansed the military, the police force and the judiciary.

Now on its 16th anniversary, the AK Party is setting new targets to resume its reformation movement not only to revamp the party and its organizational structure but also revive the democratic and political reforms.