Turkey is the least of Barzani's worries 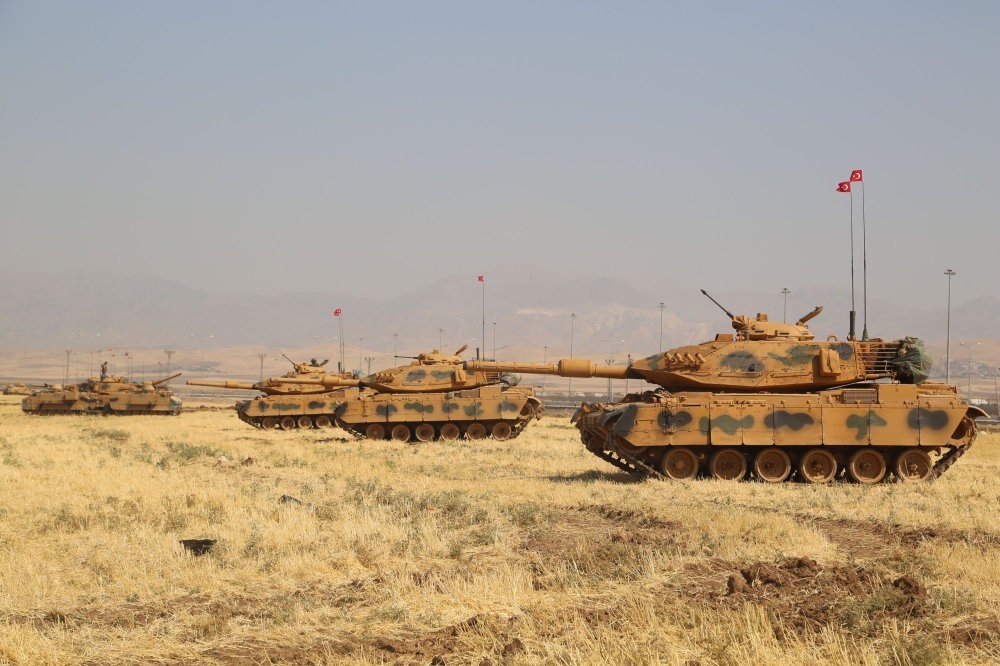 Turkish tanks seen near the Habur crossing gate between Turkey and Iraq during a military drill on Sept.18.
by İlnur Çevik Sep 22, 2017 12:00 am

Turkey worries about the future of Iraqi Kurds, thinking that Barzani's obsession with the independence referendum is getting them into deep trouble

The northern Iraqi Kurdistan Regional Government (KRG) is set to hold an independence referendum that may well usher the region into a new phase of instability much worse than the ones experienced before.

Masoud Barzani insists that there will be no negative effects of the referendum if and when the Kurdish region of Iraq declares independence and tells his people so. That is wishful thinking.

Turkey feels if the Iraqi Kurds make such a move it will create immense instability in our volatile region and Ankara is set to act. The Turkish National Security Council will convene on Friday as soon as President Recep Tayyip Erdoğan sets foot in Ankara after his trip to the United Nations Security Council and an official meeting with U.S. President Donald Trump especially where the referendum was discussed. After the NSC meeting the president will convene the cabinet which will review the measures Turkey will take if the Iraqi Kurds declare independence.

Turkey has been extremely facilitating to the Barzani administration providing it with financial assistance when the KRG failed to pay civil servants and was practically bankrupt. Turkey has allowed the Kurds to sell their oil through Turkey as Baghdad denied them their share of Iraq's oil revenues. Turkey feels Barzani should have heeded Turkey's warnings and should have never embarked on this dangerous adventure.

Turkey will sound the final and toughest warning to Barzani on Friday. Yet Turkey is the least of Barzani's worries.

Some people around Barzani suggest that Turkey is anxious because if the Kurds of Iraq declare independence this will set a bad precedence for the Kurds of Turkey and that it will stroke up the secessionist tendencies in our country. Turkey does not have such worries because Turkey is aware that it is the country of attraction even for the Iraqi Kurds.

What Turkey is really worried about is what others in the region will do to the Kurds of Iraq.

Barzani is playing with fire as he includes Kirkuk in his independence adventure. He is inviting a fatal armed conflict where the Iraqi central government could well unleash its Hashd al-Shaabi Shiite militia forces against the Kurds. That would be a very bloody affair and would result in the Baghdad forces driving their assault in other areas that will create havoc throughout the northern regions of Iraq.This means the Turkmens of Kirkuk who are defenseless and who have no serious militia force will be in serious jeopardy. Turkey cannot stand idle if that happens.

Then there is the Iranian factor. Iran is dead set against the referendum and will punish the Kurds by creating instability in Dohuk, Irbil, Sulaymaniyah as well as Kirkuk.

So with all these at stake Turkey feels Barzani is getting himself into deep trouble which he cannot handle. When that happens Turkey also fears that the PKK which is waging a secessionist war in Turkey for more than three decades and has set up bases in the Qandil Mountains and Sinjar province in Iraq will exploit the situation and try to gain ground in the rest of the KRG region. This cannot be accepted or tolerated by Turkey.

Turkey feels that at the end of the day the mess created in northern Iraq will mean carnage, suffering and will force tens of thousands of Kurds to flee to Turkey which has hosted Kurds before. This is the situation that Barzani will create with his policy to stage an independence referendum and this is what Turkey is concerned about.