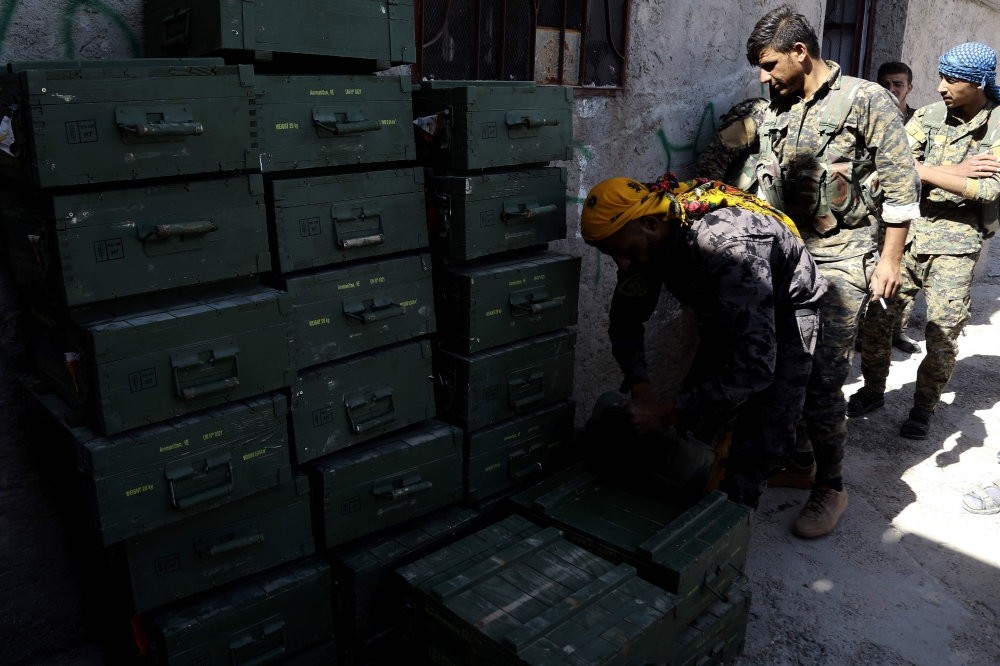 Syrian Democratic Forces (SDF), made up of an alliance of PKK-affiliated YPG fighters, unload boxes of ammunition supplied by the U.S. in a village north of Raqqa, June 7.
by İlnur Çevik Nov 22, 2017 12:00 am

Ankara is determined to do whatever it takes to ruin the PKK and its U.S. backed affiliates' plan to form a statelet in northern Syria

The PKK terrorist organization, which has been waging a secessionist war against Turkey, seems to be testing the Turkish resolve in northwest Syria's Idlib and Afrin where its affiliates, and the Democratic Union Party (PYD) and the People's Protection Units (YPG) are trying to harass Turkish forces and disrupt peace in the region.

PYD, YPG and PKK militants have hurled mortar bombs at Turkish forces imposing a no-combat zone in Idlib along with the Russians and at civilian settlements in the area. This is clearly an act of defiance and a challenge to Turkey in the region. The latest incidents also justify Ankara's concerns that the PKK, PYD and YPG trio is a menace in the area and must be removed just like Turkey pushed Daesh out of the region.

The PKK wants to hold on to Afrin and challenge Idlib as it still tries in desperation to create a mini state in the north of Syria with an outlet to the Mediterranean Sea. The fact that Turkey and Russia have agreed to bring peace to Idlib by creating the no-combat zone has been a source of deep disappointment for the Kurdish militants of Syria.

It is sad that the Kurdish militants are using arms given to them by the U.S. to fight Daesh in Raqqa. The Americans know very well that the PYD and the YPG are in fact the PKK, yet they are pretending that this is not the case. They turn a blind eye to the fact that PYD and the YPG displayed huge posters of PKK chieftain Abdullah Öcalan in Raqqa.

But facts are facts. The organic ties between the American-backed YPG and terrorist group PKK surfaced once again on Monday, as Zozan Temir, a terrorist once in the ranks of the Syrian affiliate of the separatist group, was killed during Turkish anti-terror operations in southeastern Turkey.

The 24-year-old Syrian from Kamışlı (Qamishlo) in northern Syria first joined the ranks of the YPG four years ago, as she mentioned in a video circulating on social media. In recent anti-terror operations, a terrorist among the ranks of the PKK was killed in Turkish territory, and her identity was revealed by Turkish security forces as Zozan Temir. Her real identity was also revealed in PKK-linked websites along with the nom de guerre she used, Zozan Cudi.

These issues will of course be brought to the attention of the Russian and Iranian leaders when President Recep Tayyip Erdoğan meets with them at a summit in the Russian holiday resort city of Sochi. The leaders will be discussing the future of Syria and the Russians seem to be interested in including the Kurdish militants in the process. That is unacceptable for Turkey in view of the presence of the PKK secessionists in the whole process.

Turkey is not against the Kurds of Syria. In fact, this was an issue that initially put Erdoğan and Syrian leader Bashar Assad at odds. Erdoğan had told Assad he should not turn a blind eye to the rights of the Kurds in Syria. But Turkey is against including the PKK, the YPG and the PYD in any peace process which have hijacked the Kurdish political movement in Syria. The Russians along with the Americans have to see that the Kurdish militants do not mean well and are a direct threat to Turkey. This cannot be tolerated.