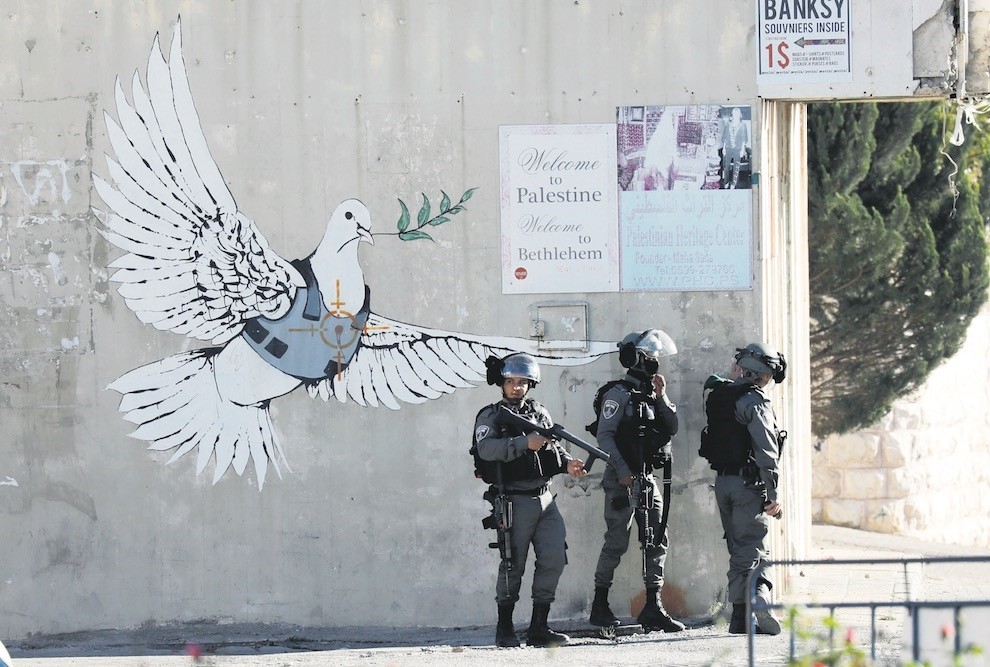 Israeli soldiers stand during clashes with Palestinians in the West Bank city of Bethlehem, Dec. 9.
by İlnur Çevik Dec 12, 2017 12:00 am

Under the leadership of PM Netanyahu, Israel has no excellent records in standing with the oppressed of the world or fighting for freedom and justice

Yesterday was Human Rights Day, yet the basic rights of an individual, which are the right to live, the right to feel secure and the right to shelter, are being violated throughout the world and especially in our backyard, the Middle East.

Look at what has happened in Syria. People have been butchered in the tens of thousands by the Assad regime, cities have been raised to the ground, people have been forced to flee to neighboring countries, and American bombers have demolished Raqqa, killing civilians in the name of fighting the Daesh terrorist group. PKK-affiliated terrorist groups have performed ethnic cleansing in Arab and Turkmen villages under the watchful eyes of their U.S. allies. Iraqi cities have been destroyed; an ancient Islamic civilization has been wiped out.

Yet, it seems the worst is still to come in Palestine and Jerusalem.

Through a war of attrition spread over the decades, Israel has plucked away land from the Palestinians to the extent that no land has been left where they can declare a state of Palestine. Most of the West Bank, which has been under Israeli occupation since 1967, has been chipped away as Israel built settlements on Arab land and usurps Palestinians lands. The U.S. and the European states have pretended to oppose the settlements but have always paid lip service to the Israelis to continue this process.

In the 1967 war, Israel had occupied east Jerusalem and now claims it has annexed these lands against United Nations Security Council resolutions dated 1980, which was not vetoed by the Americans. Yet the same Americans, under Donald Trump's leadership, now say they recognize Jerusalem as the capital of Israel. That suggests they also approve of the annexation of Jerusalem.

The West has not cared for the plight of the Palestinian masses and has been extremely insincere over the issue. That also is valid for many Arab countries that claimed they support the Palestinians but in fact collaborated and are still collaborating with Israel.

Iran has been the only country that has actually challenged Israeli policies against the Palestinians, but then also demanded the destruction of the Jewish state.

Turkey, on its part, says Jews have a right to have their own state and live behind secure borders, but it vehemently opposes Israeli policies to invade Arab lands and change the status of Jerusalem.

Turkey has always proven its quality as a state that has stood by the oppressed and the underdogs throughout history. The Ottoman Turks saved the Jews and gave them shelter when they were pushed out of Spain by the Spanish Inquisition. The Turks have repeatedly provided refuge to the Jews who were subjected to discrimination throughout Europe. German Democrats and Jews fleeing Hitler's wrath were welcomed in Turkey during World War II.

President Recep Tayyip Erdoğan and Turkey have excellent records in standing with the oppressed people of Syria, giving refuge to 3 million of them, helping the butchered Muslims in Myanmar and rushing to help Africans in need. What do you have to show as an act of benevolence to humanity Mr. Benjamin Netanyahu?