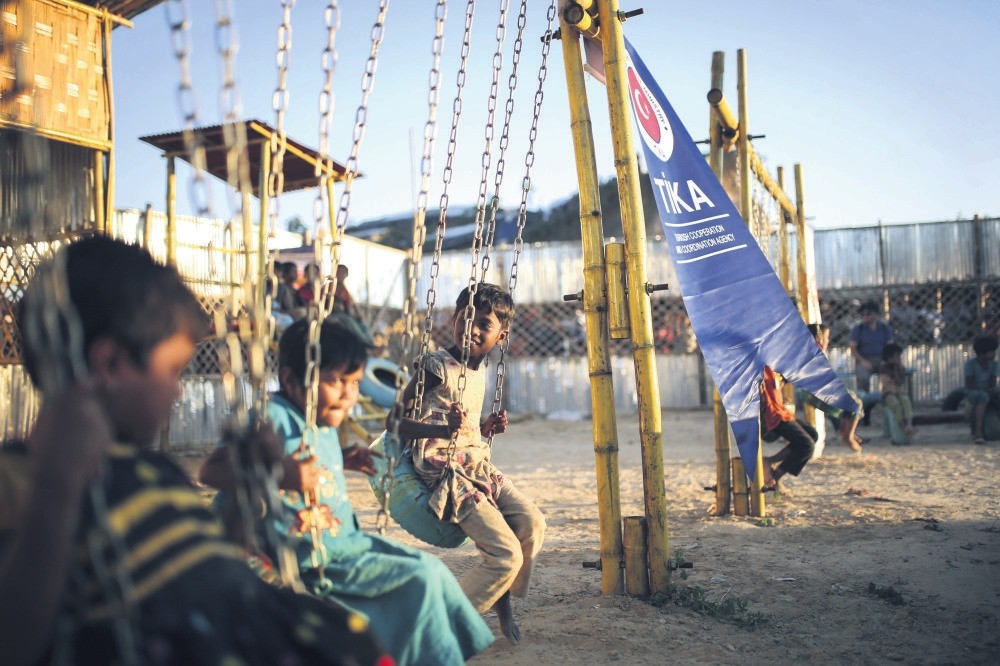 Rohingya refugee children sit on swings in a playground established by the Turkish Cooperation and Coordination Agency (Tu0130KA), Bangladesh, June 6.
by İlnur Çevik Dec 19, 2017 12:00 am

Today Turkey is the only country that has an immaculate record in dealing with migrants by handling them with compassion and understanding.

Turkey does not only care for the 3 million Syrian migrants who have had to flee the civil war in their country but has been a home for 1 million more migrants from all over the world, practically from 190 countries. Above all that Turkey has been tending to the hundreds of thousands of Myanmar Muslim migrants in Bangladesh who have fled the country due to the atrocities committed by the government as well as migrants all over Africa.

Turkey has become the leading aid donor of the world in terms of assistance it provides for migrants in view of its gross domestic product.

So Turkey has a very clean record regarding the way it handles the problems of migrants which has reached crisis proportions in many Western countries.

The first reason is the way the Turks approach migrant problems for the past few centuries. It was the Ottoman Turks who gave refuge to the Jews fleeing the Spanish Catholic butchery. This is because Islam requires Muslims to always extend a helping hand to the oppressed and especially migrants as the Arabs of Medina helped out the supporters of Prophet Muhammed who fled from Mecca after facing oppression.

The other is the fact that Turkey has never been a country that has oppressed people of other lands and created discord to force people to flee their lands. Turkey has never been involved in colonialism and imperialism. On the contrary, Turkey under Mustafa Kemal Atatürk and now under President Recep Tayyip Erdoğan has been fighting colonialism, imperialism and the suppression of nations by world powers.

It is rather sad that modern time colonialists and imperialists are the very reason why there are migrant problems in the world. They create discord and malice in various countries, and divisions that lead to civil war, thus destroying the established order in a bid to redraw the map of the Middle East. However, their actions do not only destroy the most vital centers of Islam like Baghdad, Mosul, Damascus and Aleppo but they also force people to flee their homes and move to other countries. The same is also valid for Libya and many other countries.

So at the end of the day people end up being migrants and try to seek peace and security not only in Turkey but in Europe. Thus, you have people trying to cross the Mediterranean Sea in dinghies to get to the shores of Europe. Many end up drowning in the sea.

It is ironic that instead of facing the realities that migrant problems have been created by their own actions and policies, the people of Western countries do not only shut their doors to the migrants but they also support right-wing parties that fan xenophobia and Islamophobia. Isn't it sad that a far-right coalition has been set up Monday in Austria that has declared it is against migrants and Islam as the international community marks International Migrants Day?