Turkey has to cope with YPG killers 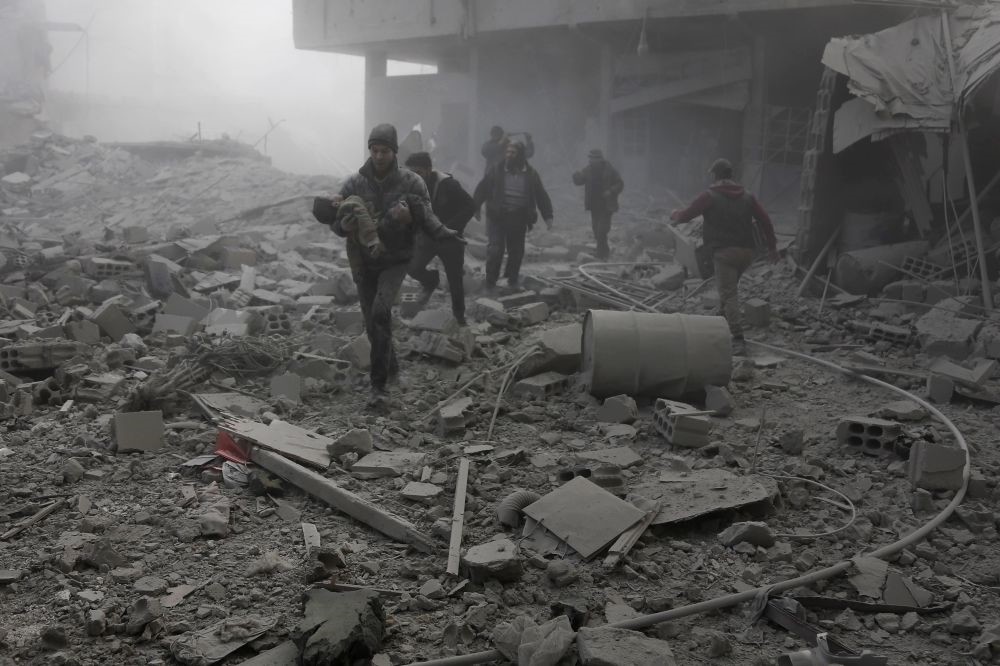 A man carries a child after digging him out of the rubble following an airstrike on Hamouria, in opposition-held eastern Ghouta, near Damascus, Jan. 9.
by İlnur Çevik Jan 12, 2018 12:00 am

If Turkey wants to provide security to its own people and state, it needs to take some precautions against the YPG threat in Syria

Turkey faces two major challenges in Syria that have a potential of ruining the positive atmosphere that has been created in the past few months thanks to the cooperation between Turkey, Russia and Iran. One is the open intransigence displayed by the Assad regime backed by Russia and Iran and the other is the defiant attitude of the militants of the People's Protection Units (YPG) in northeastern Syria who have grabbed 40 percent of Syrian territory with American help.

The fragile peace process in Syria is again under threat. The positive developments that started with the Astana meetings and culminated with the Sochi summit between Turkey, Russia and Iran had brought hope that a genuine and effective peace process was in the making.

It was clear that the United States was unhappy with all these developments and allowing Russia to get the upper hand in Syria. So it was inevitable that the U.S. would do their best to sabotage the process.

Yet it is strange that the Assad regime has been allowed to continue its killings in Idlib, attacking villages, bombing civilians and trying to grab the local airport. The Assad regime should have been dissuaded by Russia and Iran not to undertake such attacks and spoil the positive atmosphere. A Turkish military convoy has also come under attack by unknown militants in Idlib where Turkey and Russia are enforcing a no-combat zone.

It is also strange that the Russian air bases have also come under attack by several unmanned aerial vehicles (UAVs) that have destroyed jets and inflicted heavy damage. It was a concerted and well executed attack which is very strange. Who has such capability in the region? The natural culprit would be the U.S. which is very unhappy that Idlib is being controlled by Turkish and Russian forces that deny access to the YPG militants to the Mediterranean Sea.

Despite all this, Turkey still expects Moscow and Tehran to put weight on the Assad regime and end this intransigent behavior.

The American presence in Syria hinges on the YPG militants of Syria. The Americans have cooperated with the PKK terrorists and their Syrian affiliates, namely the Democratic Union Party (PYD) and its armed wing, the YPG. They have allowed the PYD/YGP elements to do ethnic cleansing, butcher Syrian Kurdish politicians who disagree with the PKK and run their enclaves with an iron fist. They have provided PKK-affiliated militants weapons and equipment that was carried into Syria from northern Iraq in 4,000 trucks. They have allowed the terrorists to grab Arab lands like Raqqa and transform them into terrorist areas.

They have done this knowing the PKK is a terrorist secessionist organization that has targeted Turkey for the past four decades.

That is why President Recep Tayyip Erdoğan questioned the so-called strategic partnership between Ankara and Washington and said Turkey is fed up with being misled and fooled by the Americans.

This means that soon Ankara will put aside all other considerations and push into Afrin and even Manbij to clear away PKK terrorists and end this charade. The best the Americans can do is to step aside and allow Turkey to do its job.

Ankara is serving notice to the Americans, the Russians and Iran that it will not tolerate any fait accompli in Syria.