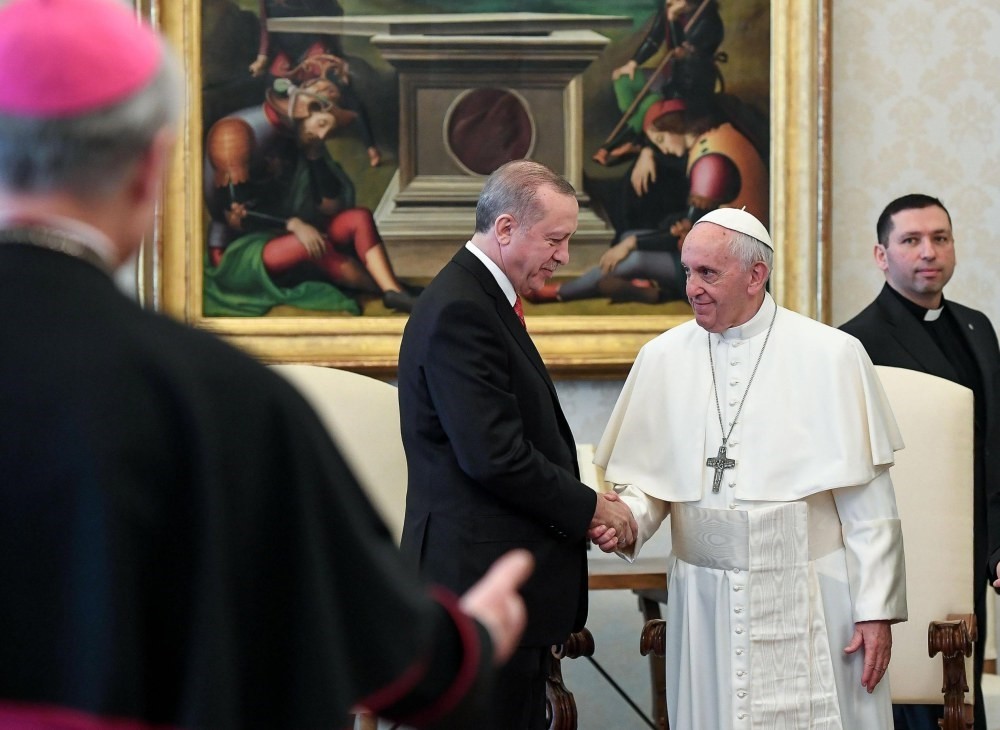 President Recep Tayyip Erdoğan met with Pope Francis at the Vatican and discussed the status of Jerusalem at length. This is history in the making. It is the first ever visit by a Turkish head of state to the Vatican after Turkey and the Holy See established diplomatic relations in 1960. President Celal Bayar visited the Vatican in 1959 and opened the way for the establishment of these relations.

Erdoğan spearheaded the Islamic world's action at the United Nations General Assembly to oppose the decision by U.S. President Donald Trump to declared Jerusalem as the capital of Israel and that the U.S. will move its embassy from Tel Aviv to this ancient city. The move also received support from the pope, the spiritual leader of Catholics around the globe.

The Vatican says Jerusalem, which is a major holy city for the Muslims, Christians and Jews, should be granted a special status where people of all religions can worship freely. Thus, it is opposed to the city becoming exclusively a Jewish entity where Muslims and Christians are left to the whims of the Jews.

Turkey agrees with the Vatican and says Jerusalem could be the joint capital of Israel and Palestine.

But Jerusalem was not the only issue on the agenda. Erdoğan explained the reasons why Turkey had to launch Operation Olive Branch in the northwestern Syrian region of Afrin just across the Turkish border. Ankara hopes to secure the support of the Vatican on Afrin with the explanation that it is not invading another country, but is rather actively striving to cleanse the area of terrorists and allow suffering Syrian civilians to go back to their homes. Turkey evicted Daesh terrorists of from its border in Operation Euphrates Shield and turned the region into a safe haven for Syrians. It aims to do the same in Afrin.

Besides this, the Vatican had lauded Turkey's efforts to end the massacre of the Rohingya Muslims in Myanmar. The Vatican had also applauded Turkey for the way took in 3,5 million Syrians fleeing the civil war in their country for the past six years and has spent $30 billion on them.

Erdoğan discussed the plight of the Christians minorities in the Middle East and promised to mobilize Turkish support to help them in every possible way, just as the Ottomans did in their 600-year history.

This of course brought the president to the issue of the rising tide of Islamophobia in the West. He asked the pontiff to help Muslims and stand up to this situation, which could turn into a disaster in most areas of Western Europe. The problem that started as xenophobia has mushroomed into enmity toward all Muslims, especially in Germany, the Netherlands, Belgium, Austria and France. The Vatican has also drawn attention to the problem, but Turkey wants a concerted and continuous international effort to fight Islamophobia.

Erdoğan found an attentive ear at the Vatican. Both Turkey and the Vatican under Pope Francis have been separately working to support oppressed people and the needy around the world. The Vatican has massive moral influence among Catholics in addition to financial resources. Turkey is a major player in the Islamic world with much clout. Now they can cooperate and join forces in the mission to help the oppressed.