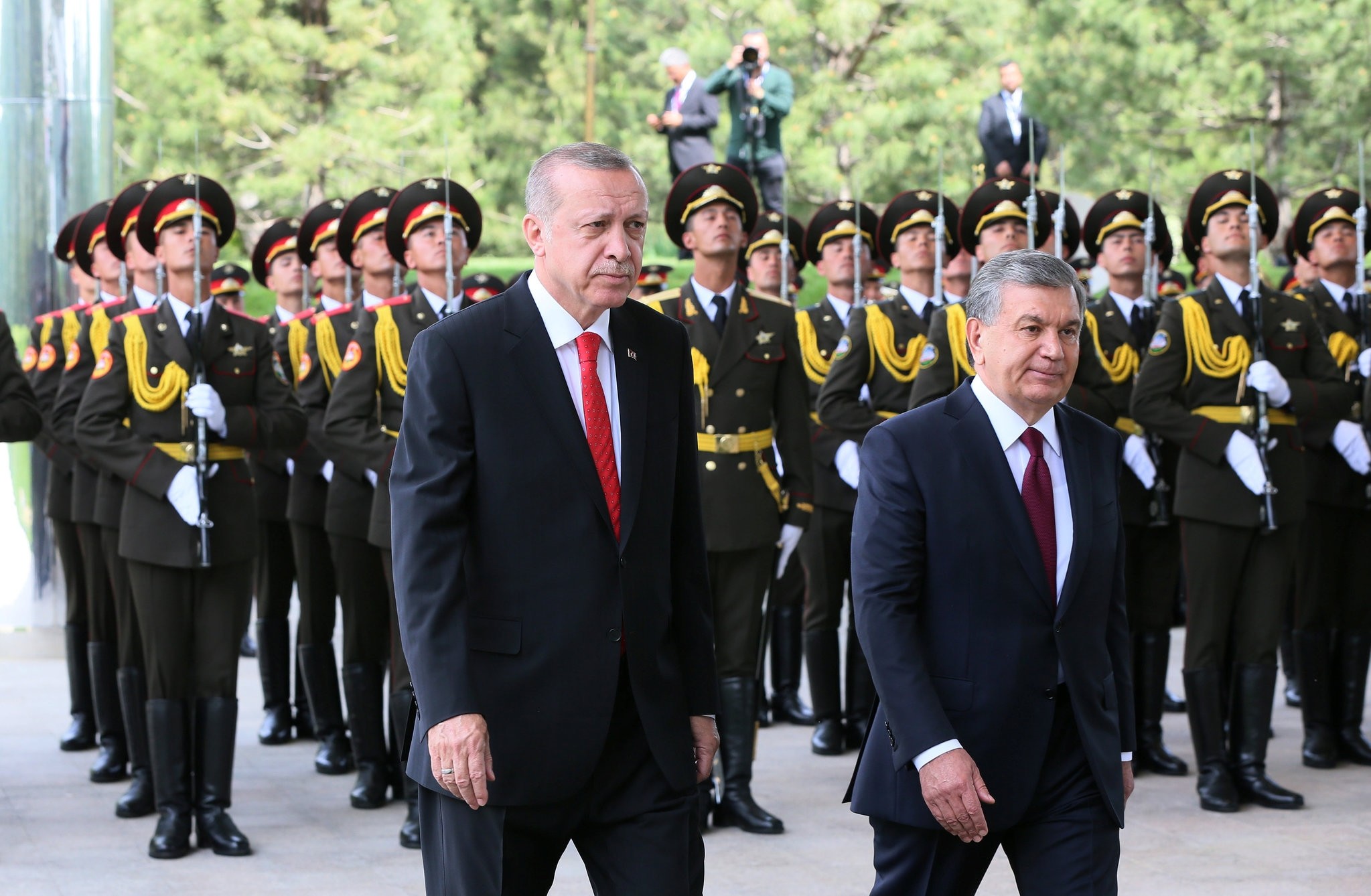 President Recep Tayyip Erdou011fan is welcomed by his Uzbek counterpart Shavkat Mirziyoyev in Tashkent, Uzbekistan April 30.
by İlnur Çevik May 02, 2018 12:00 am

Uzbekistan has shed past trust issues with Ankara and entered a new strong, strategic relationship with Turkey in the heart of Central Asia. That sums up the visit of President Recep Tayyip Erdoğan to Uzbekistan which was marked by a very warm welcome by Uzbek President Shavkat Mirziyoyev.

The Uzbek administration was disappointed with Turkey in the 1990s and former President Islam Karimov had deep suspicions about Turkey and was reluctant to forge close ties with Ankara. After his death in 2016 Mirziyoyev took over as caretaker president and started a very impressive reform movement called the "Quiet Revolution" and the "Revolution from Above."

Mirziyoyev abolished cotton slavery, systematic use of child labor, exit visas, introduced tax reforms, created free economic zones and declared amnesty for political prisoners. He dramatically improved relations with neighboring Tajikistan, Kyrgyzstan and Afghanistan. The Uzbek economy is now in a transition phase switching to a market economy.Mirziyoyev set the course for improving relations with Turkey and hosted Erdoğan in Samarkand where the two put the ties on a new course. This was crowned by Mirziyoyev's visit to Ankara last September when the two countries established a strategic relationship. During the current visit, Erdoğan and Mirziyoyev strengthened the infrastructure of this relationship with a series of agreements on economic cooperation as well as defense. Twenty-five agreements were signed during this trip as the trade volume between the two countries expanded by 20 percent this year.

Speaking in Uzbekistan's capital Tashkent, Erdoğan said the meeting of the Turkey-Uzbekistan High-Level Strategic Cooperation Council will be held annually, with the first to be held in Turkey. He also said Turkey remains determined to boost bilateral ties "from economy to the defense industry, education to culture, environment to energy, agriculture to tourism, in all areas."

The fact that Uzbekistan has decided to join the Cooperation Council of Turkic Speaking States is a major step for Erdoğan. This represents a major breakthrough for Turkey in its bid to expand its regional influence in Central Asia.

"We have long negotiated with President Erdoğan. Uzbekistan's flag will also be among the flags in this council. Uzbekistan will also attend the meeting in Bishkek, this is an important decision," the Uzbek president said.

Erdoğan has followed a steady course of trust building in Central Asia over the years. His successful visit to Uzbekistan shows this policy is paying off.