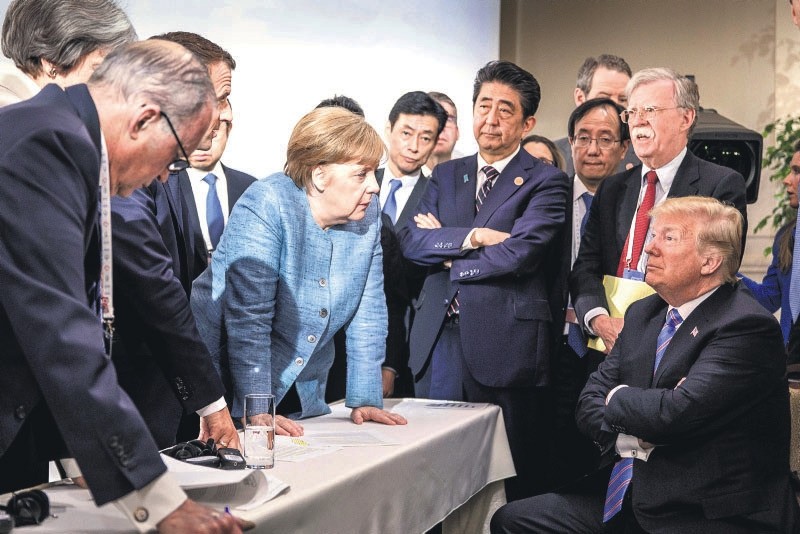 The G-7 summit demonstrated that under President Donald Trump, the U.S. is turning its back on historic and trusted allies while alienating itself from an increasingly united Western world

The G-7 meeting in Canada has turned into a complete nightmare as U.S. President Donald Trump continued to bully world leaders and defy international norms. Trump practically walked out of the summit and refused to take part in the joint declaration.

A photo showing German Chancellor Angela Merkel looming over Trump, her hands set on a table and Trump sitting with his arms folded across his chest as she is flanked by the British, French and Japanese leaders speaks for itself.

Soon after coming to office, Trump sowed the seeds of global discord by first shelving the Paris Accord on climate change and now refuses to sign an oceans charter to save the seas.

But that's just the tip of the iceberg. President Trump went into the G-7 summit slapping trade tariffs on steel and aluminum imports into the U.S from Canada, the European Union countries and Mexico.

The other members of the U.S. delegation tried to unsuccessfully remind Trump that they have been allies for decades and this move is simply a violation of the spirit of comradeship.

Trump and his aides felt the G-7 was a stab in the back and accused Canadian Prime Minister Justin Trudeau of being the mastermind behind this so much so that Trump's senior trade adviser Peter Navarro and top economic adviser Larry Kudlow called Trudeau "amateurish," "rogue," "sophomoric" and accused him of "double-cross" and "betrayal" in interviews with CNN and Fox News, while Navarro went one step ahead and declared, "There's a special place in hell for any foreign leader that engages in bad-faith diplomacy with President Donald J. Trump and then tries to stab him in the back on the way out the door."

The G-7 has clearly turned into a fiasco that does not bode well for the unity and solidarity of the Western world. President Vladimir Putin and the Chinese must well be watching all these developments with a grin.

Since World War II the U.S. has become the undisputed leader of the Western world but that has come with a price. The Americans have shouldered the defense needs of Germany and Japan and have thus allowed their economies to prosper. In time the U.S. has become an export heaven for the whole world, and the U.S. economy has been severely hit. Now Trump is trying to correct this and sort out the mess. Yet he is not doing this with a touch of sophistication. He is acting and sounding like a bully who is alienating the international community.

Especially his diplomatic moves are questionable and highly dangerous. The decision to shift the U.S. Embassy from Tel Aviv to Jerusalem and declare Jerusalem the capital of Israel was so needless and explosive. Now we are witnessing the end results.

All this is happening in a fast changing world where every country and especially the U.S. need friends. However, the policies of Trump simply do not increase the numbers of the friends of Washington; on the contrary, old and trusted friends are being alienated and are turning against the U.S.