Assad acts as if he is in total control in Syria 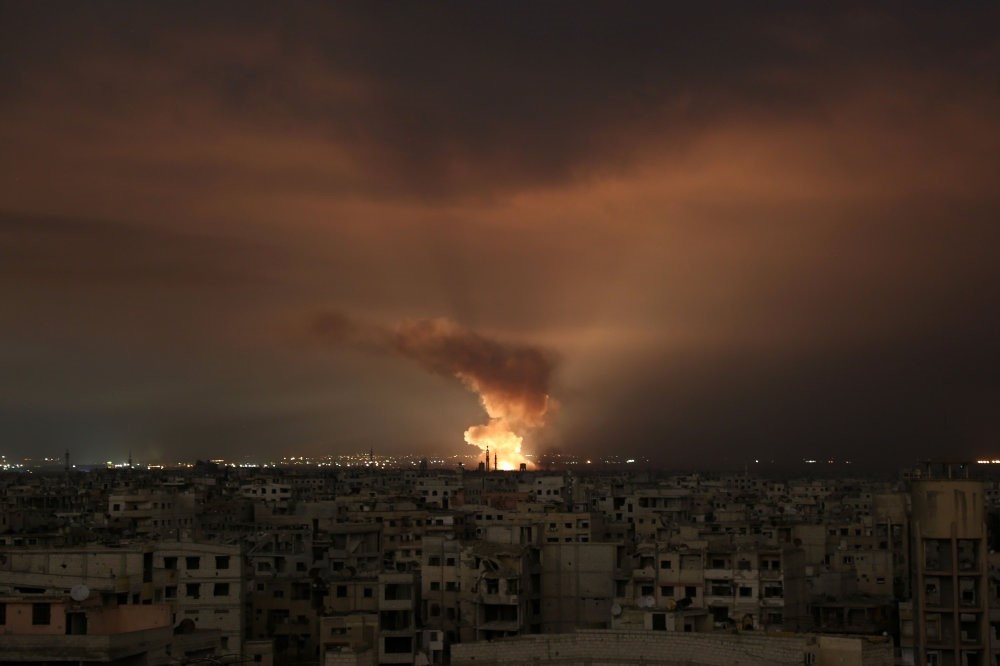 Smoke billows following an Assad regime air strike on the Eastern Ghouta region on the outskirts of the capital Damascus, Feb. 23.
by İlnur Çevik Aug 10, 2018 12:00 am

The Assad regime has survived thanks firstly to the Iranian military land forces and then to Russian air support. Assad has not only survived, but he has started an aggressive policy to reclaim all the lands he used to control before the seven-year old civil war.

In general, the Assad regime is in control of most of the western parts of the country and is now pushing into the Idlib area. The regime forces are also trying to edge their way into the oil-rich areas in eastern Syria, while they have had some setbacks in the southern borders as Israel has started to claim large chunks of the areas near the Golan Heights under the pretense of building a 40-kilometer security zone.

Assad feels in general that he has gained the upper hand against the opposition Sunni majority forces, which are in disarray.

The opposition groups have started to unite under various groupings and the Free Syrian Army (FSA) that operates in northern Syria with Turkey and in the south with Israel is one of them.

The Russians and the Iranians continue to back Assad's regime and thus bolster his strength and bargaining power.

Turkey, like Israel, feels its border security is at high risk thanks to the developments in northern and southern Syria.

In the south, Iranian forces and Hezbollah units had started to edge their way closer to the Israeli border and thus pose a direct threat to the Jewish state. Israel threatened direct military action and the Americans backed them; thus Russia stepped in and mediated the withdrawal of the Iranian forces away from the border areas, which was a setback for Assad.

In the north with direct American help, the terrorist organization PKK used the Democratic Union Party (PYD) and the People's Protection Units (YPG) to kick Daesh out of the region and thus grab large chunks of the land formerly controlled by Assad. The PKK encroaching on the border areas of Turkey became a direct threat to Turkish security and the U.S. simply ignored repeated warnings by Ankara that this was an unacceptable situation.

Turkey launched two military operations, Operation Euphrates Shield and Operation Olive Branch, to kick Daesh out of the al-Bab region and the PKK out of Afrin and thus control 4,000-square-kilometers of land in the north of Syria. The PKK and its affiliates remain in control of the border areas east of the Euphrates River as well as all the way down to Raqqa and the neighboring oilfields to the south.

Now, Assad wants those lands back and is negotiating with the PKK. Assad is also maneuvering to reclaim the lands currently controlled by Turkey. He can do business with the PKK, which is a former ally. Yet, when it comes to Turkey he will face a stone wall.

Assad may think he can take back large chunks of the country, but can he rule them? Can he rebuild Syria when no one will provide funds to the country for reconstruction while Assad remains in power?