US forcing Turkey to look for alternative arms 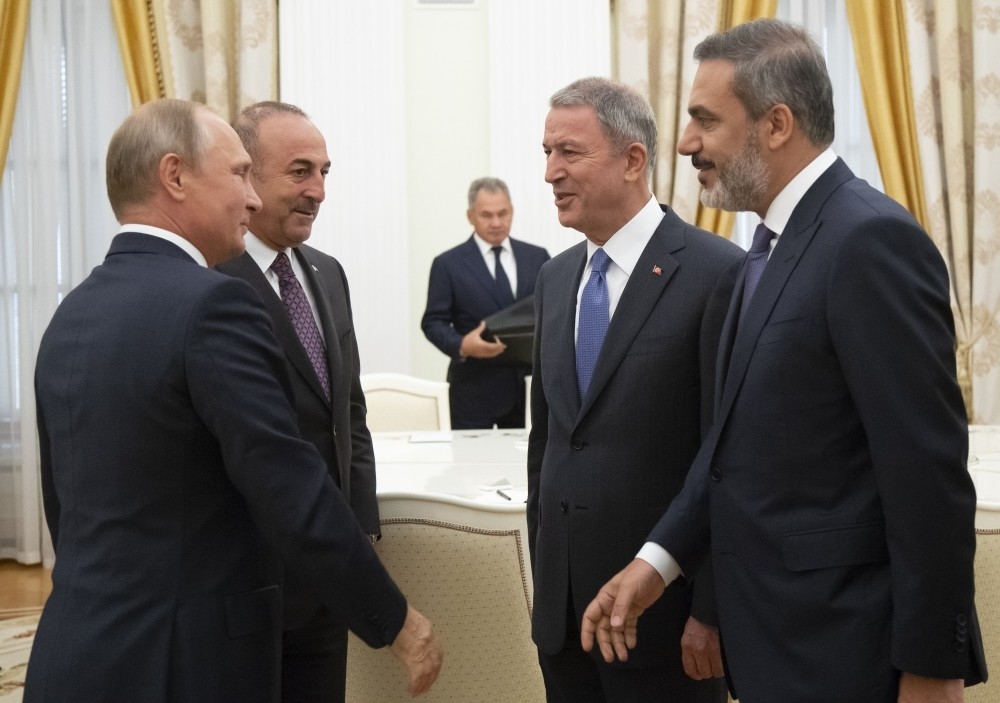 (From left to right) Russian President Vladimir Putin, Foreign Minister Mevlu00fct u00c7avuu015fou011flu, Defense Minister Hulusi Akar and intelligence chief Hakan Fidan talk to each other during their meeting in the Kremlin, Moscow, Aug. 24.
by İlnur Çevik Aug 29, 2018 12:00 am

Turkey's S-400 decision does not signal of the end of its alliance with the U.S. but sends a clear message to the Trump government, which uses the F-35 fighter jets as a bargaining chip against Ankara

Turkey had sought to purchase an aerial defense system from the United States and was rejected. Now the same ally is turning to Turkey and threatening to impose an arms embargo if Ankara purchases one from Russia. Isn't this hypocritical?

NATO allies Germany, the Netherlands and the U.S. sent their American made Patriot missiles to Turkey when the Syrian civil war broke out fearing that our country could be the target of Assad's missiles.

Yet isn't it strange that the same allies withdrew their missiles from Turkey's southeastern borders when the PKK triggered a mini uprising in our southeastern cities and townships between 2014 and 2015?

So our allies have refused to sell us an air defense system and they have also rejected deploying their own missiles on our territory to defend us. So what Foreign Minister Mevlüt Çavuşoğlu stated on Tuesday at a press conference in Lithuania is unfortunately the ugly truth. Our foreign minister said the Americans have rejected selling an air defense system to Turkey and added, "We have to protect our air space. This is a must for us. They should understand this. Can the U.S. give us a guarantee that they will sell us Patriots?" he asked.He was responding to a question about whether news of a U.S. Congress delegation urging Ankara to give up the purchase of S-400 missiles from Russia in order to receive F-35 fighter jets was true.

The delegation headed by U.S. Congressman Michael Turner, a member of the NATO Parliamentary Assembly, held meetings in Ankara with Foreign Ministry and Defense Ministry officials on Monday regarding the purchase of S-400 systems and the delivery of F-35 fighter jets. The Americans are threatening to block the delivery of the F-35 jets to Turkey if Ankara does not give up the idea of buying the Russian air defense system. The U.S. Congress has passed a law to halt the delivery of the fighters to Turkey for 90 days pending a Pentagon report on the impact of Turkey's purchase of the S-400 system on the F-35 fighter jets.Yet it seems the Americans do not understand that Turkey is not a simple buyer of the jets but an official partner in the F-35 project along with eight other countries including the U.S. So we are entitled to get these fighters as much as the U.S. is. We have a very strong legal case.

It is strange that Greece and many former Warsaw Pact members who are now in NATO have the Russian made S-300 air defense system and yet no one raises any objections at the White House or on Capitol Hill.

The Americans have to understand that Turkey is not seeking an alternative to its ally, the U.S., or any other ally or even NATO. Yet it is following a policy of keeping its international relations in a balance – thus it forges close ties with Russia and many other counties.

If the U.S. had agreed to sell us the Patriots and its technology then we would never ever had the S-400 issue and we would not be seeking any alternatives. We have been pushed to take this course of action because of the negative attitude of the Congress and the American administration. We should set the record straight.