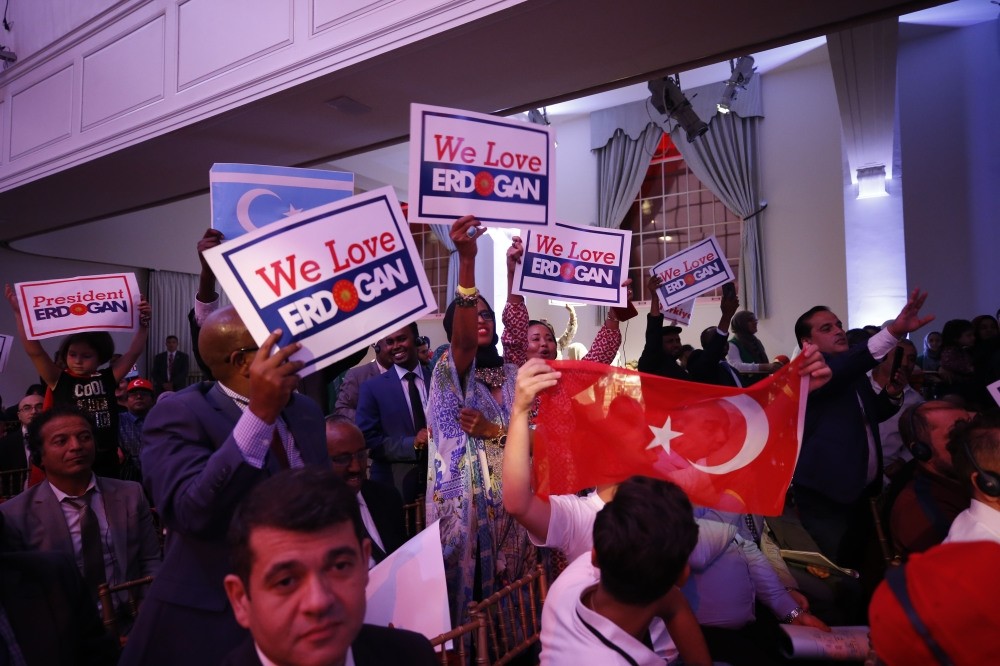 People wave flags and placards as they welcome President Erdou011fan arriving to make a speech at a meeting of the Turkish-American Steering Committee (TASC) in New York. Erdou011fan arrived in the city yesterday to participate in the U.N. General Assembly.
by İlnur Çevik Sep 25, 2018 12:00 am

President Recep Tayyip Erdoğan is back in New York to attend the annual United Nations General Assembly sessions and address the international community on the need for urgent steps to restore a just global system.

Turkey has emerged in recent years as the champion of the oppressed masses through its intervention in various parts of Africa, in the way it rallied to help millions of Muslims in Myanmar and how it gave refuge to 3.5 million Syrians that fled to our lands to get away from Bashar Assad's cruelty.

Turkey has not only provided relief for the people of Somalia and Sudan but has also extended a helping hand to rebuild their infrastructures and boost their economic capabilities. This effort is now spreading all over the African continent.

Regarding the Rohingya Muslims of Myanmar, Turkey sent relief teams and money to Bangladesh where these unfortunate people are being given shelter. The presidential family has visited several times, and Turkey continues to provide relief through its official agencies and nongovernmental organizations.

Regarding the Syrian refugees in Turkey, Ankara has been taking care of 3.5 million of them for the past seven years, spending at least $35 billion of Turkish tax payers' money. The Turkish people have supported this over the years with maturity and without the racist and ugly anti-immigrant movements witnessed in Europe.

Turkey has also prevented the flow of these refugees to European countries, thus doing them a favor.

All of these factors have made Turkey the leading country in the world that is extending a sincere and valuable helping hand to the oppressed, fallen and needy. But that is not all.

Turkey also emerged as a peacemaker after it convinced Russia to halt military action against the Idlib region in northern Syria and probably saved the lives of 3.5 million people.

Turkey managed to forge the Astana peace process in Syria along with Russia and Iran and has been the driving power to bring hope to the people of Syria.

The Assad regime kills and ruins lives, while Turkey gives life and hope to millions of Syrians. President Recep Tayyip Erdoğan convinced his Russian counterpart Vladimir Putin that it was better to give hope to the people of Idlib and declare a demilitarized zone than help Assad slaughter Syrians in the region.

The people of Idlib are grateful to Erdoğan for saving them at a critical moment.

So added to its role as champion of the oppressed and the fallen, Turkey is now also a peacemaker. So the motto "Peace at Home, Peace in the World" set by Mustafa Kemal Atatürk lives on as Turkey sets the scene to promote peace in the region and in the world.

These are the ideals that Turkey cherishes and promotes, the very ideals that make the United Nations what it should be.