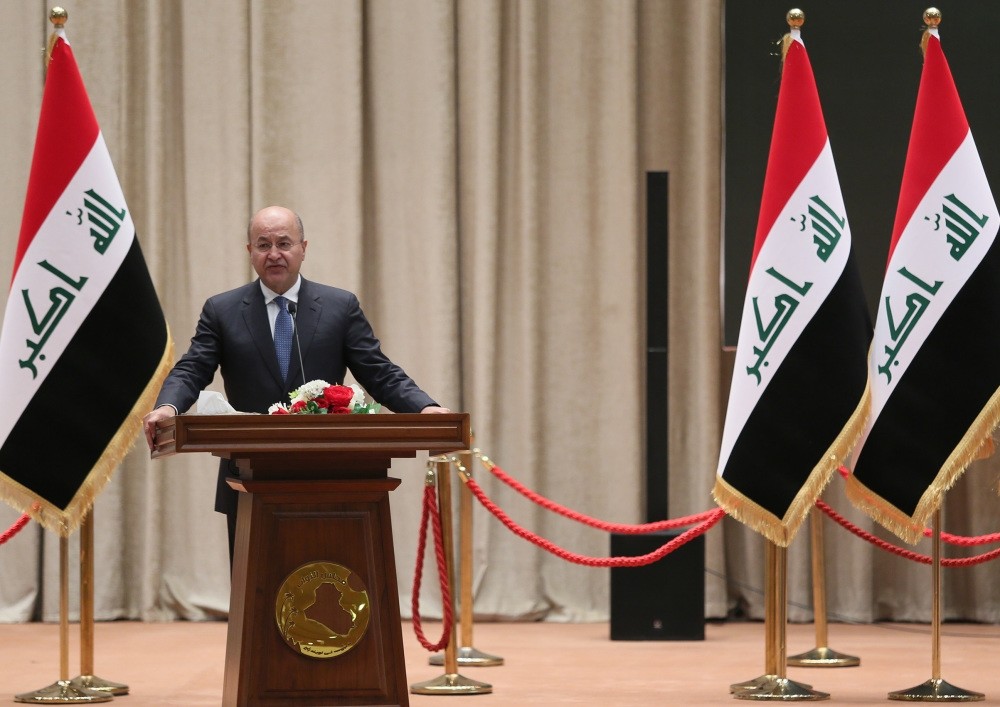 The newly elected Iraqi President Barham Salih delivers a speech at the parliament in Baghdad, Oct. 2.
by İlnur Çevik
Oct 05, 2018 12:00 am

If you want an honest politician who will act with common sense and sophistication and will strive to enhance his country then Dr. Barham Salih is the best choice for the post of president of Iraq.

He is a Kurd and once the right-hand man of the late Mam Jalal (Talabani) who did wonderful work to help Suleimaniyah prosper and meet the challenges of the post-Saddam era. He saw the future of the Kurdish region of Suleimaniyah in the education of the youth and thus encouraged university education by building student dormitories that would host the students during their education. He also realized that he had to attract businessmen and foreigners to Suleimaniyah and thus had an airport built – with the strong backing of Mam Jalal – despite the objections of the Erbil administration run by the Barzanis and the Americans who were in charge of Baghdad.

He later became the deputy prime minister of Iraq, which showed he was a man of statesmanlike qualities.

Dr. Barham had one fault. He did not like corruption, backdoor dealings and irregularities. He had the Suleimaniyah Airport built for only $43 million, while the facility in fact was worth $80 million. Some British and American companies offered to build the airport for $100 million.

This quality did not earn him friends. He did not like the way the political atmosphere in the Kurdish Regional Government (KRG) area was developing so he established his own party but had to fight an uphill battle. But when the need arose Mam Jalal's beloved Patriotic Union of Kurdistan (PUK) called him for duty and Dr. Barham obliged. He became the PUK's presidential candidate and won the elections in the Iraqi Parliament thrashing Masoud Barzani's candidate Dr. Fuad Hussein with more than 100 votes. This caused uproar in the Barzani camp and deepened the divide between the Kurdistan Democratic Party (KDP) of Masoud Barzani and PUK.

The PUK and other political groups from Suleimaniyah had blocked the election of Masoud Barzani as the head of the KRG, which created a blood feud. The long-standing agreement between Talabani and Barzani was that the head of the KRG region would be from the KDP and the post of president of Iraq would go to PUK. Now with the PUK coup in Baghdad, the Barzanis are further humiliated and are hopping mad.

This means the old divide where the KDP runs Duhok and the Erbil provinces, while PUK and allies run Suleimaniyah will return. In fact, this was also the case even when there was supposed to be a united KRG administration. The Kurds of Suleimaniyah may even apply to Baghdad to demand that the Iraqi government pay them their share of the monthly funds earmarked for the KRG region directly and not through Erbil.

Dr. Barham has to cope with this intricate situation where he has to find ways of mending fences between Suleimaniyah and Erbil, which is hard and will take time. If Dr. Barham was left alone with Nechirvan Barzani the task would have been much easier but with the hawks in Erbil he will have difficulties.

Dr. Barham also has to cope with the adverse effects of the ill-fated independence referendum of September 2017 ordered by Barzani… It is clear that one of the reasons why the Shiite Arab majority in the Iraqi Parliament voted against Barzani's presidential candidate on Oct. 2 was an act of revenge for the independence referendum.

Dr. Barham has the qualities of Mam Jalal to cope with the intricate political game in Baghdad and has the ability to get the Sunni Arabs on board, while appeasing the Arab Shiites. Since Mam Jalal's departure from Baghdad after a bout of illness, Baghdad politics has been left without the golden touch of Mam Jalal, who mediated between the antagonistic sides and came up with solutions. Dr. Barham has those qualities.

Dr. Barham has always appreciated the importance of Turkey and has cherished the friendship of Ankara. Now we have a good ally in Baghdad just like Mam Jalal.