Brunson was just a small thorn in Turkey-US relations 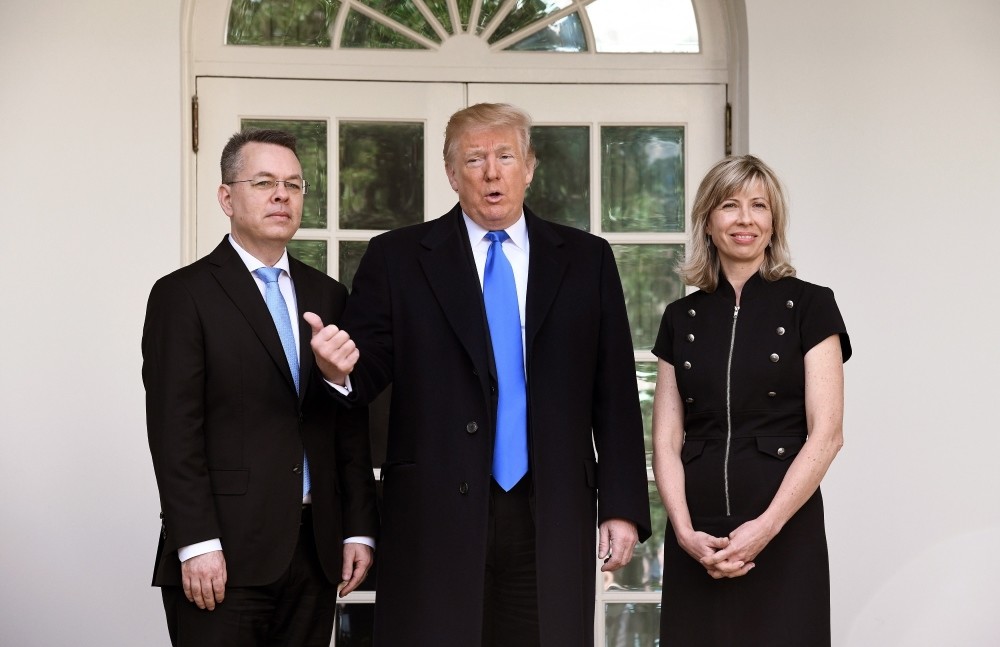 Following his release by a Turkish court, pastor Andrew Brunson (L), was greeted at the White House with his wife Norine Brunson (R), upon the invitation of U.S. President Donald Trump, Oct. 13.
by İlnur Çevik Oct 16, 2018 12:00 am

So a high criminal court in the Aegean coastal capital of İzmir sentenced pastor Andrew Craig Brunson; then released him and effectively sent him off to the United States.

So justice was served, Brunson received a penalty for his links with a terrorist organization and as he had already served time in prison during his court case, he was set free and was able to fly home to a warm welcome at the White House.

Thus a thorn, but a small one, in Turkish-American relations was taken out. Of course the fact that U.S. President Donald Trump has blown the issue out of proportion for propaganda purposes for the midterm elections due in November has only created noise, which has polluted bilateral relations.

Trump went out of his way to punish Turkey with sanctions and tried to hurt the economy by helping to further weaken the Turkish lira against the dollar.

At the end of the day common sense prevailed – the Turkish court punished Brunson and set him free.

So can we look forward to enhanced ties between Ankara and Washington now that the Brunson thorn has been taken out?

Trump says the fact that the issue has been resolved has created "great appreciation on behalf of the United States, which will lead to good, perhaps great relations between the U.S. and Turkey."

In view of the many larger thorns that still hurt Turkish-American ties is this statement realistic? It is a statement in the right direction but much effort is needed to move toward normalized ties between Ankara and Washington.

The first thorn is the fact that the U.S. is hanging on to Fetullah Gülen, who masterminded the July 15, 2016 coup attempt. The U.S. is refusing to extradite him to Turkey. Other than that, the Gülen gang is still very active in the U.S. and there is no official attempt to curb their activities. Also Gülen charter schools are receiving about $800 million annually from the U.S. government which is used to finance their clandestine activities against Turkey. If this isn't a major thorn in our relations with the U.S., then what is?

The second major thorn is the fact that the U.S. has actively supported the Democratic Union Party (PYD) in northern Syria and its armed wing the People's Protection Units (YPG) which are both offshoots of the PKK terrorist organization that has waged a secessionist terrorist war against Turkey for the past 30 years. The fact that the U.S. regards the PKK as a terrorist organization makes the PYD and YPG relationship with Washington even more awkward.

Yet, the Americans have poured arms and all kinds of support for the YPG and PYD, and have helped them occupy one-fourth of Syria, including the oil and gas fields. Now they are moving to declare an autonomous government with the blessing of Washington. If this isn't a major thorn in our relations with the U.S., then what is?

We are not even mentioning the fact that the YPG and PYD were supposed to have withdrawn from Syria's Arab-majority city of Manbij according to an agreement between Ankara and Washington, but they are still hanging onto the city and actually building trenches and hedges around the settlements in an act of defiance.

Besides all this, Turkey's purchase of the Russian S-400 missile defense system, the fact that Russia is building Turkey's first nuclear power plant and American pressure on Turkey to adhere to the U.S. sanctions against neighboring Iran, are just some of the thorns that are much more important than the Brunson case.

Under these circumstances, Trump and his team really have to exert a lot of effort to match Turkey's goodwill to solve such issues and remove the thorns in our relations.