US bogged down in the PKK mess in Syria 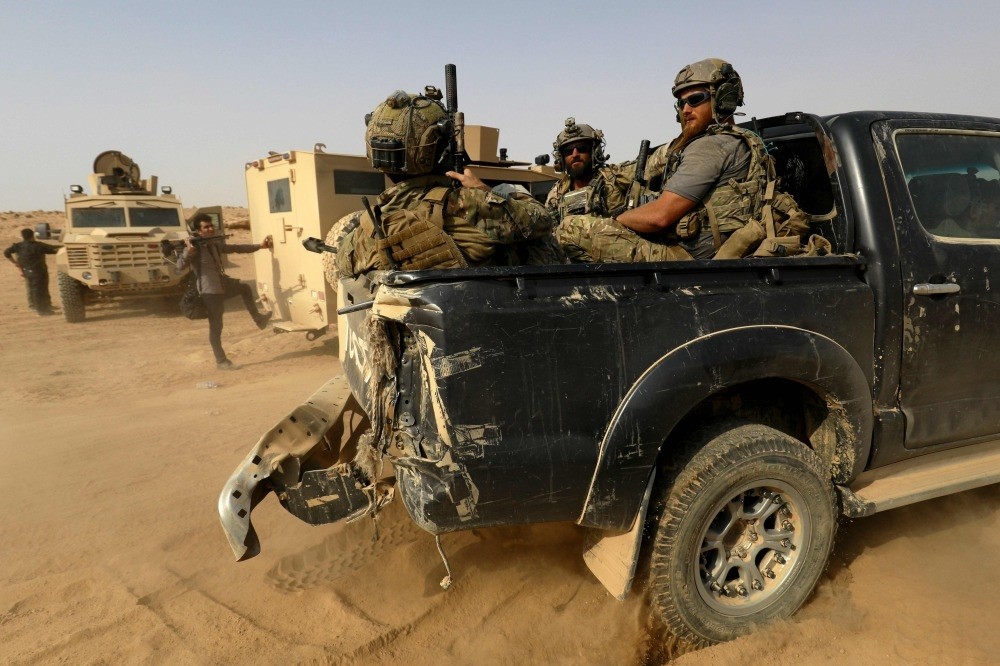 The PKK's Syrian enclaves, backed by the U.S. administration, keep its presence active in northern Syria, posing a threat to Turkish national sovereignty and security

The United States is trying to maintain its presence in Syria through the PKK terrorist organization yet this is causing serious complications for Washington as it fails to address an array of contradictions and shortcomings.

The U.S. used the Democratic Union Party (PYD) and its military wing the People's Protection Units (YPG) to slip into northern Syria and establish a military presence there. Yet as the PYD and YPG are the extensions of the PKK terrorist organization in Syria, the U.S. could not explain why it still officially lists the PKK as a terrorist organization, and supports the PYD and YPG, which is controlled by the PKK leadership holed up in the northern Iraqi mountains of Qandil.

The Americans claimed they will use the YPG and PYD militants to fight against Daesh terrorists and push them out of northern Syria. So they provided massive military assistance to the PYD and YPG militants, trained them and provided logistical support. The PYD and YPG grabbed the lands of the Syrian Arabs and started creating their own "zone" with the help of the Americans.

When the Americans realized the YPG and PYD were nothing but the PKK they decided to call these militants the Syrian Democratic Forces (SDF) sprinkling some Arab fighters among them to sugarcoat the terrorists who were actually the PKK.

The so-called fight against Daesh was in fact only on paper. When the PKK-affiliated militants took the Syrian Arab city of Raqqa they gave safe passage to the Daesh terrorists and even transported them out of the war zone with the blessing of the Americans. The U.S. has not been able to explain why it allowed this atrocity.

Now for the past week the same Daesh terrorists are taking over chunks of land back from the YPG and PYD in the southern parts of the Syrian enclave. So what happened to the heavy arms and massive military support the U.S. provided to the PKK-linked militants if they cannot even hold on to the lands they took over? Or are the Americans staging this show to create the impression that "Daesh is still a menace" and their presence is needed in Syria to beat them? So many contradictions.

Then of course there is the fact that upon Turkish demands the Americans agreed that the PYD and YPG forces would vacate the Syrian Arab city of Manbij and withdraw to the east of the Euphrates River, and yet they have not, and are actually digging ditches and trenches to consolidate their defenses in the city. Isn't there a contradiction here?

It is clear that Turkey is losing patience as the YPG and PYD drag their feet on withdrawing from Manbij while Turkey says even their presence east of the Euphrates is unacceptable. That is why Turkey has started shelling YPG positions near Kobani just south of the Turkish border.

The Americans try to deny PKK links with the PYD and YPG and yet they turn a blind eye toward the PKK terrorists to be commissioned as SDF commanders. A PKK terrorist identified as Azad Simi, whose code name is Çiya Kobani, who is wanted by Turkish officials for his part in massive terrorist attacks in Turkey that claimed a hundred lives, has been appointed by the Americans as the head of YPG operations against Daesh in Syria.

Due to his terrorist activities, he is on the Turkish Interior Ministry's most wanted list. However, despite his crimes, Simi has managed to become the second-most-senior terrorist within the YPG, by becoming the head of the hybrid operations of the terrorist organizations against another terrorist organization, Daesh, in the Deir-ez Zor province of Syria.

This is simply a scandal. The Americans need to revise their policy regarding northern Syria and start cooperating in earnest with Turkey.