Panic and anxiety in the days of Ebola crisis 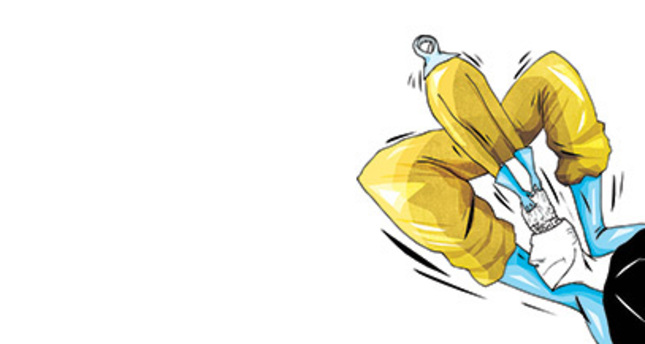 by Kılıç Buğra Kanat
Dec 20, 2014 12:00 am
A virus that in recent months has become an epidemic, particularly in West Africa, reminded the world once more of the disaster scene that it has only seen in stories. In addition to the panic created by news reports on the crisis, the Ebola epidemic revealed even more clearly what such infectious diseases mean for international security. Countries and militaries that focused on security centered on the arms and defense industry saw once again in a brief period of time how unprepared they were against such a threat. Similar to previous avian flu and swine flu epidemics, the atmosphere was dominated more by gossip and commotion rather than information and panic and anxiety instead of caution. The atmosphere during this period and the debates and arguments over the virus contained elements no different to those one would see in Hollywood movies. The first incident of this virus in the U.S., and then news that more than one nurse in the patient's quarantine cell had been infected, caused great waves of panic in large American cities with help from social media. While the Ebola outbreak and the treatment process of patients led to the feeling of common fate among people around the world regardless of their religion, race or ethnicity, it was also quite enlightening in terms of revealing large contrasts, discrepancies and inequality between the world's societies.

We are quite familiar with epidemic diseases and the chaos and struggle that follow from movies, novels and history books. With diseases such as the plague, which spread in the Middle Ages, and the 18th and 19th centuries being a major period of research for historians, the epidemics in more modern periods created an important area of interest for both fiction writers and scriptwriters. Novelists and writers who base their stories around apocalyptic and nightmarish themes, have penned hundreds of works on how epidemics can harm human life, our civilization, politics and social order. The stories concentrate on the spread of a disease, the wave of fear created by the outbreak, the escape from an initially unknown and invisible enemy and heroes who try to crack the code behind the disease and fight it. Very much like Albert Camus's "The Plague," while fighting against the disease and social anarchy, political uncertainty and security vulnerabilities caused by the panic, these heroes find themselves amid new questions regarding life.

As epidemics and infectious diseases of more recent times become a part of horror and thriller movies, visual effects bring them slightly closer to an epidemic environment. In addition to this, the information provided by modern journalism and our access to news on epidemics in different regions of the world through television has made the boundaries between reality and fiction a little more transparent. When themes of a nuclear apocalypse, the most used apocalyptic tool in Cold War movies, lost their fear factor after the end of the Cold War, directors and fiction writers were led to seek more "alternative disasters" to scare their audiences. In some of these disasters, climate change takes the world to an ice age like in "The Day After Tomorrow," and in some the world is occupied by aliens like in "Independence Day." At a time when such alternative disaster themes were popular, movies based on infectious diseases and epidemics appeared as a new genre.

With the combination of increased globalization, modern journalism and visual effects, it did not take long for epidemics and infectious diseases to become a major part of horror movies and thrillers. The relatively low-budget movie "Outbreak," made in the mid-1990s, owes much of its success in the box office to the Zaire-based Ebola outbreak during the time it hit theaters. Epidemic movies, which were later overshadowed by those using global warming, emerged in the 2000s. The particularly effective SARS crisis caused great harm to social psychology during this period. For the young generation of the developed world who until then had only heard of infectious diseases in novels and stories, the situation had suddenly changed. The epidemic, spreading as fast as globalization, had caught the world off guard. The confusion on how to protect oneself against the virus during its discovery and the spread of the disease was probably the greatest cause of this state of concern. Animals were destroyed and people's social lives and business affairs were deeply affected. This also led to new speculation regarding the geographical coordinates of the origin of the epidemic. Until then, different regions and sources had been portrayed in fictions and movies as the source of the epidemics. In some of these books and movies, the source of the virus or bacteria were certain animals in Africa like in "Outbreak," in some it was aliens as in Michael Crichton's "The Andromeda Strain," while in others like Stephen King's "The Stand," it was American biological war laboratories. Following the SARS outbreak, the focus turned to China and Southeast Asia, at least in the eyes of the public and popular culture. Films and books that came after SARS were also affected by this. The source of a meningitis-like mysterious disease in the movie "Contagion" was Hong Kong and the first patient was a businesswoman who had returned to the U.S. from a business trip to China. The disease not only caused a halt in trade and transport, but cities were quarantined while those trying to escape the disease and be the first to reach a newly found vaccine caused chaos and disorder.

All the previously written and screened epidemic fantasies actually give some clues on what may happen in the event of a possible epidemic outbreak. The debates and disaster scenarios on Ebola in the last few months have shown the world that despite all the fear, there really is not much to do in cases of epidemic outbreaks. Regardless of how effectively it is contained, diagnosis of Ebola in a couple patients in Western countries caused a low-intensity panic. Informational campaigns did not do much to remove the concern and panic triggered by social media. The conspiracy theories and hearsays on the disease were no help either.

All this has shown that in a world where boundaries are so transparent and economic and social lives are so closely connected we have many reasons to be pessimistic regarding how epidemic outbreaks can be prevented. Besides, we still have no answer to what kind of leadership is necessary to fight such a calamity in the current state of the international. Seeing health officers in uniforms reminiscent of those in cheap sci-fi movies as they carry Ebola-infected patients in a different region caused soaring concern around the world. The possibilities became more prominent than the details. The outbreak of Ebola in such an environment led to the review of many different scenarios. Despite the great progress in the field of medicine, communication capacity and ability to keep the disease under control, it is seen that these developments never removed the possible disaster scenes from people's minds. Everybody was frightened, everybody became alarmed and everybody was unprepared.