Kenan Evren and coups in Turkey 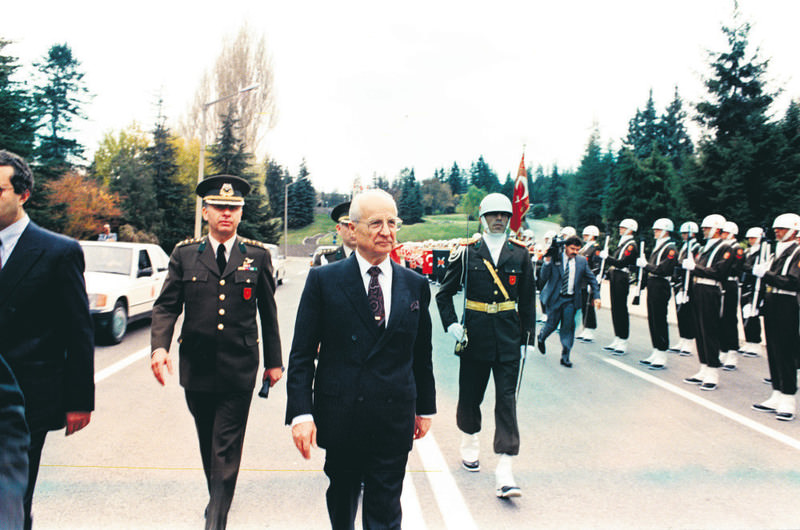 The continuous military interventions over the last 60 years of Turkish democracy have left a series of different victims of coups. The destructive and bloody aftermath of coups anywhere is always remembered as the darkest days of the countries' histories just as 1980 was one of the darkest years for Turkey

Almost two years ago, while everybody was expecting the blossoming of democratic regimes in the Middle East, a military intervention took place in Egypt that overthrew the democratically elected government of President Mohammed Morsi. The coup and aftermath generated a huge reaction from the Turkish public and politicians. Although some at that period considered this as a show of solidarity by the Turkish government with the Muslim Brotherhood in Egypt, what triggered the Turkish reaction to a military coup in a country has more to do with the trauma, scars and painful memories of previous coups in Turkey. The scenario was very familiar for the Turkish public and the path was well-known. Kenan Evren was one of the architects of this traumatic experience and memory.

It is very difficult for people in the countries with long and uninterrupted democratic experiences to understand the impact of military coups on its victims. For many in the West, military coups are usually in the fiction of Latin American novelists and filmmakers, in the movies about the Middle Eastern dictators or in "The Adventures of Tintin." Because of that it is sometimes difficult to imagine what a military coup can do to a nation, its destructive effects on social relationships and to the institutions of its political system. These impacts are almost universal for the victims of coups around the world. The victims of coups in Latin America face the same form of persecutions as the victims of juntas in Africa. The methods, techniques and strategies of coup makers are similar in the Middle East and in Southeast Asia. Even the planning and execution of the coups demonstrate similar patterns around the world. Coups stops the flow of time, and for all the victims around the world, a coup changes he lives, having to live long years with the trauma and very deep scars in their imaginations.

Turkish society has suffered from multiple, different military coups. However, the 1980 coup has a more noticeable place in the history of Turkish democracy and in the collective memory of society. It was not that society was not familiar with military intervention in politics. In 1960, a military coup interrupted the democratic process in Turkey for the first time. Then Prime Minister Adnan Menderes, together with Hasan Polatkan and Fatin Rüştü Zorlu, were executed after a summary trial administered by the junta with irrelevant charges. Later, in 1971, the military once more intervened in the politics in Turkey with a memorandum. However, in terms of its length, impact and legacy, the 1980 military coup led by General Kenan Evren, who died yesterday at the age of 98, had a more destructive effect than any other military intervention.

The coup not only eradicated the whole political establishment in Turkey, but also brought a largely repressive political system that limits basic freedoms and liberties, including freedom of expression, the press and organization, in Turkey. The unlawful detentions, arrests and executions have become a symbol of the years that a military junta ruled the country with an iron fist. During this period, political parties were prohibited and a large group of former politicians were banned from running for public office. While politicians had failed to achieve effective civilian control of the military since 1960 coup, the military excelled in overthrowing the government, and with the 1980s, the junta tried to prove the longevity of military predominance. The coup makers made sure that they would be immune and proofed their coup as much as possible to this effect. They also established institutions that would guarantee long-term survival of the active military control of civilian and political life.

Following the coup, Turkey stayed under the shadow of Evren, then president, and his junta for long years. The 1980s, despite very significant developments in the economy, technology and infrastructure due to then Prime Minister Turgut Özal's reforms, could not achieve the same level of development in terms of democratization and political reforms. As president, Evren increased the constitutional power of the presidency in order to be able to veto anything that would endanger the pillars of the tutelary system.

Evren remained president until 1989, but the institutions that he built, such as the military-dominated National Security Council, remained the bastion of power for the military. The increasing civil sector in Turkey in the 1990s tried to change the military dominance of Turkish politics, however some generals continued to exert immense amount of pressure on politics through different channels.

Although Evren was responsible for the most comprehensive military intervention in politics, after him, coup makers have become more innovative. In 1997, the military intervened in politics with a "postmodern" coup. It was postmodern because the military mobilized the masses and used media in order to generate negative publicity about the democratically elected government through its propaganda mechanisms. The government was forced to resign through this double pressure and the judiciary, which was for a long time the most significant ally of the military, completed the military intervention by shutting down the Welfare Party. The organizers of this coup also have links with Evren. The most famous general, who for many was the most powerful in the military and who became the public face of the coup, Çevik Bir, served as the chief of staff for Evren's office when Evren was preparing the coup. Later, after Evren became the president, Bir also moved with him to the Çankaya Mansion and became Evren's first "aide-de-camp."

Just like Evren and his junta, which received a harsh response from the public in the 1983 elections, Bir and his postmodern coup also received a harsh response from the people in the November 2002 elections. However, some within the ranks of the military continued to hope for a military intervention that would gain the support of the majority of the public. These hopes revived in 2007 when some ultra-secular and ultra-nationalist groups started to organize mass rallies in order to intervene to the presidential elections through street politics other than electoral democracy. The banners and placards of some demonstrators calling the military to duty showed the democratic credentials of these demonstrations. Some generals in the military were encouraged by these street demonstrations and issued another memorandum in April 2007 that led to early elections.

What Evren, and later his pals, did not understand was each and every military intervention resulted in the public's reaction to the military. Like previous military interventions, the 2007 memorandum led to an electoral victory of for the Justice and Development Party (AK Party) government. After this period, through different reform packages and constitutional amendments, the government tried to achieve active civilian control of the military.

These continuous military interventions over the last 60 years of Turkish democracy have left a series of different victims of coups. The juntas, while suppressing basic freedoms and liberties, also broke down the dreams of millions of youth. Some lost their lives, others lost their freedoms and others were deprived of equal opportunity in education, politics and the economy. Each and every coup created different threat perceptions so that society would embrace the tutelary system and consider the military the only savior of stability. Each coup generated "others" to be excluded, persecuted and suppressed. Each coup threw the seeds of different animosities and each coup alienated some other segments of society. Each coup took Turkey several steps back in its democratic standards and each coup created new fault lines.

Evren died yesterday, but in many other countries there are still generals looking for an opportunity to overthrow civilian, elected leaders. Although these junta leaders, such as the ones in Turkey, were frightening and even respected by some during the coup, history does not write very favorable things about them. The coup itself as an unethical form of change of power and its destructive and bloody aftermath is always remembered as the darkest days of countries' histories. 1980 was one of those darkest years for Turkey.