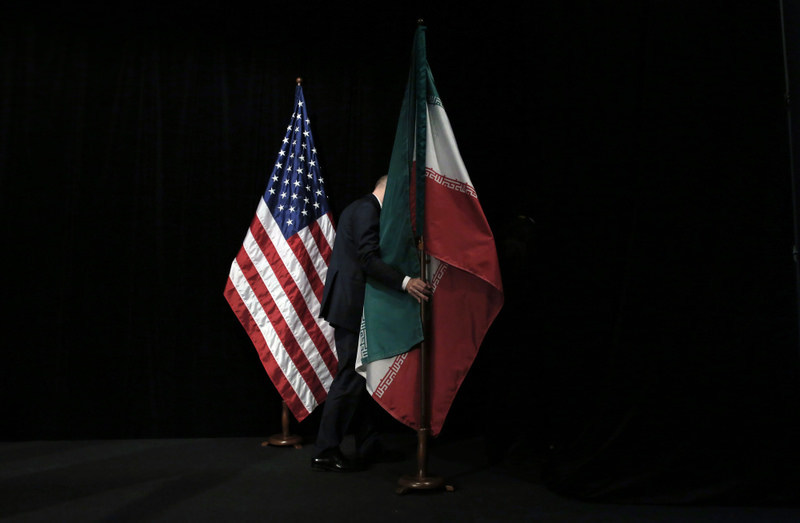 A staff member removes the Iranian flag from the stage after a group picture with foreign ministers and representatives of United States and P5 countries has taken during the Iran nuclear talks at the Vienna International Center in Vienna.
by Kılıç Buğra Kanat Jul 17, 2015 12:00 am

The P5+1 and Iran reached an historic deal on the Iranian nuclear program last Tuesday. Experts in the coming days will discuss the details and technicalities of the agreement. Many, however, have different concerns about the agreement. These concerns and question marks will mark debates on U.S. domestic politics and especially the presidential elections next year. They will also play a significant role in shaping regional politics in the Middle East. Because of this, the policies and messages of the Obama administration towards the region may be more critical after the implementation of the agreement.

On the U.S. side, from the very beginning of the negotiations, the Republicans in Congress expressed their skepticism about a deal with Iran. The framework agreements were not only criticized harshly by Republican lawmakers, but the path to this agreement faced significant interventions by Republicans by various means. The invitation to Israeli Prime Minister Benjamin Netanyahu was one of these interventions. At the same time, 47 Republican Senators made a rare direct intervention in the diplomatic negotiations by signing an open letter to the leaders of Iran. The letter warned Iranian leaders that any long-lasting agreement in the U.S. would need the approval of Congress. In the aftermath of the framework agreement, the Senate passed legislation allowing Congress to review a possible deal with Iran on its nuclear program. Now, almost four months after the framework agreement, the parties reached a deal about the nuclear program and Iran, and the reaction of the Republican members of Congress were no less critical of the agreement. From the first reactions by Republican members of Congress, it is clear that several issues illicite harsh objections. They include the length of the agreement, the issue of arms sanctions on Iran and the issue of inspection regimes, particularly in regards to military research facilities. Of course, many Republicans are already discontented by the fact that the U.S. made various concessions in regards to Iran, especially regarding the status of its nuclear facilities after 10-15 years have passed.

The beginning of the debates and accusations following the nuclear deal demonstrates that these discussions will not only become another dispute between the White House and Congress, but it will also be one of the determining factors in the legacy of Obama's foreign policy. In addition, during the presidential election next year, the Iranian deal will be the major issue between Republican and Democratic candidates. The Democratic candidate will face challenging questions and will have a hard time to position himself/herself regarding the agreement. The agreement between Iran and the P5+1 will also have serious ramifications for international relations in the Middle East. Even before the framework agreement, traditional U.S. allies in the region, including Israel and Gulf countries, expressed their criticism and skepticism about such a development. Previously leaked Wikileaks documents demonstrated that the Gulf countries were pushing the U.S. to take a more hawkish position on Iran. Israel, on the other hand, was doing so very openly. Prime Minister Netanyahu used each and every summit or meeting to state the danger that Iran poses to the international system. During meetings with U.S. officials, his address to Congress and his statements at the U.N. General Assembly, Netanyahu constantly made this point. The only major actor in the region that has looked favorably on such a deal has been Turkey. The Turkish government previously even attempted to facilitate this deal by signing the Tehran Declaration. Five years ago, this deal was criticized and ignored by Western officials, and some in Western policy circles accused Turkey of shifting its axis and tilting towards Iran, as a result of Turkey's willingness to resolve the nuclear program crisis through peaceful means during a period when some in Washington were discussing war scenarios.

Previously, the framework deal also led to a major uproar from the Israeli government and a heightened degree of skepticism from Gulf countries. Obama's phone call to Netanyahu and his meeting with Gulf leaders after the framework agreement did not change much. After the deal, the Israeli government called it a historic mistake, and the Gulf countries also expressed their skepticism. Now, after implementation of the agreement, there will be some very significant challenges for the U.S. to manage its relations with its allies in the region. There will be many different policies balancing, counterbalancing and hedging between different actors and the U.S. in the politics of the region.

A particular issue will concern Iran's integration into the international system. Although the deal provides an important pathway towards this goal, the real question arises about the relationship of Iran with regional actors in the Middle East. The policies of Iran in the Middle East in recent years have been extremely destructive to the stability of the region as a whole. The country, through its proxies and various military and political instruments, contributed to the emergence of a civil war in Syria and the emergence of the conflict in Yemen. To be recognized as part of the international system, it has to necessitate at least the same degree of responsibility that Iran demonstrated during the nuclear negotiations. Nuclear restraint needs to be followed by restraints in other areas of their foreign policy as well. Otherwise, if the Iranian regime recognizes this as a green light for its ambitious regional agenda, the region will be a fertile ground for conventional conflicts and proxy warfare. If, on the other hand, Iran shows responsibility and restraint not only with the P5+1 but also with its neighbors, with the removal of sanctions, it can find itself in a win-win situation with other regional actors. Following its gestures and concessions to global actors, now would be a good time for Iran to show the same degree of goodwill in conflicts that it has been involved in for years. All of these issues have yet to materialize. In fact, the success of the Obama administration with its deal with Iran will not only be judged by its contribution to non-proliferation but also on its impact on Iranian policies in the Middle East.