The Clock and the US 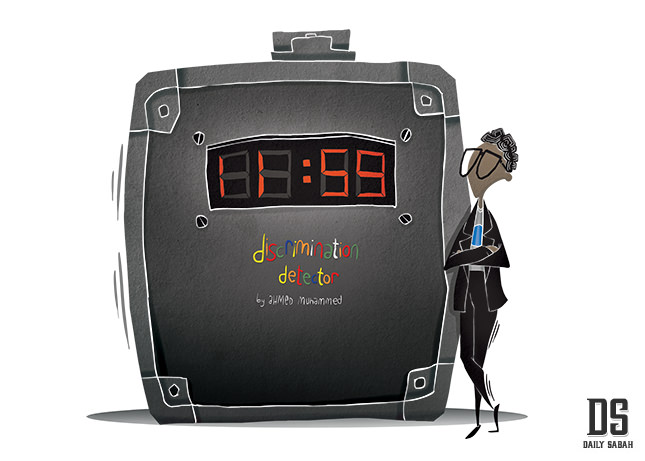 by Kılıç Buğra Kanat Sep 19, 2015 12:00 am
What happened in Texas last week was reminiscent of comedy movies in which some innocent characters are mistaken for terrorists. Previously, especially during the Cold War years, this genre was mostly stories of naive characters mistaken for spies and the adventures of these accidental spies in hostile environments. However, in recent years there has been a transformation in this genre. Among these more recent movies, probably one that is talked about the most is a terrible one: "Harold and Kumar: Escape from Guantanamo Bay." The movie is about the adventures of two young men after they face accusations of being terrorists while they are flying to Amsterdam. A series of events in the plane alarms some of the passengers and creates panic that leads to the arrest of the two men. In one of the oft quoted scenes of the movie, the officers from homeland security prepare to interrogate the two men and see that one of them looks different, the Korean character. Then a conversation starts between him and the officer taking care of the two men.

Officer: What's up with the guy with the weird eyes? He handicapped or something?

-We believe he's of Korean decent

-My God. North Korea and al-Qaida working together. This is bigger than I thought.

Although it sounds very much like an exaggeration of ignorance and stereotyping, the fact that now there is enough material about these misperceptions and mischaracterization to be an object of comedy has something to do with the changing threat perception and social dynamics in the U.S. following the 9/11 attacks. The vulnerability of the most securely protected buildings and institutions in the U.S. during these attacks raised a significant atmosphere of fear among Americans, which in turn generated a significant impact on the social relations and perceptions of Muslims in the country. Fourteen years after these terrible tragedies in New York and Washington, the depth of this trauma is still observable among some segments of society. When over a decade after this incident, during a Donald Trump political rally, the front runner in the Republican presidential primary at this point, someone among the audience said: "We have a problem in this country. It's called Muslims. You know our current president is one. You know he's not even an American." It showed the depth of this trauma and the extent of discriminatory perceptions.

In part what contributed to this discourse on Muslims in the U.S. was the increasing normalization of discriminatory statements about Muslims in the political sphere. In the last few elections we saw presidential candidates arguing that they would officially implement profiling for Muslims and Middle Easterners and those who expressed a plan to ask any Muslim staff member he hires to take a loyalty oath. These debates and irresponsible statements made discriminatory statements more common in the public sphere.

Now to the Ahmed Mohamed case. Yes, it sounded like a comedy script. A 14-year-old boy in Texas was arrested last week for bringing his homemade alarm clock to school to show it to his engineering teacher. When the alarm clock started to make sounds in the classroom another teacher was worried about the device and subsequently the school called the police who escorted Mohamed out of the classroom. They took him to a room and did not allow him to call his parents during the initial interrogation. The primary accusation at this point was that it was a hoax bomb. The school suspended Mohamed for three days following the incident. But this bleak picture of what happened in a very short period of time received reactions from Americans who oppose such forms of discrimination in their country. Within a short period of time photographs of Mohamed, bewildered by what happened and handcuffed, went viral on social media. On different social media outlets the news and reactions about such a meaningless action started to be questioned and criticized. In a very short period of time #Istandwithahmed became a global Twitter trend and Mohamed started to get thousands of messages of support from different parts of the world. Most prominently President Barack Obama tweeted a message about the incident saying: "Cool clock, Ahmed. Want to bring it to the White House? We should inspire more kids like you to like science. It's what makes America great." Hillary Clinton also tweeted: "Assumptions and fear don't keep us safe - they hold us back. Ahmed, stay curious and keep building." The tech giants in the U.S. were also prompt in their reaction to what had happened. Facebook CEO Mike Zuckerberg wrote: "Having the skill and ambition to build something cool should lead to applause, not arrest. The future belongs to people like Ahmed. Ahmed, if you ever want to come by Facebook, I'd love to meet you. Keep building." Google invited him to its tech fair. Together with the public reaction these are good signs of a very strong stand against anti-Muslim discrimination in the country.

REFLECTION OF THE CLOCK IN AMERICAN POLITICS

These positive reactions, however, cannot totally remove the negative opinions, prejudices and stereotypes about Muslims in certain segments of the population. The primary goal of politicians in the U.S. in this very polarized period of American politics should be to prevent this issue from being a rallying ground for domestic political goals. The idea of discrimination is a dangerous boomerang that can find another target after destroying the lives of the target population in a country. It is not an ideology in itself, but a major threat for stability and social harmony. Despite the reports of rising Islamophobia in the U.S., the majority of the public made the right choice to stand with the young boy. However, this show of strength will be more meaningful when there is insistent consistency and commitment to fight any form of discrimination in the country. Mohamed will visit the White House in October and he could even be a student at the Massachusetts Institute of Technology (MIT), his dream university in the future, if the second group of Americans is more adamant in their goals of preventing discrimination in the country. In the future he will talk about this adventure of sorts in order to demonstrate how much America has changed. Otherwise we will continue to see such tragic comedies in our daily lives in the U.S.
Last Update: Sep 19, 2015 10:46 am
RELATED TOPICS