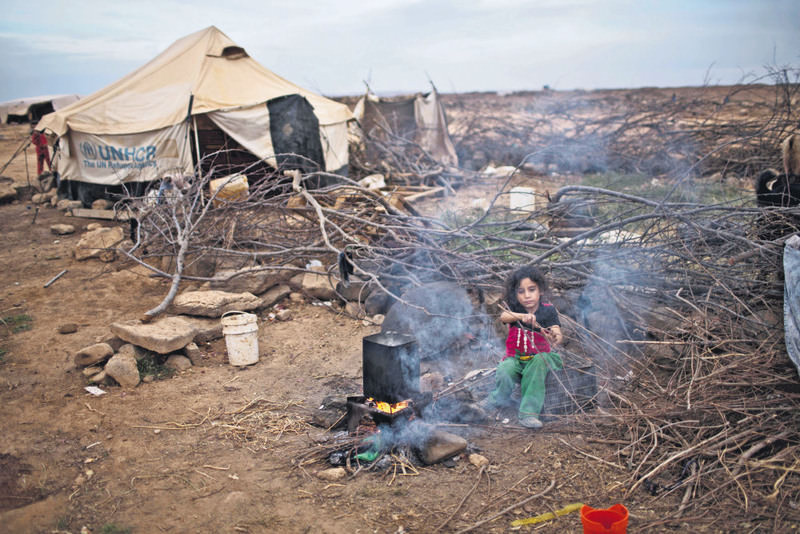 Syrian refugee Aysha Elwan, 5, helps her mother break wood to add to the fire to boil water outside her family's tent at an informal tent settlement on the outskirts of Mafraq, Jordan.
by Kılıç Buğra Kanat Dec 21, 2015 12:00 am

The Kremlin's declaration that Russia will continue its airstrikes carried out in the name of fighting DAESH, but in reality are targeting the moderate groups in Syria, and the U.S. administration's inconsistent statements about the Assad regime make the future of the country more ambiguous

After more than four years of government crackdowns, killings, massacres, chemical weapons and barrel bomb attacks and hundreds of thousands of deaths, the international community reached an agreement to contain the crisis in Syria. A resolution about this agreement was voted on by the U.N. Security Council and unanimously accepted. The major question is if it can bring peace and stop the bloodshed in Syria and, more importantly, will this agreement end the repressive rule of the Syrian President Bashar Assad's regime and create an inclusive government that will transform Syria into a pluralistic democracy?

Since the declaration of this resolution, almost every observer of Syrian politics has raised a different red flag about the agreement and stated the difficulties of adopting such an agreement on the ground. It is hoped the cease-fire and the beginning of the peace process will bring permanent peace to the country. But some of the questions about the implementation of the agreement were raised by experts, and if the concerns of observers are for real, there is not much to be ultra-optimistic about before seeing the agreement's outcomes. Even U.S. Secretary of State John Kerry, who is one of the architects of this agreement, expressed caution in his statements after the vote. He said: "No one is sitting here today suggesting to anybody that the road ahead is a gilded path. It is complicated. It will remain complicated. But this at least demands that the parties come to the table."

There are serious questions about the agreement and about the future of Syria. The first one is without doubt about the elections that are supposed to take place within 18 months after talks begin. Considering the huge internal and external displacement of the Syrian population, it is not clear how these Syrians will be able to vote. According to U.S. authorities, what will provide the end of the Assad regime is in part the votes of the Syrian community in the diaspora. More importantly, it is not clear what will happen on the ground during these 18 months if the political authorities do maintain the cease-fire and if Assad runs in the election as a candidate. At this point it does not look like the opposition will accept a resolution with Assad in charge during the transition process. In addition, the Russian government does not look like it will allow the elimination of a key partner in the Middle East without receiving something meaningful in return. For this reason, some U.S. diplomats in a recent report stated that "Russia had indicated it had no problem with the eventual ouster of Assad at the end of a transition period, though it would not admit that publicly."

The U.S. administration is also giving mixed messages about the fate of the Assad regime. Although U.S. President Barack Obama restated his decision that Assad must go, Kerry's statements during his visit to Moscow resulted in serious confusion. Finally, Assad does not seem to accept this agreement and at this moment it is not clear who will persuade him to do so.

Another important point about the agreement regards the role of the Russian government during this process. It was stated at the press conference that the majority, according to some sources more than 80 percent, of Russian aerial attacks have not targeted DAESH. It is not clear at this point if this pattern will continue following the agreement. A few days after the signing of the agreement, Russian President Vladimir Putin declared Russian readiness to increase its military presence in Syria. So there are still questions in the minds of strategists about Russia's end goal and exit strategy in the region.

The fate of Assad and the future of Russian actions in Syria are two very significant dimensions of the crisis. There will also be other challenges for the drafters of this agreement such as the question of how to ensure the implementation of the cease-fire agreements and how to solve any other potential threat to peace. In fact, although the resolution and agreement are positive steps forward in the containment and elimination of the conflict, there remain serious steps that need to be taken to stop the bloodshed in Syria.