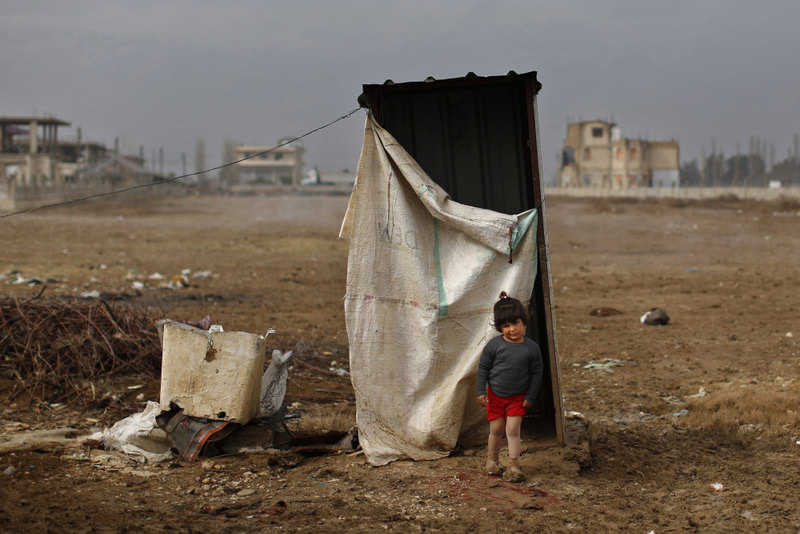 A Syrian refugee girl standing in mud from the heavy rain as she leaves a restroom at a refugee camp in the town of Hosh Hareem, Bekaa Valley in east Lebanon.
by Kılıç Buğra Kanat Jan 19, 2016 12:00 am

Finding new ways to terrorize its own people by the day including the use of chemical weapons, barrel bombs and the recent tactic of starvation, the Assad regime continues to violate not only the international law but also the agreements which Assad himself had signed

This column and hundreds if not thousands of others in this paper, have for the last few years detailed the significant tragedies inflicted on the Syrian people. Horrific incidents, such as the use of barrel bombs in the city centers by the regime's air force, the use of chemical weapons in the eastern Damascus district of Ghouta in August 2013 and the torture and inhumane treatment, have made Syria's geography the most well-documented map for crimes against humanity and war crimes in recent decades. As the international community has become less of a deterrent to the Assad regime, the regime has increased the threshold of persecution and violence against civilians in the country.

WEAPONS SECTOR IN A DAZE

This pattern of behavior was most apparent with the use of chemical weapons by the regime. The regime started to move and prepare for the use of chemical weapons almost one year prior to the horrific deployment in Ghouta in 2013. Following U.S. President Barack Obama's "red line" statement, reports emerged that the Syrian forces were using chemical weapons in several other areas. Months after the president's statement, Foreign Policy released a secret State Department cable which indicated signs of chemical weapon use by the Assad regime in Homs. This early report was disputed by the White House and State Department. However, a few months after Le Monde published a very detailed report about chemical weapon use, which the reporters said they had witnessed the use of these weapons in multiple different instances. In this report, Le Monde reported the attacks and the symptoms of the weapons used. It was stated that "No odor, no smoke, not even a whistle to indicate the release of a toxic gas. And then the symptoms appear. The men cough violently. Their eyes burn, their pupils shrink, their vision blurs. Soon they experience difficulty breathing, sometimes in the extreme; they begin to vomit or lose consciousness. The fighters worst affected need to be evacuated before they suffocate. Reporters from Le Monde witnessed this on several days in a row in this district, on the outskirts of Damascus, which the rebels entered in January..."

The report indicated that these attacks might be a test case for the Syrian government to increase the intensity and frequency of the attack later. The report indicated, "The aim of the attacks seemed to be essentially tactical at this stage - an attempt to destabilize rebel units in areas where government soldiers have been unable to dislodge them, and at the same time a test. If Syrian army forces could dare to use chemical weapons in their own capital without setting off a serious international reaction, would that not be an invitation to pursue the experiment a bit further." Throughout 2013, while the international community remained inactive, the regime gradually increased the intensity and frequency of these attacks. Finally in August 2013, exactly a year after Obama's "red line" statement, the Syrian regime conducted its most horrifying chemical weapons attack in Ghouta. While the international community was expecting a robust response from the US and major powers, the Syrian regime saved itself from such a response by purportedly giving up its chemical weapons. However the regime continued to kill, employing conventional weapons with the same intensity. Barrel bombs continued to kill civilians in the cities.

Moreover reports emerged that the regime had started to use chemical agents such as chlorine gas against Syrians throughout the country as part of Assad's strategy of collective punishment. Later these claims were verified by humanitarian organizations, including Human Right Watch (HRW). In a press release, HRW stated that "evidence strongly suggests that Syrian government forces used toxic chemicals in several barrel bomb attacks in Idlib governorate between March 16 and March 31, 2015.

Syrian rescue workers reported that these attacks affected at least 206 people, including 20 civil defense workers. One attack killed six civilians, including three children. The attacks violated the Chemical Weapons Convention and a United Nations Security Council resolution." This demonstrated that although some claimed the agreement with Assad facilitated by the Russian government about giving up its chemical weapons, the regime still owns and uses chemical agents in Syria. A few weeks ago, some U.S. officials stated that in one instance the video evidence "appears to be credible." In a report on CBS, it was mentioned that "Syrian government forces may have used poison gas in an attack on a rebel-held town just outside Damascus this week. U.S. officials say that video evidence posted by Syrian opposition groups showing victims, some wearing breathing masks and others with tubes siphoning blood from their lungs, appears to be credible."

These reports and stories of the use of chemical weapons and inhumane methods by the regime are well-known around the world. At this critical juncture of civil war in Syria, it demonstrates two things about the pattern of behavior of the regime of Syrian President Bashar Assad. The first one is an under-reported tactic of starvation of Syrian cities. Recently this started to be used more "effectively" by the Syrian regime in the town of Madaya. Over the last few months, humanitarian groups are voicing the seriousness of the situation in the town. The more than 40,000 people living in the town are encircled by Syrian regime forces. Around 30 people have reportedly already died as a result of starvation, but the degree of malnourishment and the impact on the elderly and kids has increased in the last few weeks. A few days ago, The New York Times reported that "People there make soups of grass, spices and olive leaves. They eat donkeys and cats. They arrive, collapsing, at a clinic that offers little but rehydration salts. Neighbors fail to recognize neighbors in the streets because their faces are so sunken." Although since then some aid convoys allowed to enter the city, the witnesses describe the graveness of the situation. U.N. Secretary-General Ban Ki-moon declared that "the deprivation of food as a weapon is a war crime," but it is not clear how the calls of the international community, the reports of the humanitarian groups and the deprivation of the thousands in Madaya would change the behavior of the regime, which so far committed so many war crimes and crimes against humanity without any impunity. The tactic that Assad has used in Madaya, if it will not be prevented by the international community, can be another test case for Assad to increase the intensity and frequency of this horrible tactic against civilians, just as he has with chemical weapons.A second lesson that we can take from the pattern of behavior of the Assad regime is related to his continuous violation of the agreements which he had signed with the international organizations. In the last four years, the Assad regime has violated numerous international norms and conventions by committing horrifying crimes. The use of chemical weapons was only one, and according to reports mentioned above, he even violated agreements he signed against the use of chemical weapons. In a few days, peace talks in Geneva concerning the conflict in Syria will resume, and due to his previous record regarding international agreements, the international community needs to watch the Assad regime carefully.
Last Update: Jan 19, 2016 1:30 am
RELATED TOPICS