Obama's legacy in the Middle East 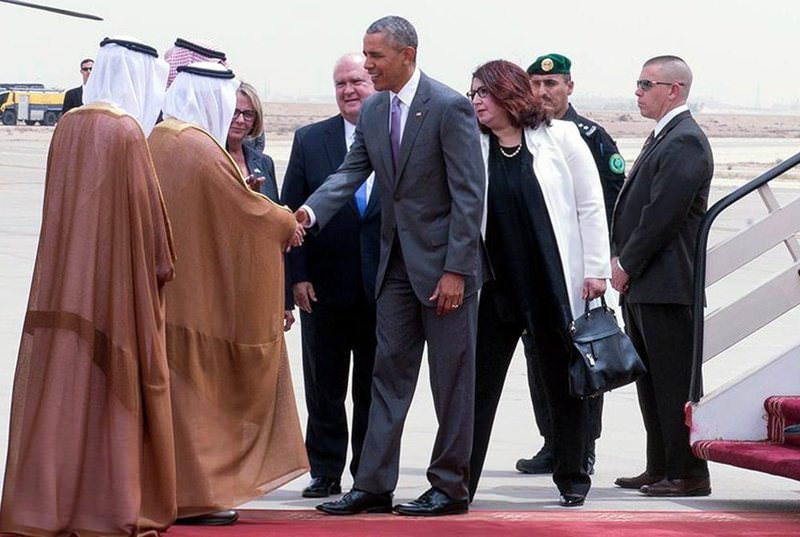 Iraq and Syria will haunt Obama's legacy in the future and, for many, the emergence and rise of DAESH and failure to destroy the organization will also leave a stain

U.S. President Barack Obama's trip to Saudi Arabia last week was one of the most significant topics in international relations. The trip and the issues that were discussed during this trip attracted attention to the legacy that Obama will leave after his presidency. Initially, everybody had high hopes and expectation from a president whose main message in elections was change. This change meant different things to different people in different parts of the world. For people in the Middle East it meant the U.S. as a responsible super power that plays a constructive role in the region, which avoids unilateralism and whose approach to the Middle East would be different than the policies of previous President George W. Bush. The Middle East was ready for new types of relations with the U.S. However, after seven plus years of Obama, the assessment of his presidency during this trip was not full of positive anecdotes.

Of course, when we are talking about Obama's legacy in Middle East, the Syria files will top the list. Many analysts have already raised this issue as Obama's most significant blunder in his presidency. A few weeks ago, Jennifer Rubin wrote in The Washington Post that a horrific genocide is Obama's legacy in the Middle East. She said: "In setting up the fleet of straw men – we either do nothing or we 'commit to governing the Middle East and North Africa' – perhaps Obama derives some rationale for his failure that allows him to sleep at night. But, in fact, there is not an ex post facto rationalization to justify passivity in the face of genocide when both humanitarian and strategic interests coincide, especially when early minimal action could have staved off disastrous results." Obama's former Middle East advisor Phil Gordon last week expressed similar views about the handling of Syria by the Obama administration. In an interview he said: "I came to the conclusion as early as late 2013 that we were pursuing a policy that had very little chance of working, and at very high cost. … I think it is fair to say that we ended up doing enough to perpetuate a conflict, but not enough to bring it to a resolution."

But when it comes to legacy, of course Syria is not the only case. It also seems the situation in Iraq will haunt Obama's legacy in the future. For some others the emergence and rise of DAESH and failure to destroy this organization will leave a mark on Obama's legacy. For instance, last week in The Washington Post, Jackson Diehl wrote: "There will be no liberation of Mosul in 2016. The Islamic State [DAESH] will outlive the U.S. administration whose lapses in Syria and Iraq helped to create it. It will be the ugliest piece of Barack Obama's legacy." In another editorial last week, Obama's latest attempt to increase U.S. personnel in the country was criticized. It said: "Iraq will get 200 new U.S. personnel, Apache helicopters, and more aid for the Kurds. It won't defeat the Islamic State, but it might be enough pass the blame to the next president."

Some of the articles published in the last few weeks also demonstrated that there were still others who hoped Obama would stay on the side of the people during the uprisings in the Middle East. Referring to his Cairo address and his inauguration speech, Alex Rowell wrote that he disappointed many: "In the event, however, as millions in the Middle East have since learned to their incalculable cost, it was neither the juntas nor the jihadists who broke the terms of Obama's proposal, but the president himself. For when his extended hand was met with a still-clenched fist, it transpired he was happy to smile and shake the bulging knuckles anyway. What's more, he wrapped his palms over these fists even as they squelched with the fresh blood of their own people."

Of course, his approach to U.S. allies in the Middle East raises no less criticism. It has been one of the most frequently made about Obama's foreign policy in the Middle East. The Wall Street Journal last week evaluated Obama's trip to Saudi Arabia as an attempt to save some dimension of his foreign policy legacy: "Mr. Obama aimed to use his 28-hour visit to address a wide range of concerns voiced by frustrated allies, including opposition to the Iran nuclear deal and qualms about U.S. policy in Syria. With just nine months left in office, this trip may be the president's last best chance to secure his foreign-policy legacy in the region." The same topic was covered on the editorial page of Daily Sabah last week. The editorial, "Frustrated with Obama, Turkey, Israel and Saudi Arabia go their own way," said: "For U.S. allies in the Middle East, including Turkey, the Obama years have been unkind. Gone were the days of W›s unilateral interventionism and trigger-happy counterterrorism experts. Instead, we got stuck with an administration that was more interested in photo-ops and skillfully-crafted speeches than the dirty work of ruling the world."

Obama, however, has already made up his mind about the legacy of something else. In an interview on Fox News he responded to a question about his worst mistake during his presidency: "Probably failing to plan for the day after, what I think was the right thing to do, in intervening in Libya." He had made a similar remark a few weeks before in an interview with Jeffrey Goldberg of Atlantic Monthly, calling Libya a "mess" mostly due to the incompetence or unwillingness of the European leaders.

All of these issues will haunt Obama's legacy after his presidency ends. Some have already started to make judgments about his legacy. In Al-Arabiya last week, an analysis of Obama's foreign policy was titled "History will judge Obama's foreign policy legacy as one of failure." We will continue to see similar opinions in the coming years. The unilateral intervention the Bush era left was replaced by unilateral non-intervention. The unpopularity of pre-emptive action transformed to unpopular inaction. The concept of burden sharing started to be implemented as averting the responsibility of a superpower. The goal of creating and strengthening alliances could not be achieved. Now everybody in the region is watching the U.S. elections.