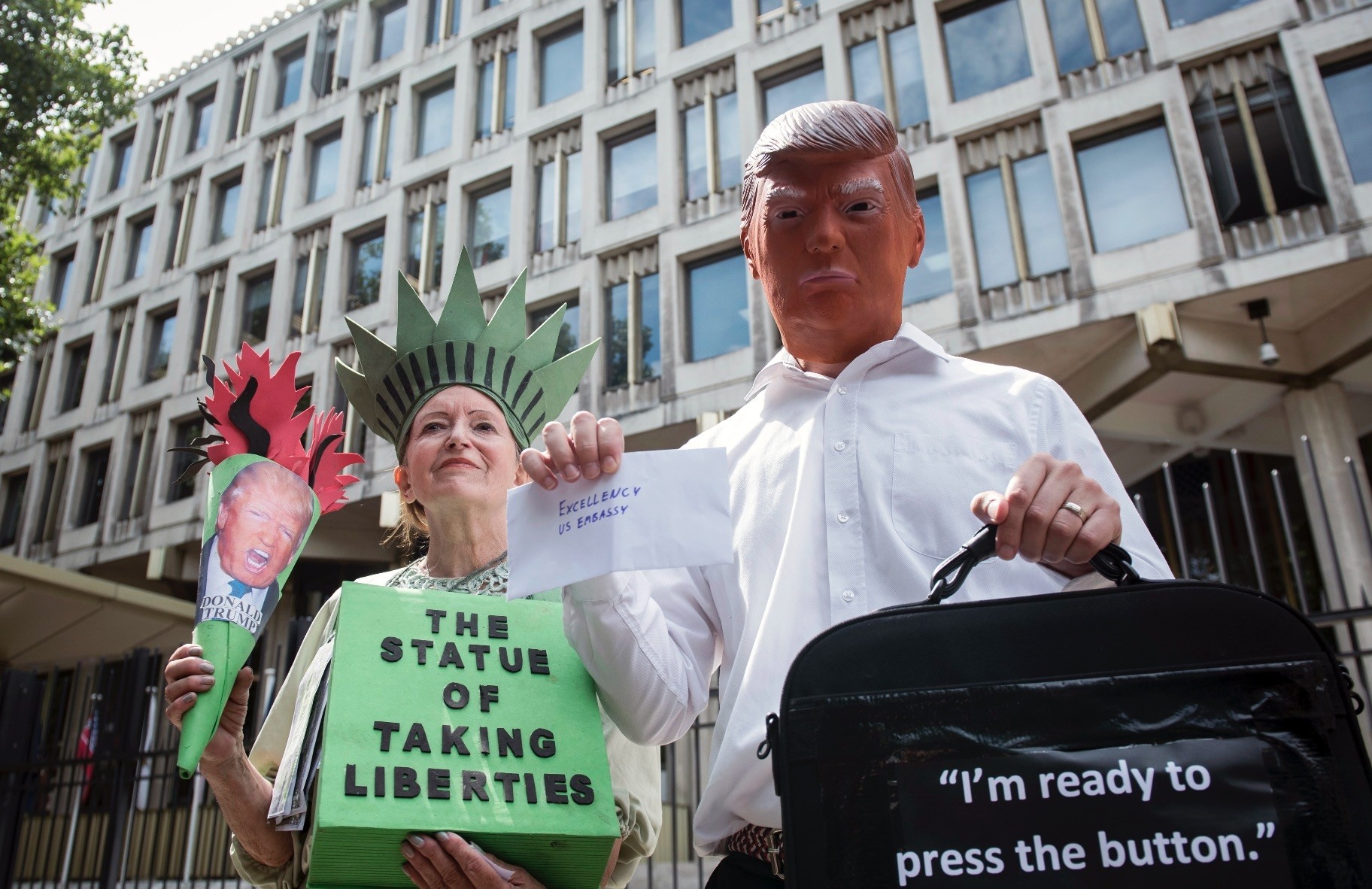 Campaigners take part in a protest against the nuclear tension between the U.S. and North Korea, outside the U.S. Embassy in Grosvenor Square, central London, Aug. 11.
by Kılıç Buğra Kanat Aug 14, 2017 12:00 am

Trump should take into account public opinion in the U.S.'s two allied states in the region, South Korea and Japan, before escalating its nuclear tension with Kim Jong Un

The North Korea crisis was the top story last week. Since my last column tensions between the U.S. and North Korea have continued to escalate on both sides. U.S. President Donald Trump signaled military intervention in his statements and tweets while the North Korean media continued to threaten the U.S. Trump tweeted last week, "Military solutions are now fully in place, locked and loaded, should North Korea act unwisely."

Also the reports in the North Korean media that the military is preparing to test a missile near Guam sped up the escalation. However, there are other parties in the region that have been watching the developments warily. If there is a military escalation in the region, Japan and South Korea will be the most vulnerable countries. Thus, the local populations in these two countries have been paying very close attention to the recent exchange of threats between North Korea and the U.S. Because of the continuous threats from North Korea over the years, the people in these two countries have developed immunity to this kind of situation. However, they are also aware that this time the conditions are slightly different.

On the one hand, there are reports that the North Korean regime recently increased its capability in missile technology thus increasing the threat to the U.S. and its allies in the region. On the other hand, the discourse from the U.S. administration is very much a departure from the past. The threats that President Trump has directed at North Korea during this crisis may generate multiple different outcomes. It can be a deterring factor that will halt the increasing aggressiveness of the North Korean regime or it may generate further aggressiveness and further misperception due to a possible state of panic among the regime elite.

The people in Japan and South Korea are rather ambivalent about this escalation. For South Korea, a military escalation could be extremely costly. Even if the U.S. finds and destroys all of the nuclear weapons in North Korea, which reportedly is almost impossible to achieve at this point, it is being argued that North Korea can still deal major damage to South Korea with its other weapons of mass destruction as well as its huge stockpile of conventional weapons. Because of this high risk, there is constant emphasis from Seoul that there should be a resolution through dialogue. The government in almost every opportunity stated that they are not in favor of another war on the Korean peninsula.

Primarily due to President Trump's tweets, there are also fears that the U.S. might go alone in this military escalation without consulting with South Korea, which would be one of the regime's first targets. Because of that, after the conversations and communication between the U.S. and South Korean officials, the statements underlined that there will be a step-by-step approach and there will always be coordination between the two countries during steps taken against North Korea. In the last week, the verbal escalation and mutual threats from both sides had an immediate impact on the South Korean economy. The continuation of this situation will increase the damage to the South Korean economy.

In contrast, the issue of Japan is more complicated. On the one hand, the Japanese are feeling the heat of the escalation and are concerned about Pyongyang's increasing nuclear capability. North Korean plans to target Guam's waters over Japan increased these concerns. In the declaration of the plan from Pyongyang, it was also said that "The D.P.R.K. has already acquired the capabilities of reducing the Japanese archipelago to ashes in a second once it makes up its mind," thus U.S. pressure on North Korea about its nuclear program is more than welcome for many. There is however a lack of consensus about the possible role of Japan in the case of such an escalation. Japanese Prime Minister Shinzo Abe has been trying to increase the military capacity and capability of the Japanese forces by changing the limitations that were put on it in the Japanese constitution. So far the crisis in the Senkaku Islands has been given as the main reason for the need for a constitutional amendment, however now with the increasing threats from North Korea, the Japanese government now has renewed motivation. Nevertheless Prime Minister Abe's willingness to take this step faces opposition from the public. A large part of society in Japan is against any form of militarization or escalation by Japan.

At this critical juncture, this coming week will be particularly important due to the Aug. 15 celebrations on National Liberation Day, on both sides. Especially in the North, this escalation together with the mood on National Liberation Day may generate risky discourse or behavior that will deteriorate the situation. A potential missile test in this atmosphere can risk any attempts to resolve the conflict.