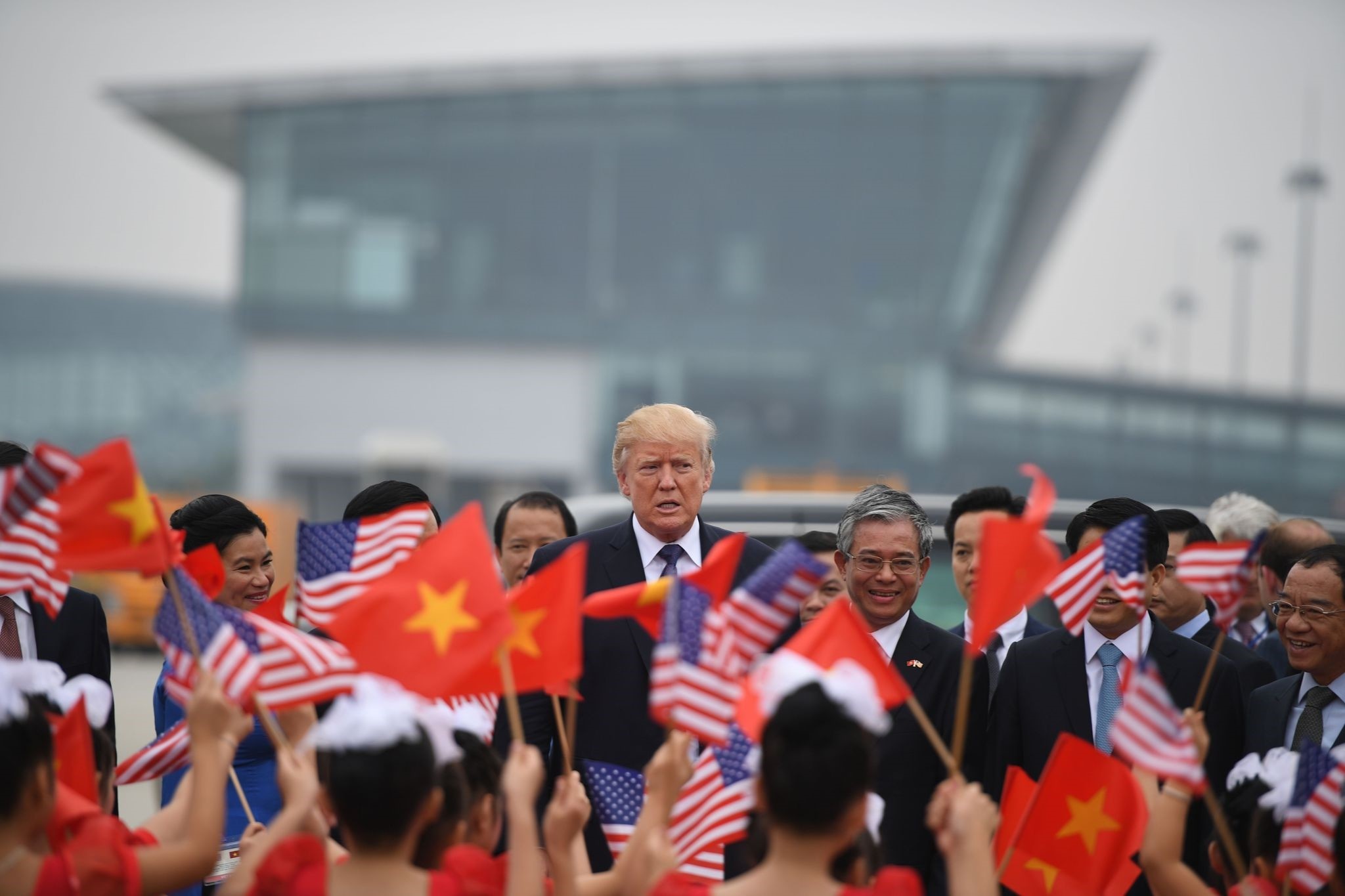 President Donald Trump watches as young girls wave U.S. and Vietnamese national flags before boarding Air Force One to depart to the Philippines, at the airport in Hanoi, Vietnam, Nov. 12.
by Kılıç Buğra Kanat Nov 13, 2017 12:00 am

Due to the presence of many factors it becomes hard to understand the U.S.'s plans in Asia, and after Trump's visit, his administration has a difficult job of explaining its 'plan' for foreign policy

When U.S. President Donald Trump's Asia trip started, I had written in this column, "It is one of those visits that can either be very critical and even historic in terms of its outcomes or be nothing of significance. There is so much uncertainty and so many loose parts that can destabilize the region."

One of those uncertainties was regarding U.S. foreign policy towards the region. It was an opportunity for the Trump administration to clarify its position in regards to developments in the region. So far, the only clear issue has become the opposition of Trump to any form of multilateral trade agreements that will include these countries. And it is actually the most consistent policy of Trump throughout the world.

During his visit to Vietnam, in a meeting of Economic Cooperation, President Trump underlined his commitment for an America first approach, signaling further economic unilateralism.

"We are not going to let the United States be taken advantage of anymore. … I am always going to put America first, the same way that I expect all of you in this room to put your countries first," he said.

In an age of increasing economic cooperation and free trade negotiations, the statements seemed at odds with the current trend and decades-long policy of the U.S. to liberalize economic order and fight trade barriers and protectionism, but consistent with President Trump's policy.

"What we will no longer do is enter into large agreements that tie our hands, surrender our sovereignty and make meaningful enforcement practically impossible," he also said.

Of course this policy of economic nationalism and anti-multilateralism has already been generating adverse outcomes. China, for instance, has already been presenting itself as the defender of the liberal economic order around the world. Xi's speech in the same forum reflected this reality.

In the meantime, the other countries negotiated another trade agreement; excluding the U.S. Eleven countries are running the negotiating with the leadership of Japan. This situation signals a new economic order, and it is not clear if the U.S. is ready to handle such an order. In an age of increasing relevance of geo-economics, protectionist policies may bring challenging outcomes for states like the U.S. and result in extremely problematic instances.

In other policy areas, the President Trump's Asia trip brought less clarification. For instance, during his visit to China, President Trump stated that it's the former U.S. administration that needs to be blamed for the trade deficit. Thus, he stopped accusing China of "raping" the U.S. economy. This was interpreted as part of the process of normalization in economic relations with China. It was actually a process that was launched during the Mar-a-Lago summit between Xi and Trump. It was also widely reported that Chinese support for resolution of the North Korean crisis was considered as a possible way to resolve trade problems with the U.S.

However, in his speech at the same forum, President Trump targeted China once more without naming it. His words against "government-run industrial planning and state-owned enterprises" and "product dumping, subsidized goods, currency manipulation and predatory industrial policies" definitely targeted China's economic practices that he frequently criticized during his run for the presidency. Thus, the inconsistency in the discourse continued, but he managed to have a clear distinction between policy and politics.

In a speech he said, "No dictator, no regime, no nation should ever underestimate American resolve. … Every once in a while, in the past, they underestimated us. It was not pleasant for them, was it? ... We will never yield, never waver and never falter in defense of our freedom."

This clear message against North Korea later turned into a competition between Trump and Kim. After Kim's insults, President Trump tweeted, "Why would Kim Jong-un insult me by calling me 'old,' when I would NEVER call him 'short and fat?" Later however, he said he could meet with Kim, and he would be capable of getting a better deal. This situation once more generated inconsistencies and controversies.

In China, he thanked China for its support in this case; however, again in Vietnam he asked for a collective enterprise to deal with this threat. So as of today, we don't know what the U.S. is looking for in regards to North Korea.

This synopsis of Trump's statements demonstrated continuous challenges that the U.S. administration and U.S. allies will face in the coming months in regards to the direction of U.S. foreign policy. Due to the presence of many factors it becomes hard to understand the U.S.'s plans in Asia, and after Trump's visit, his administration has a difficult job of explaining its "plan" for foreign policy.