U.S. falls from grace among allies, particularly in Turkey 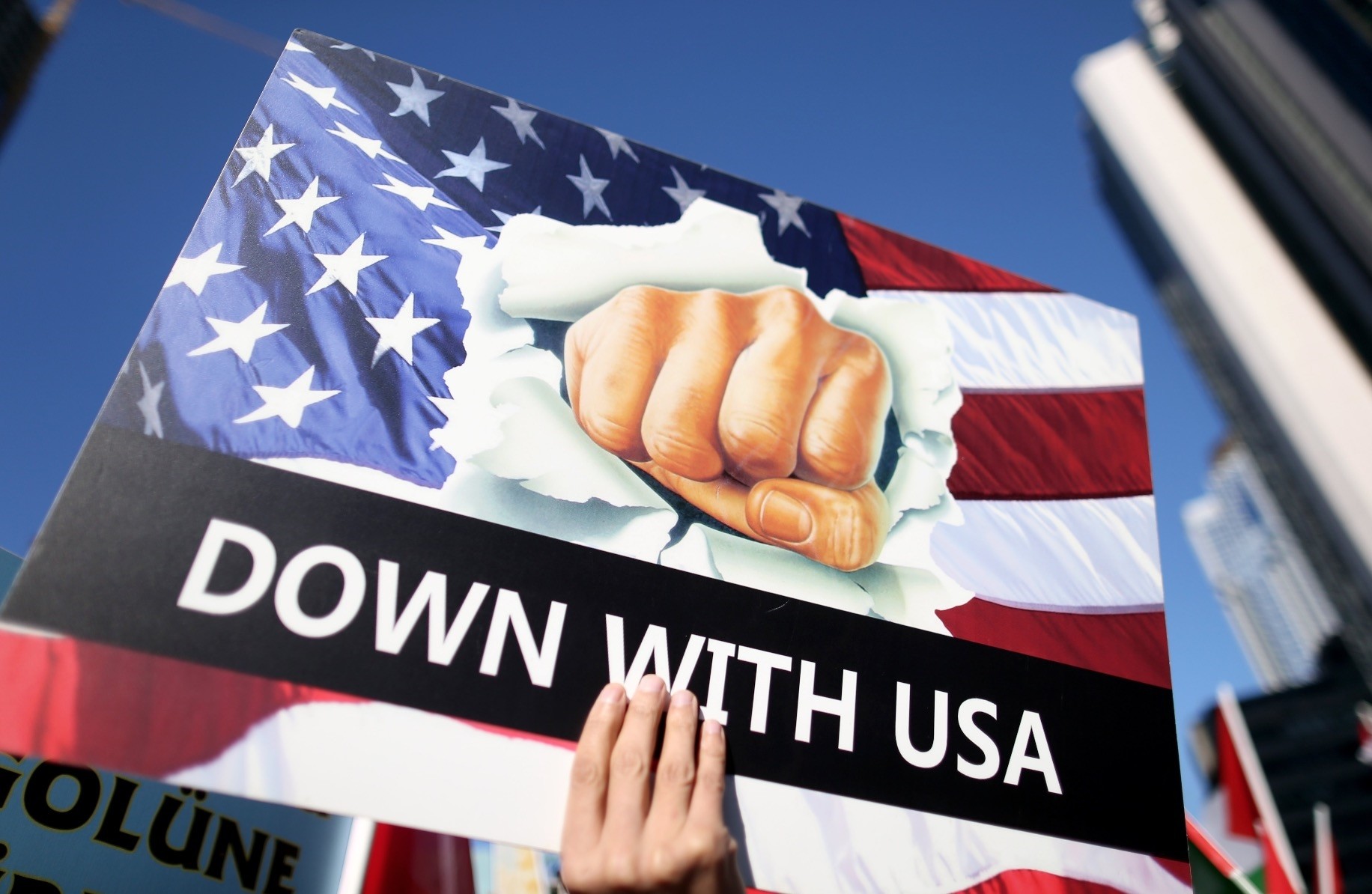 A Turkish man holds a placard reading u201cdown with the USAu201d during a protest against U.S. President Trump for recognizing Jerusalem as the capital of Israel, in front of the Israeli Consulate, Istanbul, Jan. 7.
by Kılıç Buğra Kanat Jan 13, 2018 12:00 am

The attitude of the U.S. administration following the terrorist attacks in Turkey and the July 15 coup attempt had disappointed Turks and negatively affected the already damaged image of the U.S. in Turkey. Following the coup attempt, the U.S.'s increasing support for PKK-affiliated People's Protection Units (YPG) in Syria and the lack of improvement in the extradition case concerning the leader of the Gülenist Terror Group (FETÖ), Fetullah Gülen, have deepened this problem. While many in Turkey were expecting a sea change in relations, particularly in the public diplomacy aspect, following the election of Donald Trump as the U.S. president, in the last year, things have not improved as expected.

In the last year, the U.S. decision to stop visa services at its missions in Turkey, which have recently been reinstated, was one of the most damaging policies affecting public opinion in Turkey. The fact that such a measure has never been adopted against a NATO member before and that the decision was not conveyed to Turkish officials before its implementation strained diplomatic ties, but more importantly, it shocked the Turkish public. For months, Turkish citizens had to face various difficulties receiving entry visas to the U.S., and it elicited second thoughts for many who wanted to pursue education or business ventures in the U.S. The statements and explanations from the U.S. Embassy created confusion and raised unfavorable views about the U.S. in Turkey.

The public reaction grew as Trump announced his decision to recognize Jerusalem as the capital of Israel. While Ankara has become one of the most vocal critics of this decision and pursues different diplomatic paths to convey the reaction of many countries around the world, the Turkish public was on the streets from the first day to express its dissatisfaction. Just before the U.N. General Assembly vote on the issue, threats by Trump and U.S. Ambassador to the U.N. Nikki Haley further aggravated this situation. While many considered the end of the visa crisis a positive step in fixing the damage in public opinion, last week, the U.S. State Department announced its new travel advisory and put Turkey on Level 3, recommending that U.S. citizens reconsider plans to travel to Turkey due to "terrorism and arbitrary detentions." In the midst of the crisis in relations between the two countries, the attempt to limit social and economic interaction will definitely not serve the best interests of both countries. It will limit interaction and increase the possibility of misperceptions and miscommunication between the countries and their people.

It is obvious that the current administration in the U.S. does not have a policy for Turkey. However, to fix some aspects of relations does not necessitate a comprehensive Turkey strategy. Every expert in both capitals would agree that winning the hearts and minds of the people in Turkey should constitute a priority for any administration. Thus, even though there is no policy about U.S. relations with its allies and even though different branches of the U.S. administration are having problems in coordination and delivering their messages, winning the hearts and minds of the people in an allied country should not cause a major controversy or crisis. In each and every meeting on bilateral relations between Turkey and the U.S., experts and observers also raise this issue as a serious hurdle that needs to be taken care of. At this critical time, the U.S. administration and its branches needs to understand the gravity of the state of the U.S.'s image in Turkey and take steps to reverse this trend of isolating itself and distancing its allies' people. The continuation of this trend will make it quite hard to reverse in the future.