What is US-YPG cooperation for? 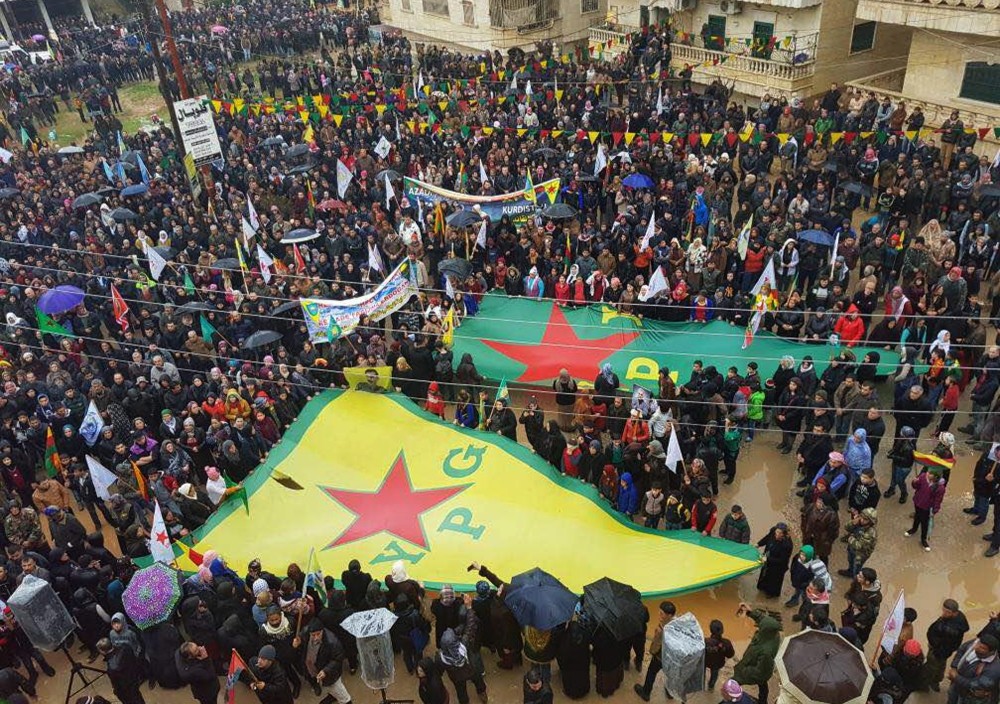 YPG supporters wave giant flags during a protest against Turkey's counterterrorism operation into Afrin to eliminate YPG terrorist elements near its borders to protect the safety of both its own people and Syrians, Syria, Jan. 18.
by Kılıç Buğra Kanat Jan 20, 2018 12:00 am

This column has repeatedly said that the tension caused by the U.S.'s relationship with the People's Protection Units (YPG) in Turkish-American relations is a crisis that will have long-term ramifications for the ties between the two NATO allies. Somehow since the beginning of this crisis, the U.S. has assumed that it could handle Ankara's reactions and keep bilateral relations intact while cooperating with the YPG in northern Syria. The serious risks of arming the YPG and providing legitimacy to a terrorist organization were underestimated alongside the threat that such an organization could pose to Turkey. U.S. officials who asked their Turkish counterparts to be patient about the YPG until Daesh was defeated in the region never properly took into account Turkey's national security concerns. Although Washington made statements underlining that Ankara's concerns had been recognized, no changes were ever made.

This course of action has generated negative reactions in Turkish society, which has been suffering from the PKK terrorism for the past 30-plus years. Because of its support for the YPG, the U.S. has increasingly been seen by Turkish society as siding with the PKK. The threat of the PKK was something that united Turkey. Policymakers in Turkey were already frustrated with U.S. policies. This situation will unavoidably impact the military ties of the two countries, as well. The fact that the U.S. is training and equipping members of a terrorist organization in Syria, while some other members of that terrorist organization target the Turkish military and civilians in Turkey is an unacceptable and inexcusable blunder for a NATO ally.

For the last four years, there was an urgent need to take steps to contain this fallout in bilateral relations. However, there was no major move from the U.S. The public diplomatic disasters of some U.S. officials and their social media messages just made everything worse. In the last week, the fragility of the bilateral ties in the context of northern Syria and tension became very obvious when the U.S.-led coalition announced that they would be forming a new border security force in northern Syria using YPG members. Although U.S military assistance for the YPG had already deteriorated the U.S.'s image in Turkey, some were still expecting a U-turn from the new administration. Because of the statements from some U.S. officials, some were still projecting the end of the YPG-U.S. relationship following the capture of Raqqa from Daesh. However, following its statement about the border security force, the U.S. demonstrated its willingness, for whatever reason, to continue what it has called its tactical, temporary and limited partnership with the YPG. Following strong reactions from Ankara, both the Pentagon and the State Department defended the move by saying it would not be a border security force. U.S. Secretary of State Rex Tillerson also made a statement recognizing the mistake in the previous announcement.

However, this quick fix in rhetoric did not solve any problems. It just appears as though the rather controversial labeling of this new unit by U.S. Central Command (CENTCOM) was glossed over through the diplomatic charisma of officials in Washington. The fact that the U.S. expressed its willingness to continue to work with the YPG can be interpreted as a move to build up the YPG along the Turkish border. And this crisis has been taking place while Turkey is preparing a military operation to clear the YPG from its border in Afrin. Since it began, Turkey has been unable to understand the U.S.'s cooperation with the YPG. Now with conflicting statements from the U.S. government, it has become more challenging to follow U.S. policies and to understand the long-term objectives and logic of a partnership between the YPG and the U.S. This will only make things worse in bilateral relations.