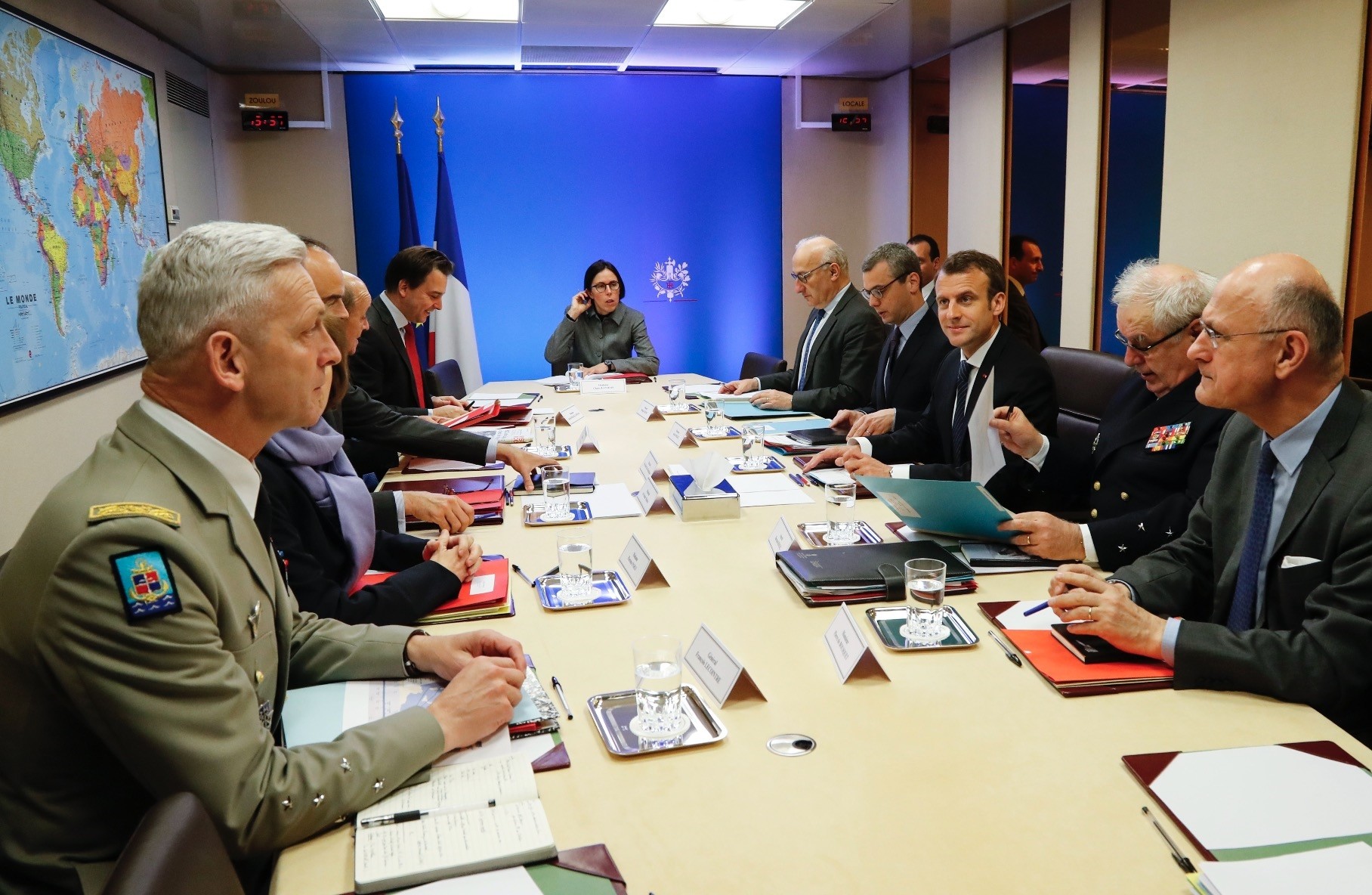 French President Emmanuel Macron attends a Defence Council at the Elysee Palace, after the U.S., U.K. and France carried out strikes against Syriau2019s regime in response to a chemical weapons attack, April, 14.
by Kılıç Buğra Kanat
Apr 16, 2018 12:00 am

Even though the U.S., U.K. and France acted against Bashar Assad's use of chemical weapons, it's not the first time nor will it end the plight of the Syrian people

After a week full of speculations and discussions, the U.S.-led coalition conducted limited airstrikes against the Syrian regime's chemical weapon production and storage sites on Friday evening. President Donald Trump made a statement explaining the rationale of the military strikes and in an hour the Pentagon started to brief the media about the targets and the weapons used in the attack. The expressed motivation of the attacks was explained as deterring the Syrian regime from using chemical weapons.

Of course as mentioned in the previous pieces in this column, such an action may be considered important to deter another chemical attack; however we have seen that neither the "red line" statement of President Barack Obama nor the "red line action" of President Trump following the chemical weapons attack changed the views of the Syrian regime. Even after the punitive strikes of the Trump administration last year in April, the Syrian regime continued to use these weapons. The bombing of emptied air bases could only have such a degree of impact. And it is not clear how much the bombing of chemical weapon facilities would change the approach of the Assad regime in the conflict. It should be clear to anyone that these chemical weapons do not explode by themselves.

There are some actors who are responsible for producing these weapons and using them against the Syrian people. There is a hand on the trigger. And this is the second time that this hand on the trigger can use chemical weapon attacks with impunity. Although the U.S., U.K. and France's statements in the aftermath of the chemical weapon attack signaled that they will be ready and loaded in case of a chemical weapon attack in the region, time will show if the Bashar Assad regime be deterred enough or not. It is important to remember that even though these attacks were interpreted as a "red line" by the U.S., U.K. and France, these attacks will most probably be a "green light" for the Assad regime to continue its actions with conventional weapons. Thus, it will not end the plight of the Syrian people and not give an end to the atrocities committed by the regime for the last seven years.

Furthermore, in the statements following the attacks, all of these countries signaled that they do not have a policy in regard to the future of Syria. It is not clear if they want to have one at this point, but the chemical weapon attacks, the rise of terrorist organizations from the territories of Syria and increasing complexity of the conflicts in the region should have demonstrated by now that these countries should step up in the resolution of the conflict in Syria. After the rise of different risks from the Syria conflict, the countries unite and find a temporary short term solution to the issue instead of solving the crisis in Syria. For the last three years, instead of approaching a civil war, all of these countries have tried to implement counterterrorism operations in Syria and now again instead of finding a comprehensive solution to the hemorrhaging problem, the three countries are trying just to deter the use of chemical weapons.

These short-term solutions will not leave these countries away from the problems arising as a result of the situation in Syria. From the very moment that Daesh started to be considered as the only problem in Syria, the Turkish government time and again reiterated that Daesh is an outcome of the Syrian civil war and without finding a solution for the cause of the problem there will be other consequences that will necessitate attention and action of the international community. However, these warnings from Turkey were neglected and large parts of the international community turned a blind eye on the deteriorating situation in Syria.

Now we have come to a point that the international community needs to recognize that the conflict in Syria can export other forms of insecurities around the world if it will not be contained and resolved. In each and every instance there will be different reactions and red lines from the international community, but without a collective effort a long-term solution for the problem cannot be achieved. Thus, the latest airstrikes need to be a wake up call for the major powers around the world. There may be different threats that arise as a result of the situation in Syria. The returning foreign fighters problems will be only one of them.

The continuation of the conflict will provide a fertile ground for the rise of different criminal and illicit networks from the region to the world. If these countries do not want to go through the debates, deliberations, speculations and risks of using military force against the threats emanating from the civil war in Syria, and if they do not want to start from the very beginning each and every time to coordinate their policies and reactions, this might be a good time to get together and try to find a solution for it. A solution not only to the immediate security concerns of the Western countries but also to the humanitarian disaster and atrocities of a regime.