Nagasaki as a reminder for all of us 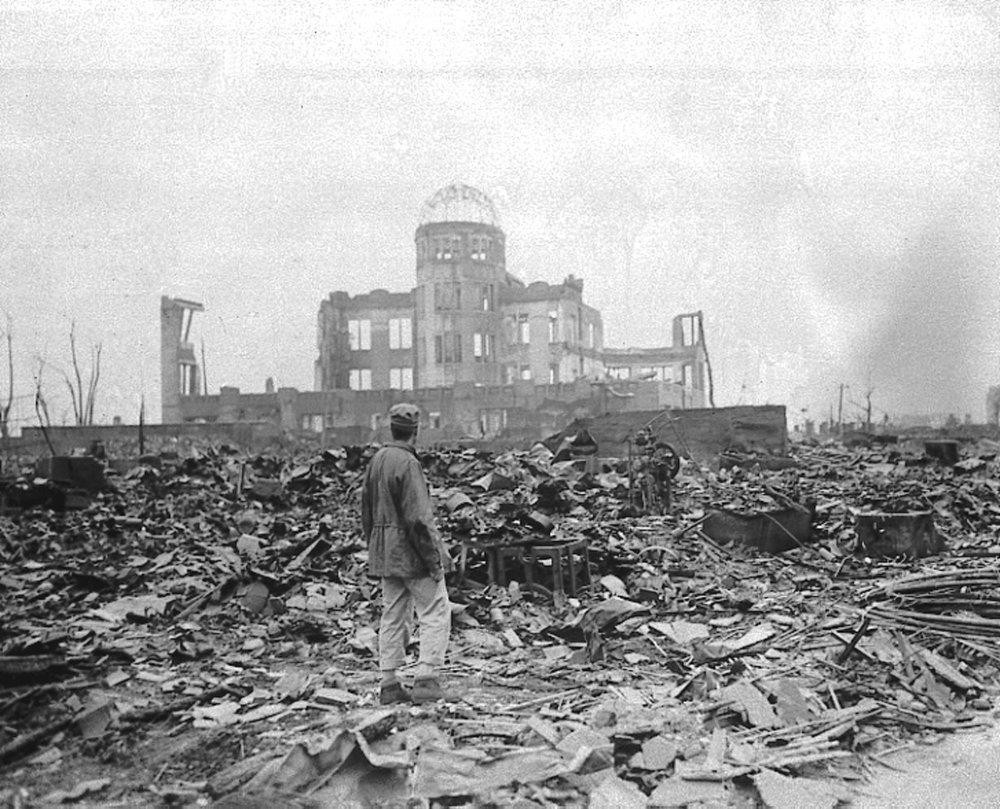 An allied correspondent stands in a sea of rubble before the shell of a building that once was a movie theater in Hiroshima, Aug. 6, 1945 - three days before the another deadly attack in Nagasaki, Japan.
by Kılıç Buğra Kanat Aug 11, 2018 12:00 am

The anniversary of the brutal Nagasaki attack should be an important reminder for all of us, in order not to allow such a deadly incident to happen again in any part of the world

In a recent documentary series David Farrier visits the world's most dangerous and haunted place as a "Dark Tourist" along with other courageous tourists. In the second episode of the series Farrier and his fellow tourists visit the surroundings of the Fukushima nuclear reactor, which was the worst nuclear accident following Chernobyl. No casualty was reported in the immediate aftermath of the incident, though we still do not have the exact numbers of deaths linked to the incident following the evacuation. Farrier walks around some of the towns that are abandoned and haunted by the ghosts of former residents. Even Farrier the lionhearted gets scared of the radiation level at some point, asking the tour guide to leave the area. Following drone footage of the town of Pripyat, which was abandoned by people and slowly taken over by forests, frozen in time after Chernobyl, the scenes from Fukushima seem similar of another ghost town.

Watching the dark tourism of Farrier it is impossible not to think about what happened in the cities of Hiroshima and Nagasaki following the nuclear attacks in the last days of World War II. When one visits the Peace Park at the heart of Hiroshima, the museum at the epicenter of the nuclear explosion provides a glimpse of life in town before the attacks. The fate of the children in town and the suffering experienced is what affects visitors most. The destruction and fire of the atomic bomb did not even leave the traces of the life and toys of the children of Hiroshima. It is impossible to ignore the little pink bicycle that Farrier runs into in Fukushima or the newly opened amusement park in Pripyat. All that remain are the black and white photos and the anime of Tezuka and Miyazaki, who witnessed the air attacks of the U.S. in the cities of Japan and whose work reflect the suffering of the children following those times. One gets the idea of what weapons of mass destruction really mean after seeing what "mass" means in terms of innocent civilians and children. Something we tend to forget when we keep using such terms.

It is hard to understand how the world did not comprehend and understand the potential impacts of nuclear weapons following the reflection of death and suffering by the writers and directors who witnessed these attacks. The nuclear madness of the Cold War years and the rush to nuclear weapons by some of the countries in the 1990s reflect the lack of empathy of those who try to produce more weapons of mass destruction. The unlimited appetite of the military-industrial complex, together with the unnerving attitude of irresponsible leaders, has brought the world to the brink of nuclear disasters many times.

Since the attacks on Hiroshima and Nagasaki, the world has witnessed the use of weapons of mass destruction in different parts of the world. In each and every instance the international community promises to never let these atrocities occur again, however this has not stopped the further use of it. In Syria for instance the use of these weapons has become almost routine. The regime constantly uses such weapons against civilians and members of the international community condemn these attacks yet do not take any measures to stop such attacks. Each of these attacks, just like the use of nuclear bombs in Hiroshima and Nagasaki, kill civilians and children.

Today on the anniversary of the Nagasaki nuclear attack and in a period of rhetorical irresponsibility of superpowers, in regards to foreign and national security, it is important to understand and remember the consequences nuclear arms races and weapons of mass destruction have.