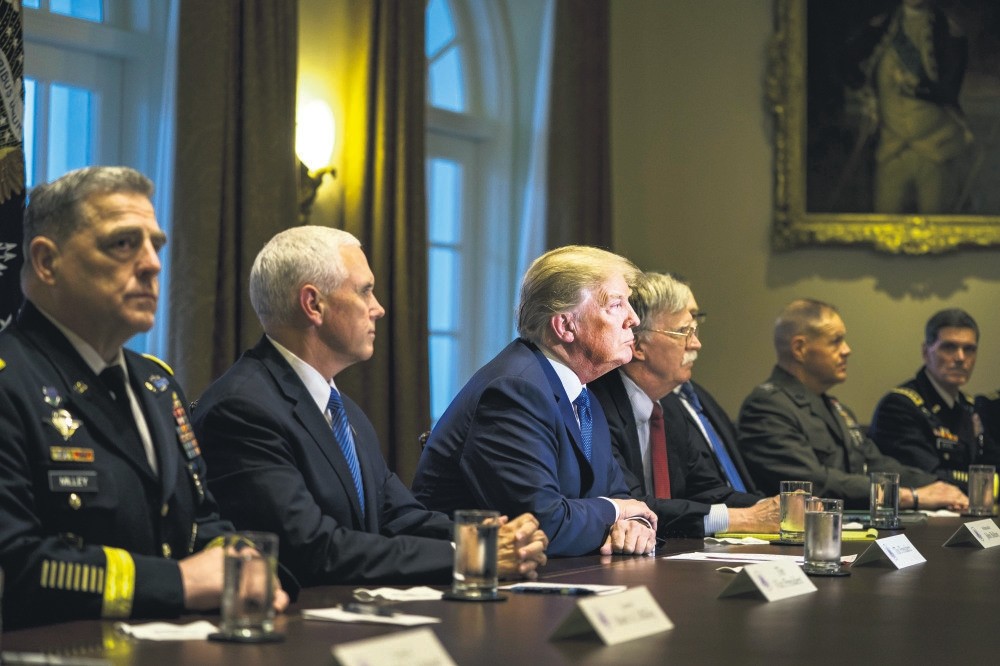 U.S. President Donald Trump (C) speaks with the media before a meeting with his military leadership in the Cabinet Room of the White House, Washington, April 8.
by Kılıç Buğra Kanat Sep 08, 2018 12:00 am

One of the most significant unknowns in Washington for the last seven years has been the Syrian policy. The inconsistency between rhetoric and policy, the absence of a strategy and indecisiveness were considered the pillars of the U.S. position. This issue generated an important source in the loss of credibility for overall U.S. foreign policy, created frictions with U.S. allies in the region and in Europe and led to one of the fiercest interagency disputes in Washington.

Because of this, when then-Secretary of State Rex Tillerson announced the new Syria strategy, not a lot of people bothered to discuss the potential implications of this new strategy for the region and to overall U.S. policy in the region.

President Donald Trump, after assuming power, decided to adopt the policies of the Obama administration. Until recently the most significant actors of the U.S. policy in Syria used to be the Obama appointees. The focus on the fight against Daesh continues to constitute the backbone of Trump's Syria policy. For this reason, the U.S. assistance to the PKK's Syrian wing, the People's Protection Units (YPG) continued to be an irritant for bilateral relations with Turkey, for this reason tactics on the ground continued to shape the U.S. strategy and we therefore continued to hear incoherent statements from different branches of the U.S. government.Now when we approach another critical juncture in the conflict in Syria, the U.S. position shows some signs of change in the last few weeks. However only actions will demonstrate whether this change is something meaningful or not. It is important to remember that, the current administration in the White House put forward different policy proposals from the highest level of the government. President Trump, after the election, indicated the possibility of working with Russia in regards to Syria. Later he signaled that the U.S. is planning to withdraw from Syria. Until recently there were disputes among the different agencies of the government in regards to the U.S. withdrawal from the region. It also stayed inactive during the expansion of the regime's sphere of influence toward southern Syria.

When the Idlib operation started to occupy the Syrian agenda, U.S. policy started to shift from the president's decision to move out from Syria to an alternative plan. The first sign of this change was the constant warnings toward the Syrian regime in regards to the potential use of chemical weapons. For the first time in a while the administration was threatening to directly target the responsible parties in case of the use of chemical weapons in an attack. This message was also conveyed to the Russian counterparts by different members of the U.S. administration. Later another dimension of this new policy started to emerge. This time the members of President Trump's defense team started to express that the U.S. can be potentially staying in the country until the elimination of Daesh. However another objective shortly afterwards started to emerge as the goal of stopping the Iranian influence in the region.

As of now, we don't see much movement in regards to U.S. policy. Ending Daesh's territorial control was only one part in this struggle. The problem of returning foreign fighters and the potential emergence of an insurgency by Daesh members are more serious issues to deal with. It is not clear what kind of partnerships the U.S. will develop in order to deal with this current threat. The current Syria strategy needs to pay attention to this issue and start searching for ways to build alliances to deal with this problem in a long-term fashion. Furthermore, it is not clear how the U.S. foresees the geopolitics of the Middle East. From the current policy we can say that the U.S. does not want to leave Syria as an area under the Iranian zone of influence. In addition to the Iran strategy put forward by Secretary of State Mike Pompeo, President Trump is getting ready to convene a U.N. Security Council meeting in regards to Iran this month. Administration officials constantly emphasize their opposition against the expansion of the Iranian zone of influence. However in regards to Russia we don't see the same type of harmony within the administration. The rather hawkish discourses of Nikki Haley, the U.S. ambassador to the U.N., at the Security Council, contradicts the rather dovish approach of President Trump toward Russia.

It is definitely not clear how the U.S. sees Russia in Syria. On the one hand, the Russian influence in Syria seems necessary for reaching a political solution in the conflict. However on the other hand, Russia is considered as a major destabilizer in Syria. Especially the clash of words in regards to a potential chemical weapon attack demonstrated this problem.

President Trump did not only set the bar by emphasizing that the U.S. will be very angry but also insinuated a potential attack on the Syrian regime in case of an attack that would lead to civilian casualties. Moreover in Syria, we are not clear what the U.S. position is in regards to Assad. Obama's "Assad must go" turned into a vague position during his era. Although it was reported in a recent book by Bob Woodward that President Trump once asked the members of his administration if the U.S. can kill Assad, eventually the U.S. came to a point that is more nuanced. It was reported yesterday that the U.S. does not see Assad as someone that can contribute to the reconstruction of Syria, however it is not willing to be the party that will overthrow him. Thus it also means that there is a question mark in regards to the U.S. position toward Assad.

Thus, there are no determined sets of priorities in the U.S. policy in Syria. And there is no clear strategy, as well. For the first time, the U.S. is appointing civilians to talk about the reconstruction of Syria and seems to be more determined to find a political solution. However, actions will speak in the coming months. A potential Idlib operation and the U.S. reaction to it will display the real regional intentions of the U.S.