Turkey has made its decision 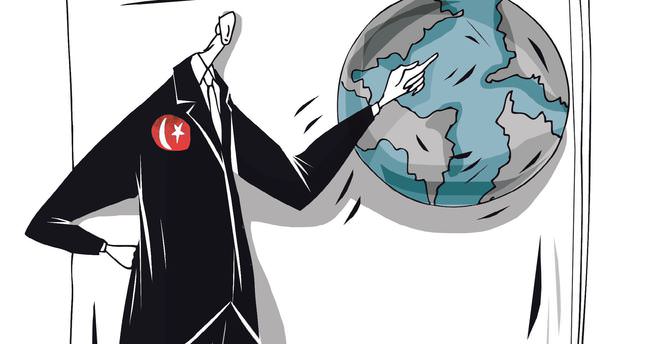 by Mahmut Övür Aug 14, 2014 12:00 am
Turkey's much-anticipated presidential election, which attracted considerable attention from the world, took place on Aug. 10, 2014, and yielded a first-round victory for Prime Minister Recep Tayyip Erdogan who won 51.7 percent of the vote to become the country's 12 thpresident. Sunday's election marked a historic event: For the first time in Turkey's history, the people directly elected their president, and despite objections from opposition ranks, ushered in an era of partisan presidents.

Meanwhile, the Republican People's Party (CHP) and the Nationalist Movement Party (MHP) joined forces with 12 other political parties of various ideological backgrounds to launch a joint campaign against the conservative democrat, the AK Party's Erdogan. Their candidate of choice was, interestingly enough, Ekmeleddin Ihsanoglu, the former secretary-general of the Organization of Islamic Cooperation (OIC), and a member of the Islamist/conservative political tradition. Again, for the first time ever, the Kurdish political movement fielded Selahattin Demirtas, a co-chairperson of the People's Democratic Party (HDP), to highlight their credentials as a crucial part of Turkey's politics.

Another historic aspect of the 2014 presidential vote was related to divorcing the presidential palace from its mission of keeping a lid on civilian politics on behalf of the bureaucratic state under a guardianship regime. In this sense, the election allowed the people to reunite with the state, reconciling the Republic with democracy. The development amounted to the most radical change of government in the country's 91-year history and therefore represented a final battle between the forces of the Old Turkey and the New Turkey - which was precisely why the opposition made such a significant effort on Sunday. Not only the 14-party coalition, but also various media outlets, big business and the Gülen Movement, which originates from the religious/conservative social base, united against the prime minister. The German media, among others, provided international support for the alliance. Consequently, Turkey witnessed a brief, yet intense and harsh campaign season.

Although the prime minister had been the front-runner throughout the race, he nonetheless traveled around the country to address the masses, attend important gatherings and provide ample content for the media corps. On the campaign trail, he repeatedly told the people that he intended to use his constitutional powers to the full extent of the law and attend to all of the nation's problems to signal his interest in serving as head of state as opposed to a ceremonial president. Meanwhile, Erdogan pledged to tackle pressing issues in line with his party's 2023 vision and promote greater freedom and growth to turn Turkey into one of the world's top 10 nations. Erdogan's vision document for the presidential election, in turn, set out the road map for proposed changes: to consolidate the country's democracy, to build a prosperous society and to secure Turkey's position as a pioneering country. At campaign events, the prime minister also stated that he would continue to support the Kurdish peace process, which seeks to peacefully resolve the Kurdish question through democratic means, and fight the Gülen Movement's shadow state.

The above points suggested that the presidential election would be at the heart of national politics. Surely enough, the opposition parties, which originally opposed the 2007 amendments that allowed the people to directly vote for the president, effectively accepted these terms by launching their campaign. As such, the event represented a turn to presidentialism or semi-presidential rule. Over the past 12 years, Prime Minister Erdogan and his AK Party had won eight consecutive elections. On Aug. 10, the frontrunner faced the crowds once again, and won a seemingly difficult election. Meanwhile, Erdogan's ability to win 51.7 percent of the vote empowered himself and his political party, as the low turnout (approximately 74 percent) led to ineffective criticism. The level of participation nonetheless remained considerably over EU member states, and the opposition parties did not account for the low turnout in all constituencies. A sizeable chunk of the AK Party base, in turn, did not go to the polls on Election Day either. Nonetheless, Recep Tayyip Erdogan, a veteran politician, became the country's 12th president to usher in a new era. On election night, the president-elect mentioned the need for a new social contract during his "balcony speech" and told millions of citizens that all groups should take a step to end political polarization in Turkey. It would appear that Erdogan will remain an influential figure in the country over the next decade.

The presidential election's second most popular contender was Ekmeleddin Ihsanoglu, who bridged the gap between Kemalists and Turkish nationalists, the rival siblings of the country's politics, to surprise a significant part of society by marking an interesting occasion for both political movements. First and foremost, the average citizen seriously questioned the reasoning behind the decision to nominate an outsider rather than one of the better-known opposition figures for president. As such, the joint presidential campaign, in particular endorsements from the old media and the Gülen Movement, represented a sequel to the "political siege" that Turkey witnessed prior to the local elections of March 30, 2014. The Ihsanoglu campaign could have nonetheless sought to develop a more aggressive and ambitious platform, but the opposition candidate's inability to set forth a political vision for the country and his commitment to the old and pro-establishment notion of the presidency alienated a sizeable chunk of the electorate.

More important, however, was the outdated campaign that Ihsanoglu ran in the age of media. Unwilling to comment on key issues such as the Kurdish question, the opposition candidate picked a 1970s-inspired motto, "Ekmeleddin for Bread," to render the joint effort uninspiring and ordinary. In this sense, the candidate won 38 percent of the vote and reached the maximum number of votes he could receive. It goes without saying that the leaders of both the CHP and the MHP, which have interpreted the transformation of Turkey and the world in an inaccurate manner, played a major role in Sunday's humiliating defeat. Just a few days after the vote, a number of pieces have been set in motion as the intra-party opposition within the CHP in particular engaged in public criticism of the leadership's policies and preferences. Considering the transformative role of the Aug.
10 presidential vote, the opposition parties in Turkey will inevitably have to follow suit.

Kurdish politics and the Demirtas campaign

Selahattin Demirtas, the HDP candidate, was without a doubt the most interesting figure in the presidential election and became the first Kurdish politician to run for the highest office in the land with a strong emphasis on his ethnic background. Moreover, Demirtas, along with Erdogan, dealt a serious blow to the old guard's taboo about a partisan president.

What really distinguished Demirtas from the rest of the candidates were his rhetoric and the broader significance of his presidential bid as a first attempt to implement his party's plans to appeal to the entire country, which was in line with PKK leader Abdullah Öcalan's proposals. The Kurdish peace process, which has largely brought an end to violence since December 2012, clearly facilitated this transition. The military wing of the Kurdish political movement had long planned to make this transition to no avail.

The presidential election presented a serious opportunity to the group when it coincided with the transformation of the Peace and Democracy Party (BDP), a Kurdish nationalist party, into the HDP, and Demirtas skillfully exploited his moment. Thus, the Kurdish political movement ran a campaign that was able to reach all groups with no categorical opposition to their agenda and that made it possible for Demirtas to receive 9.8 percent of the vote. Whether the success should be attributed to the Turkish left or the Kurdish immigrants living in metropolitan areas remains disputed, but what we know is that the Demirtas campaign built strong ties with the public. As such, certain constituencies in Western provinces, who hate the BDP/HDP due to the PKK's violent activities and keep a safe distance from the Kurdish peace process, encountered a different kind of Kurdish politician over the past weeks. It remains to be seen, however, whether Demirtas and his party will be able to take their achievements to the next level. But if they succeed in their efforts, it is safe to say that the Kurdish political movement will be a serious contender to lead the opposition camp in Turkey.

In conclusion, the 2014 presidential election in the country has highlighted the role of two pro-change social groups, the religious conservatives and the Kurds, on the road to the New Turkey. The Kurdish peace process brought the two groups closer on the basis of democracy, equality and the new Constitution. This, in turn, will compel the establishment parties across the political spectrum to change and adapt to new circumstances.