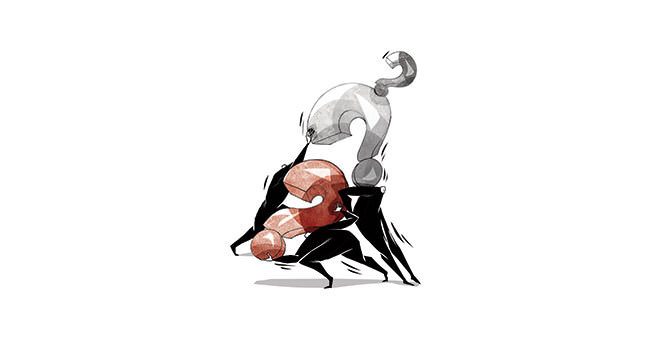 2014 was a difficult year for Turkey, and the last couple of years have been trying for the AK Party with serious challenges including several coup attempts. The upcoming election is crucial for the party since it will set the tone of the next five years and determine its position

Both 2013 and the newly-expired 2014 were difficult years. We have undergone a period of successive events beginning with the Gezi Park protests; continuing with the Dec. 17 and Dec. 25 coup attempt operations; the violent protests in the Kurdish regions on Oct. 6-7, 2014 under the pretext of supporting those fighting against the siege of Kobani, Syria, and the most recent unrest in Cizre. The goal of all of this was to topple the government and prevent the resolution of the century-old Kurdish problem. Under the political leadership of President Recep Tayyip Erdoğan, Turkish society has responded strongly to all sieges and traps set for politics with the local and presidential elections in 2014. We have entered 2015 with this political background. 2015 will also be a difficult year, but perhaps not as difficult as the last two years. The peace process is still on a knife's edge.

April will mark the centenary of the Armenian events of 1915. For this reason, the siege carried out over the last two years especially through the press in the U.S. and Germany will become still tighter. President Bashar Assad's atrocities in Syria continue unabated and Turkey's relations with the West are not in good shape. There are also positive aspects despite all these problems. Most importantly, there is a political power that has seen off multi-faceted and intense sieges during the last two years, which takes its strength from the people and gives confidence to the people. There has been a rejuvenation of relations with Iraq and Russia, with Turkey becoming an energy corridor and maintainer of political and economic stability.

The most critical threshold among all these positive and negative developments is the general elections due to be held in June 2015. These elections are an extension of the local and presidential elections. In this sense, they will be the last showdown between pro-change domestic forces and foreign-supported tutelary forces of the old Turkey. The Justice and Development Party (AK Party) represents the first block. The axis of the opposition Republican People's Party (CHP), Nationalist Movement Party (MHP) and the Gülen Movement represents the second block. The Peoples' Democratic Party (HDP) and PKK line, which emerged as a Kurdish political movement, has a chance to constitute a "third way," but the situation is not yet clear. The stance taken by this political line will ensure its clarification.

Looking at this political picture, the current positions of political parties indicate, even without the need for opinion polls, that the outcome of the 2015 elections will not be different from those of previous elections. This is because opposition parties, particularly the CHP, have lost not only the last two elections, but every election in the last 13 years. And in spite of these defeats, they have neither learned from their mistakes nor put forth a new political strategy. In light of this analysis, let's take a closer look now at the parties that will be in the 2015 elections.

The AK Party will enter the race with a new leader after 13 years of rule. Prime Minister Ahmet Davutoğlu has managed to carry out intensive work in his first four months and impressed everyone with his academic performance, despite negative criticism and expectations. He has not allowed a political vacuum to be created. He has reinvigorated his party through provincial and district congresses, and revitalized his government through economic reforms and a judicial package, indicating that he will keep moving forward. Thus he has disappointed those expecting him to fall out with Erdoğan, the natural leader of his party.

As a consequence, the AK Party seems to be the only party that is completely ready for the elections. It enjoys the backing of its natural leader and Erdoğan's political experience and performance as an active president. In particular, the party's unwavering support for the resolution process that gives people hope, and its determination to resolutely continue the fight against the "parallel structure" within the limits of the law, motivates party cadres who were expected to be tired. This shows that the AK Party is by far the biggest favorite in the upcoming elections.

The current condition of the main opposition CHP is far worse than it was during both the March 30, 2014 local elections and the Aug. 10 presidential election. Now they neither have the illegal wiretap recordings provided by members of the Gülen Movement nor political actors like Ekmeleddin İhsanoğlu, Mustafa Sarıgül or Mansur Yavaş to put forward as "new," nor a 14-party alliance including big and small parties. Moreover, the number of those leaving the CHP is increasing steadily. Emine Ülker Tarhan resigned from the CHP and founded a new political party, Süheyl Batum was expelled and Birgül Ayman Güler is next in line for expulsion. But the most interesting of all is the possibility of the expulsion of Mustafa Sarıgül, who returned to the party amid huge fanfare. Sarıgül's men have already begun to resign from the party. It would take a miracle for this CHP to match its previous election performances. Therefore, the CHP will consider "leading the opposition" a success in these elections.

MHP willing to hold its own

The MHP is not in a different situation, either. It cannot adapt to the spirit of the times, partly because of its nationalist nature. Particularly, the party cannot figure out how to regard the century-old Kurdish problem that has reached the settlement stage, and has trouble producing new policies. It neither supports the process nor strongly opposes it. Since it placed its hopes in a possible failure of the resolution process, it cannot go beyond opposition to the AK Party. A similar impasse appears in relation to the "parallel structure," which has set a trap for some party members in the past. This shows that the MHP will not play much of a role.

For the MHP, maintaining its votes would be a success in and of itself.

Can the HDP be a surprise in the 2015 elections?

Without doubt, the HDP looks poised to be the greatest surprise in the 2015 elections. A historic opportunity now lies before it. For the HDP to formally run in the elections as a political party and pass the ten-percent threshold, the settlement process should be kept on track.The presence of extremist elements in the areas they are still active, which lay waste to the streets and involve in killings as seen in Cizre, reduces this chance. As long as street events continue, it will be very difficult for the HDP to get more than ten percent of the vote. If the situation changes and violence subsides as jailed PKK leader Abdullah Öcalan envisages, it should come as no surprise when the HDP performs another democratic miracle.

There is also a dimension of risk in addition to the possibility of a miracle. The probability of the ten-percent election threshold being lowered cannot be ruled out. But many politicians lean toward the idea that this political movement that plans to assume an active role in shaping the future of Turkey should take this risk, even if the threshold remains unchanged because it will be a sincerity test for the PKK and HDP's intention to solve problems through politics, and a measure of its pretense to alternative politics. Of course, we should also consider what kind of picture will emerge if the party cannot pass the threshold. For this reason, a last-minute decision to enter the elections with independent candidates for the last time may be made. As you see, the test of civilian politics for Kurdish politicians does not look easy.

Obviously, the list of political parties in the 2015 elections does not include only these four parties. There are many parties in Turkey and some of them will take part in the elections. Apart from established small parties like the Grand Unity Party (BBP), Democratic Left Party (DSP) and Felicity Party (Saadet), a few newly-established small parties' participation is awaited with impatience. People are especially curious about the performances of the CHP defector, Emine Ülker Tarhan's party, and AK Party defectors İdris Bal and İdris Naim Şahin's parties. No one actually expects a surprise. Having failed to cause excitement upon their establishment, these parties will not bring about change in the elections, in which huge issues like economic stability, the Kurdish problem, the parallel structure and the new constitution will stand out.