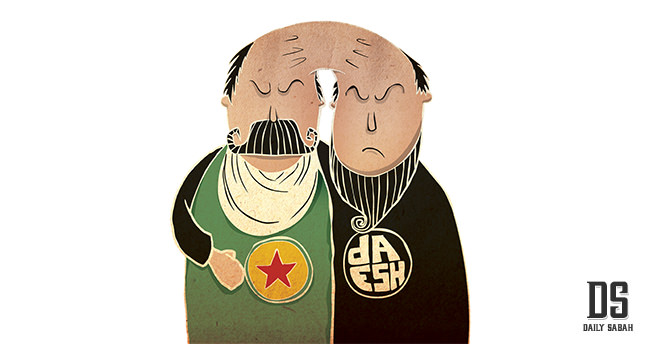 The more the government visibly declares its desire for a peace environment, the more the PKK and its political affiliate HDP engage in a strategy of violence

The Kurdish reconciliation process was one of the most exciting efforts to peacefully resolve the Kurdish question over the past century. Overjoyed at the prospect of peace, the Turkish people showed enormous support for the disarmament talks. Others, deeply unsettled, did everything in their power to derail the negotiations. Ironically, no group inflicted as much damage to the talks as the PKK leadership and the Peoples' Democratic Party (HDP), both of which were directly involved in the negotiations.

The Kurdish political movement engaged in similar tactics in the past, and each time it attempted to get away with murder by blaming the government. This time, however, was different. The Turkish state has visibly changed and Turkey's leaders are much more powerful than their predecessors.

In an effort to conceal what really happened, HDP representatives and self-proclaimed leftist intellectuals have been repeating the same lies on TV, that the government failed to keep its promises and President Recep Tayyip Erdoğan derailed the disarmament talks.

Here is the response from Justice and Development Party (AK Party) deputy Adnan Boynukara, who followed the talks closely as a senior government official:

"There were two turning points. On May 8, 2013, the PKK leadership suspended their withdrawal from Turkey when global powers and the [Bashar] Assad regime granted them some local authority in Syria. Turkey continued the talks [despite the suspension]. [The second challenge] was what happened after the PKK leadership on Feb. 28, 2015 called on militants to stop using arms against the Republic of Turkey."

Let's talk about what happened on Feb. 28, 2015, which the PKK leadership and their political wing claim derailed the negotiations.

Twenty minutes after the historic announcement, HDP Co-Chair Selahattin Demirtaş argued that "the government's policies give no hope and don't come close to peace." The same day, Kurdish Communities Union (KCK) executive Mustafa Karasu called on the authorities to allow them to communicate with imprisoned PKK leader Abdullah Öcalan "if they mean business." The idea that the PKK will hold a congress to disarm is sheer demagogy, Karasu had said.

Boynukara provides a summary of how the PKK leadership slowly turned their backs on disarmament:

On March 5, 2015, Cemil Bayık said: "The solution will come first and weapons will be laid down later."

On March 11, 2015, Cemil Bayık and Bese Hozat said: "Statements about the PKK's disarmament is the AK Party's election propaganda."

Bayık continued: "We will hold a congress when we please. But we won't make that decision until the leadership [Öcalan] himself meets with the guerrillas."

For months, it was clear that the PKK was looking for an excuse to back out of the agreement.

Now let us go back to May 2013. Here is what Demirtaş told Radikal newspaper about the PKK's refusal to withdraw from Turkey:

Noting that people in the Qandil Mountains used the construction of military outposts, military dams and highways, Demirtaş said: "These discussions triggered a debate on Qandil over slowing down the withdrawal. We told the government about this situation. During the same period, the Gezi resistance took place and the government's response to young people at Gezi [Park] fueled distrust on the Kurdish side."

At last, the PKK leadership had spoken. Demirtaş continued: "To be honest, Qandil had already slowed down the withdrawal before Öcalan warned them [about Gezi Park]. Later, Öcalan said that the withdrawal cannot continue under the circumstances to consolidate Qandil's position."