Why is the US disturbed by Turkey's offensive in Afrin? 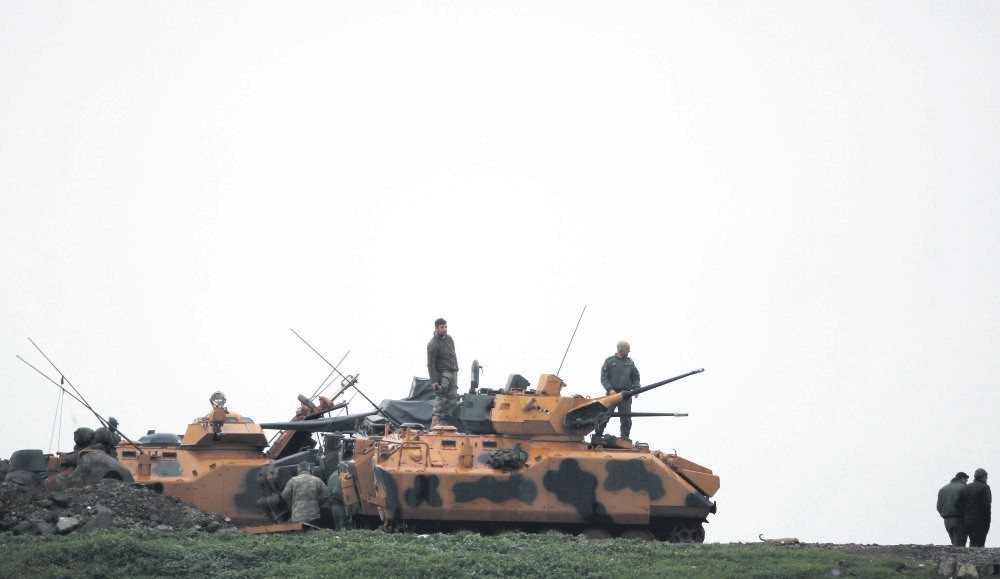 The U.S. is well aware that Syrian Kurds will breathe a sigh of relief with the accomplishment of Turkey's counterterrorism operation, which is why it tries to hamper the offensive

We can see that Turkey's Operation Olive Branch in Afrin has already been a game-changing move for the whole region. With the Turkish offensive, all actors, including the U.S., Russian, Iran and the Bashar Assad regime are trying to determine their positions. In the meantime, the PKK and its Syrian affiliate Democratic Union Party (PYD) and its People's Protection Units (YPG) forces have been caught in desperation. There is also another bloody terrorist group, Daesh. While conducting the operation, Turkey is doing its best not to harm any civilians in Syrian cities. However, some Western-oriented media outlets try to portray Turkey as if it is waging war on Kurds.

Besides all this, Turkey is aware that there is a Kurdish problem in Syria, and it also knows well that global or regional powers do not care about Kurds or their interests. However, there are some circles that consider Turkey, which is currently in Syria to help regional Kurds, to be the sole obstacle. They are using the outlawed PKK as an instrument. The U.S. is now doing the same thing by hampering Turkey's Operation Olive Branch. We see this most clearly in the dirty propaganda carried out by the mainstream U.S. media, which has been maintaining an incredible campaign of hostility against Turkey. Of course, PKK supporters and Zionist lobbies in the U.S. also contribute to this, but the main determinant is the media, which clings to the trajectory of the U.S. "deep state."

One of them is journalist David Ignatius. We know him from a panel discussion where President Recep Tayyip Erdoğan, then serving as prime minister, chastised then Israeli President Shimon Peres on Gaza at the Davos World Economic Forum in 2009. Recently, Ignatius has been writing vitriolic pieces against Turkey.

Last week, Ignatius wrote an opinion on Turkish-U.S. relations in The Washington Post. It is obvious that he does not want positive relations between the two countries when he starts the piece with a monstrous lie: "How bizarre that the biggest obstacle to finishing the war against the Islamic State [also known as Daesh] and beginning the stabilization of Syria is America's supposed friend and NATO ally, Turkey."And what is really bizarre is Americans think they are smart. Even the most experienced authors lie through their teeth to the world. Leaving aside what Turkey says, Britain's state broadcaster BBC showed lies about Daesh a while ago. However, for whatever reason, Ignatius has not mentioned it.

He continues to lie: "Certainly, American and Turkish interests should converge; but if so, why does Turkey imprison American citizens, accuse Washington of fomenting a coup, and violate U.S. sanctions against Iran?" How to correct this argument? Let us just ask experienced investigative journalist Ignatius: Do the CIA and the U.S. Central Command (CENTCOM) use Gülenist Terror Group's (FETÖ) putschist ringleader Fetullah Gülen, who lives in Pennsylvania, or not? Let us get down to the key point now. Ignatius gave the first sign that the Assad regime is embracing the PYD – which has been on the agenda. He did this speaking highly of the Syrian military: "The path out is a steady, patient advance of the faltering Geneva negotiations to extend the power and authority of a reformed Syrian state and military. For the U.S., that means biting the bullet and working with Russia and the Syrian regime – two untrustworthy but essential partners."

Who would have thought this could happen? The U.S. is blatantly trifling with Turkey, joining hands with its two arch enemies, Russia and Syria, and embracing the PKK, which it recognizes as a terrorist organization. Why is it doing all this? The secret is that the U.S. considers Turkey to be an obstacle to its fragmentation of the region through a policy of divide and rule. Turkey wants them to resolve the problems of countries in the region, including the Kurdish issue, on a democratic basis, which does not serve the purpose of either the U.S. or Russia.What will happen next? Ankara is not in a bad mood at all. The global powers pushing Syria into play will not change the consequences. Turkey will continue its commitment against those who collaborate with terrorists. Foreign Minister Mevlüt Çavuşoğlu put forth Ankara's attitude in a nutshell: "Our goal is to clear Afrin of terrorists. If the regime enters to protect the PKK and YPG, no one can stop the Turkish troops."