Within the main opposition, a private battle within the war 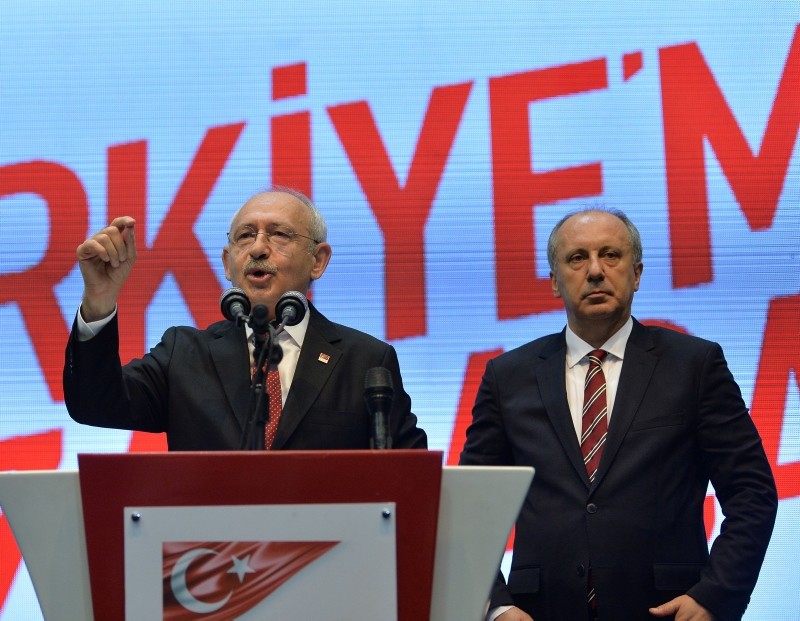 There was a lot of hype ahead of the announcement of parliamentary candidates by the Justice and Development Party (AK Party) and the Republican People's Party (CHP) earlier this week. Indeed, both lists were full of surprises.

The AK Party made headlines by fielding several Cabinet members as parliamentary candidates and dismissing half of its current caucus. The CHP, in turn, came under fire for effectively ending the careers of many left-wing and neo-Kemalist politicians. To be clear, the first development was expected by many commentators, whereas the main opposition party's decision was surprising and shocking. The popular assumption was that the ruling party would seek to renew itself in order to stay in power and the opposition would try to attract as many people as possible.

Obviously, the CHP leadership did the complete opposite and sent shockwaves throughout the party organization. A midnight "raid" of the CHP headquarters by their own presidential candidate, Muharrem İnce, who proceeded to get into a heated argument with Deputy Chairman Bülent Tezcan, alone was a huge scandal. Perhaps he was able to make some minor last-minute changes to the main opposition party's candidate list.

But there is a much bigger problem plaguing the CHP nowadays. What happened earlier this week was not just a simple reshuffle of senior party members but part of a political engineering effort. First, let's just see who left and who stayed: Those who were dismissed included members of the CHP's "left wing," i.e. Ilhan Cihaner, Fikri Sağlar, Mustafa Balbay and Zeynep Altıok, as well neo-Kemalists and allies of Mr. Ince, such as Haluk Pekşen and Namık Havutçu. A notable exception was Eren Erdem, a controversial first-term parliamentarian with alleged links to FETÖ, who is currently forbidden from leaving the country pending trial.

Simply put, the main opposition party kicked out the vast majority of leftist and neo-Kemalist figures. The fact that a handful of hardcore leftists, such as Aykut Erdoğdu and Tuncay Özkan, survived the purge doesn't change the fact that the CHP leadership made some very serious decisions. Although members of Chairman Kemal Kılıçdaroğlu's inner circle have been blamed for what happened, it was the CHP leader himself who signed off on those decisions.

Perhaps as his final act in national politics, Mr. Kılıçdaroğlu took a series of steps that could lead to his party's destruction. Every single name on the CHP's candidate list was an act of political engineering. Ironically, the CHP chairman had no problem firing countless leftists but dared to nominate Sera Kadıgil – who is best known in Turkey for tweeting that she would root for Syrian dictator Bashar Assad if he ever went to war against the Turks. The CHP list also includes Abdüllatif Şener, a former AK Party lawmaker. Simply put, the whole thing is a hot mess.

So why go there? In recent months, I warned that Mr. Kılıçdaroğlu's brand of politics will play into the hands of Meral Akşener's Good Party (İP) and the Peoples' Democratic Party (HDP). The main opposition party's candidate list supported my assessment. There is no other way to account for the CHP leadership's strategy but to conclude that they wanted neo-Kemalists to support Mrs. Akşener and leftists to rally behind the HDP.

Here's how a long-time CHP member responded to his party's decision, "For Mr. Kılıçdaroğlu, it doesn't matter whether the CHP receives 25 percent of the vote or more. What matters is to stop the AK Party, which he knows he and his party cannot do. So he chooses to sacrifice the CHP in order to clear the path for the Good Party and the HDP."

I am not sure how the individuals that Mr. Kılıçdaroğlu sacked feel about their party's strategy. Looking at the candidate list, however, it would not be a surprise if the CHP won less than 20 percent in the June 24 parliamentary elections.

Under the circumstances, the future does not exactly look bright for Muharrem İnce either. In addition to losing all his influence over the CHP, the main opposition party's presidential candidate will end up going down in history as the man who ran for president because he failed to become the CHP's chairman – twice.