The background to the exchange rate manipulations 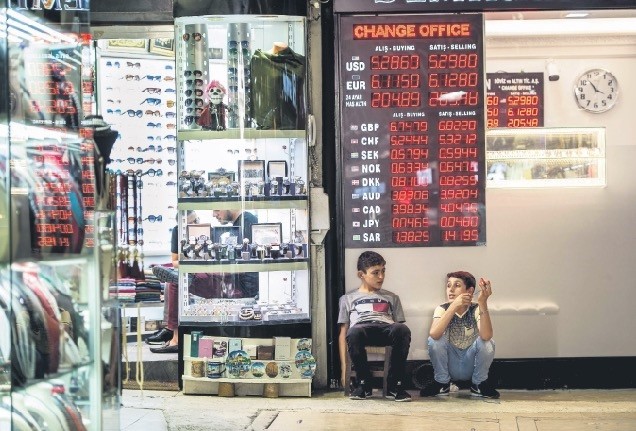 Two boys sit in front of an exchange office in Istanbul at a time when the Turkish lira is rapidly losing value against the U.S. dollar, Aug. 8.
by Mahmut Övür Aug 14, 2018 12:00 am

After the fake corruption cases of 2013 and the bloody coup attempt in 2016, Turkey is now facing a major manipulated attack on its currency

Nowadays, Turkey-U.S. relations are experiencing their deepest crisis ever. The current economic warfare declared by U.S. President Donald Trump on the pretext of the evangelical pastor Andrew Brunson is the continuation of Washington's anti-Turkey policies.

Since the Dec. 17 and Dec. 25 judicial coup attempts by the Gülenist Terror Group (FETÖ) in 2013, the U.S. has sided with anti-Turkey groups, i.e. terrorist groups such as FETÖ – the perpetrator of the bloody coup attempt in 2016 – and the PKK and its Syrian offshoot, the Democratic Union Party (PYD).

Especially the U.S. media, along with mainstream Western media, have been deliberately prompting anti-Turkish and anti-Erdoğan sentiments for the last few years. This is not because of the mistakes or the shortcomings of the Justice and Development Party (AK Party) government, but because of global and regional interests of imperialism.

Serious constraints have been imposed on Turkey since the country raised its voice against their imperialist interests. They are now trying to corner Turkey through currency exchange manipulations. We clearly saw that all these attempts are interrelated global attacks in the case of the July 15 coup attempt.

The recent crisis in exchange rates did not appear out of the blue but has a certain background. It is known that pastor Brunson, claimed to be the root cause of the crisis with the U.S. and accordingly the decrease of Turkish lira's value, is not the real cause of Trump's tweets and U.S. Vice President Mike Pence's threats against Turkey. Of course, that case is a notable argument in terms of domestic policies. But it is obvious that the underlying motivation is to settle accounts with Turkey. And this is the continuity of the same war through the economy.

As President Recep Tayyip Erdoğan stated many times, we are in serious economic warfare. Unfortunately, some groups are pleased with this grim picture just like the ones who applauded the coup attempts in the past. As I was penning the article, I remembered the famous words of late Prime Minister Bülent Ecevit in 1978 after the Cyprus operation.

"Turkey was left alone by its allies… The absence of loyalty is coming from our NATO allies. If the negative approach of the U.S. continues, we have to adapt ourselves to the changing facts and situations. We have to take care of ourselves," Ecevit had said at the time.

Of course, Turkey had some advantages back then due to the Cold War, but the country also enjoys considerable advantages today. A new global order is about to be established and the U.S. is getting more and more isolated as various countries develop new partnerships. Besides, for the first time, Turkey has gotten the opportunity to recover from the imperialist siege that has constantly created new coups and threats ever since the late İsmet İnönü signed the Marshall Plan in 1947.

Moreover, the exchange manipulation also presents Turkey the opportunity of being liberated from dependence on import activities, a problem that could not be resolved for years. Every citizen has a duty at this point. As we – as the Turkish nation – did in the July 15 coup attempt, we can overcome this economic attack only if we unite and resist together.