A guide to Turkey's struggle for democracy 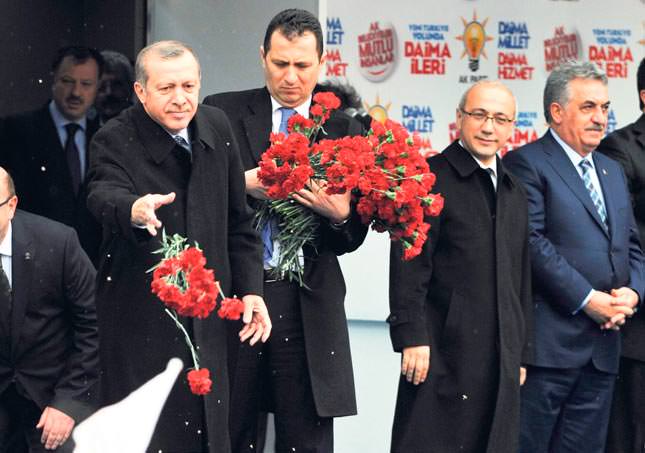 by Markar Esayan Mar 04, 2014 12:00 am
Although the bloc against the AK Party changes from time to time, the strategy never does.

Polarization in Turkey has been the most popular theme over the last 12 years. There is a general perception that it has been the deliberate political preference and procedure of the AK Party's charismatic and successful leader, Prime Minister Erdogan, as if the political atmosphere prior to the AK Party's election in November 2002 was any different.

With the Dec. 17 operation the country once again found itself in a time of distress, or more correctly, falling deeper into an existing tension. Of course, Erdogan and the AK Party make political errors, but unfortunately the issue is not the errors themselves. Had it been so, we would have witnessed the emergence of an influential opposition just as the country would have benefitted from it too.

The essential theme of the past 12 years is the marketing of political engineering as "opposition," where we see non-political, dirty moves being portrayed as politics. The mainstream media has taken on the task of portraying these moves as a coup attempt and painting a picture for the foreign and domestic public of political interference.

The goal of the operation then was to reach the AK Party, mainly by dissolving the public's support of Prime Minister Erdogan and his reputation in the name of justice within judicial boundaries. This theme never changes. The Gülen and mainstream media alliance is exercising power over the public by expecting us to accept a charge that is still merely an allegation thrown at a legitimate government.

If we completely disregard the parallel structure aggregated within the judiciary and police force, or leave out the anomalies of the operation's irregularities, all that is left is merely a police record. The notion of innocence fades with the attempt to overthrow a government by creating the perception of a finalized and concluded case that confirms the AK Party's involvement in corruption.

Since Nov. 3, 2002, all political debate has been misappropriated with the sole intention of overthrowing the elected government. This is a great predicament for the opposition, because the status quo, the capital and the media trust themselves fully in playing politics outside of the ballot box, which is what happened with the Republican People's Party (CHP) before the June 12, 2011 elections. Party President Deniz Baykal and his supposedly powerful staff lost the party before they even knew what had happened.

This change may have pleased us had it been done through democratic measures. How did it happen? Baykal's illegal sex tapes were leaked to the Internet and the party had to reorganize. This is what they are trying to do to remove the AK Party from Erdogan's grasp, but Erdogan is not Baykal and the AK Party is not the CHP.

We are expected to believe that the use of the judiciary for anti-democratic political interference with the Dec. 17 operations, the leaking of the blackmail tapes and the surfacing of thousands of wiretapping cases are merely an investigation into corruption. This mocks the experience and intelligence of the Turkish people.

A country still under democratic rule, Turkey's complexities may be difficult for the Western world to comprehend. Surely, a parallel structure infiltrating the intelligence, police and court systems and attempting to institute a coup by collaborating with the opposition bloc would never happen in the U.S. or any European country. And the measures taken by a resistant government would hence not be this urgent.

However, if our Western friends take a minute and look back at their own history when democracy was formalized, they would see similar patterns in the struggle of legitimate politics against anti-democratic assaults. An eclectic approach to the matter is unfortunately not sufficient in trying to explain everything.