Discrepancies will undermine the PKK and HDP 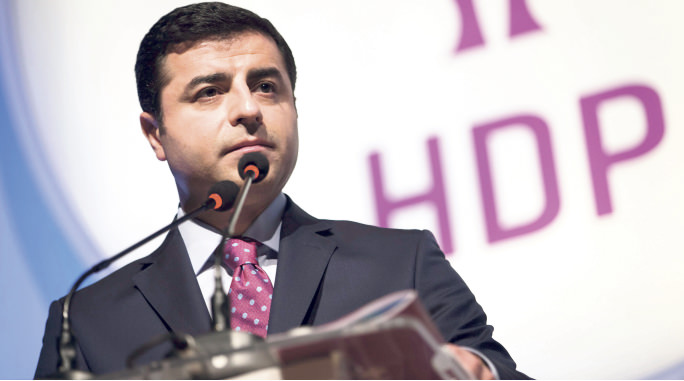 The HDP is seeking to take advantage of the positive winds of the reconciliation process and aims to pass the election threshold. But its affiliation with the PKK casts doubts on the party's integrity

Momentum is picking up in Turkey's colorful election marathon. And just like a marathon, the course is long, but it is almost certain that four parties will enter Parliament after June 7. The Justice and Development Party (AK Party) is still in power and is also the favorite to win. The main opposition Republican People's Party (CHP) is coming in second with around 25 percent of predicted votes while the Nationalist Movement Party (MHP) trails with 15 percent of the potential vote and the Peoples' Democratic Party (HDP), which is known for its affiliation with the PKK, is aspiring to pass the 10 percent election threshold, pushed along by the positive winds of the reconciliation process. According to the latest estimations, its hopes lie on a knife's edge, with its votes oscillating between 8.5 percent and 9 percent.

The current condition of the HDP is noteworthy. Even though the HDP argues that passing the threshold would change the profile of Parliament and profoundly influence the country's politics, reality does not corroborate this view. In the past, the HDP used to compete in elections with independent candidates, who then used to form the HDP's group in Parliament. An article presented as part of the AK Party's democratization package on Sept. 30, 2013 suggested lowering or abolishing the threshold, which was ignored by both the HDP and the other parties. But if that proposal had received serious attention, it would have been passed by the time elections were held. Unfortunately, the HDP and other opposition parties would rather dream up negative policies and preserve their strength by spitting in the wind.

But the most critical problem of the HDP is the fact that it has not detached itself from the PKK and its armed forces. So far, it has not acted in a way that might have convinced the public to view the HDP's presence in Parliament in a positive light. In the beginning, we had great expectations for the HDP, and so we gave them the benefit of the doubt. A revolutionary negotiation process commenced on Jan. 3, 2013. While the government began negotiating with the imprisoned PKK leader Abdullah Öcalan through several state institutions, a delegation from the HDP accompanied those negotiations and contacted PKK units based in Europe and the Qandil Mountains in Iraq, where the headquarters of the PKK is located.Previously, this issue had been seriously taboo due to the 35 years of conflict and 40,000 casualties. But now Turkey was able to take this radical step thanks to the AK Party and its influential leader, Recep Tayyip Erdoğan's will. It is difficult for a political party that relies on popular votes every four years to take over a negotiation process that might go on indefinitely. However, the public's trust in Erdoğan facilitated such an opportunity. Leyla Zana, a legendary Kurdish politician who was in prison for years, but rejects armed conflict, was correct when she said in 2012 that only a socially influential leader like Erdoğan could resolve this issue.

Instead of following Zana's path, the HDP chose to coordinate with the ideologically contradicting parties that actually created this issue, and adopted hostile policies against the AK Party. Unfortunately, it called on its supporters to pour onto the streets in October last year. As a result, dozens of cities suffered violent clashes with the unrest leading to the deaths of some 52 citizens. However, only a few months before, in August 2014, HDP Co-Chair Selahattin Demirtaş (below) joined the presidential election as one of the three candidates and received 9.7 percent of vote. This happened thanks to the positive atmosphere introduced by the reconciliation process. Before the AK Party period, promoting Kurdish identity and even speaking Kurdish were forbidden. And no one could have imagined a Kurd having the chance to become president of Turkey.

But unfortunately, the HDP has not been as successful as we had all hoped in the PKK laying down arms and employing politics as a new form of combat. Today, in eastern and southeastern Turkey, AK Party cadres preparing for the elections are threatened with death and buses and election offices are attacked. However, at the same time in the western regions, it attempts to give a lesson in democracy to the AK Party. Such two-faced behavior raises concerns that the HDP and PKK leadership are following a certain strategy and manipulating the reconciliation process. But this inconsistency can only hinder the HDP in passing the threshold. And even worse, no one would feel the HDP's absence unless it enters Parliament. In any case, Turkey will make a choice and continue on its path. The violence and the Kemalist period have come to an end in Turkey. Those adjusting to this change are rejuvenated by public support. Other actors must simply change or disappear.
RELATED TOPICS