The change in Turkey is not tactical 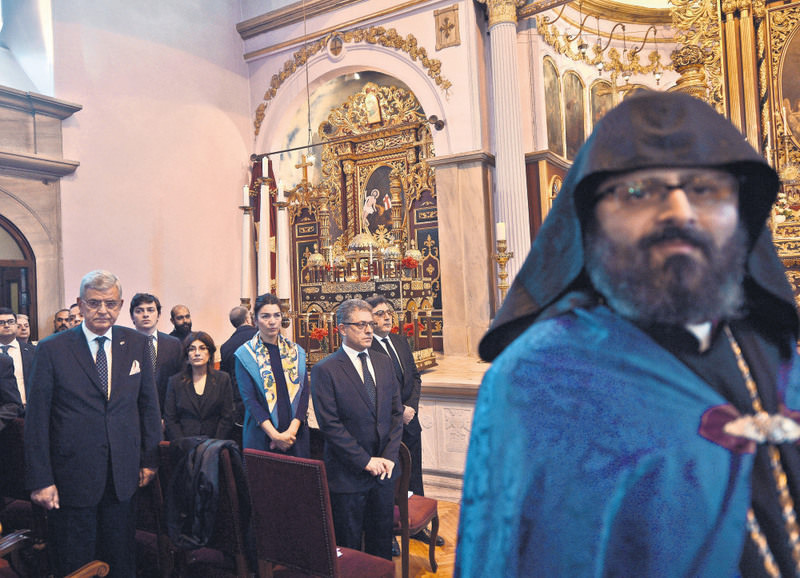 On April 24, Armenian-Turks commemorated their losses suffered during the 1915 deportation with an official ceremony at the Armenian Patriarchate of Istanbul for the first time in 100 years. Actually, between the years of 1918 and 1922, after the Unionists that were in charge of the 1915 incidents fled the country, commemorations were held at the Armenian cemetery located in Elmadağı for a few years. A monument was even erected there. At the Divine Liturgies held on April 24 with the participation of Muslim religious officers and state officials, the losses of Ottoman Armenian subjects used to be commemorated.

After Mustafa Kemal Atatürk consolidated his authority and introduced the monotypic 1924 constitution by abolishing the 1921 constitution, the ideological line of the new Republic was sketched. A type of B-team Unionist stance was adopted. While the Unionists who did not obey Atatürk were being discharged, alliances were made with those who followed his orders. As such the denial process of 1915 became official.

Within the last 13 years, we have been witnessing a dismissal of Unionist ideology thanks to the Justice and Development Party (AK Party) and President Recep Tayyip Erdoğan. The monotypic, discriminatory and even racist state ideology is evolving into a pluralist and democratic social discourse. With the AK Party government, Armenians and other communities with different beliefs have finally found the peace and respect that was absent for a century. Also, the denial policies regarding 1915 were ended by Erdoğan with the official condolence messages he issued last year and this year.

The EU minister and Istanbul's deputy mufti were also present at the Divine Liturgy held on April 24. At the ceremony, a historic letter issued by Erdoğan was read. The letter said:

"On this day that carries a special significance for our Armenian citizens, I once again respectfully commemorate all the Ottoman Armenians who lost their lives amid the conditions of World War I and extend my condolences to their children and grandchildren.

"I fondly recall all the memories, engraved all across these lands, of the Armenian community, whose economic, social, cultural and political contributions, both to the Ottoman Empire and the Republic of Turkey, will always be remembered with appreciation.

"Taking this opportunity, I also extend my best wishes for the recovery of Archbishop Mesrob Mutafyan, who is undergoing treatment for an illness.

"My distinguished Armenian citizens, let me reiterate that we are cognizant of the sorrowful events experienced in the past by the Armenian community and that I sincerely share your pain.

"Please rest assured also that our hearts remain wide open to the grandchildren of the Ottoman Armenians all around the world.

"With heartfelt salutations, I extend my best regards and wishes."

If we do not linger on the "G"-word, this is a historic step indicating that Unionist denial in Turkey has come to an end. This is a development a century in the coming, which will help us recover. It must be noted that not approving of the word genocide and totally rejecting the events of 1915 are quite different positions.

The Armenian diaspora must realize that Turkey's stance regarding 1915 has changed and form a renewed policy toward Turkey concomitant to this change. It is highly probable that three Armenian deputy candidates will enter Parliament after the June 7 elections. The word "Armenian" and Armenian identity, which was used as an insult until recently, is now being rediscovered by millions and acquiring a positive connotation.

If the Armenian diaspora regards this change in Turkey as a tactical move, it might soon find itself in a speculative and ahistorical position. Of course, it is not right to categorize the entire Armenian diaspora; I am only addressing those with such inclinations.

Today, we can negotiate about anything with the government, conduct any kind of activity in Turkey and establish various recovery mechanisms. It may be hard to adapt to this new situation, but it is not impossible.
RELATED TOPICS