Egypt and Turkey: A bitter and a good example 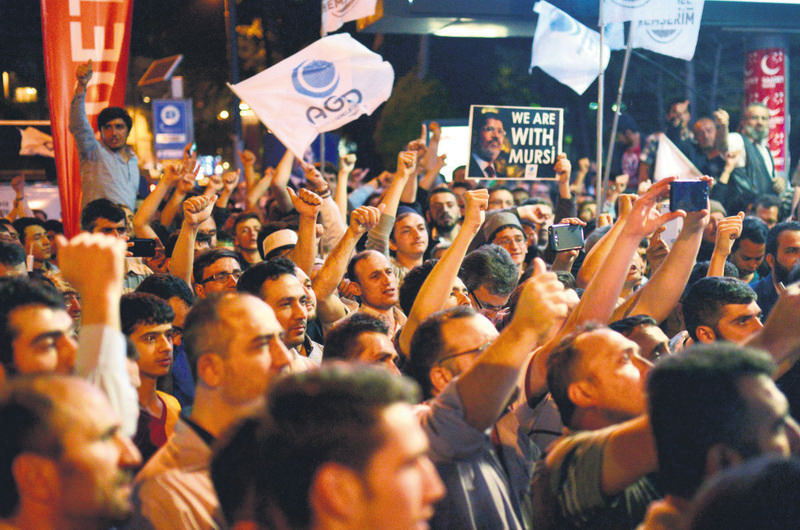 Protestors hold pictures of ousted Egyptian President Morsi and they shout slogans during a pro-Morsi rally in front of the Egyptian consulate in Istanbul.
by Markar Esayan May 22, 2015 12:00 am

In a world where the Aegean and Mediterranean Seas have become graveyards for helpless refugees and the Syrian dictator kills 300,000 people with chemical weapons, none of us can be safe

The European Union expressed its disapproval of the death penalty given to Mohammed Morsi, the first democratically-elected president of Egypt who was overthrown in a military coup. This is not a joke. The announcement is as follows. Federica Mogherini, the high representative of the EU for foreign affairs and security policy, said: "The court decision to seek the death penalty for former President Mohammed Morsi and more than 100 of his supporters, in connection with a mass jail break in 2011, was taken at the end of a mass trial that was not in line with Egypt's obligations under international law. The Egyptian judicial authorities have the responsibility to ensure, in line with international standards, defendants' rights to a fair trial and proper and independent investigations." She went on with a groundbreaking and harsh statement: "As the EU, we are confident the sentence will be revised during the appeals process. Stability and rule of law should be guaranteed."

Let's remember that Mogherini's spokeswoman, Catherine Ray, said they noted the 20-year sentence Morsi was handed last month in another trial and announced that their strong and stable relations with the Egyptian government would continue. A dictator ruling for 40 years was overthrown as a result of peaceful demonstrations in the country. The Egyptian public organized its first constitution and elected their president for the first time. After this process, which barely lasted 11 months, the country was intervened in and Morsi was overthrown by Gen. Abdel-Fattah el-Sissi, the current president, in company of massacres and snipers.

The coup was legitimized by exaggerating Morsi's mistakes. The Egyptian bureaucracy that was bound to Hosni Mubarak entrapped Morsi. Aid was cut. Garbage was not collected and lines for oil formed. While the Muslim Brotherhood's adaptation to politics was going to be a great initiative for Egypt and the Middle East, Islamists' coming to the forefront of the political scene, particularly Morsi's close stance to Hamas, was regarded as a threat. However, such a change might have introduced peace to the Middle East in the medium and long terms.

Europe and the U.S. feel more close to elites in the region who seem "more secular." Israel's security is attempted to be assured by controlling the public by means of dictator-like Sissi in a considerable country such as Egypt. In this case, even though Sissi exerts the most violent methods, he is regarded as harmless, just like the pro-coup and secularist army in Turkey, which has tortured thousands of people. For this reason, the EU glossed over this overtly staged military coup, which turned into a massacre, only by announcing its disapproval. And it still hopes that the decision will be revised during the appeals process, as if a coup was not staged and the implementations were lawful. Does this mean that the EU would not be bothered by executions? It is a shame.

The world should not offer only single definitions for democracy and secularism. And it is high time to get rid of the maladies of realpolitik after 200 years with a more humanitarian worldview. It should be kept in mind that politics based on people and accord with the sociology of people is the cure for all forms of radicalism. If radicalism is the real matter, this prescription is the most suitable. In a world where the Aegean and Mediterranean Seas are graveyards for helpless refugees and the Syrian dictator kills 300,000 people with chemical weapons, none of us can be safe. We now have to move to a milder idea of reality and a fairer order of competition.The same is also valid for the EU and the U.S.'s relations with Turkey. They should abandon seeing a democratically elected ruling power, which is about to celebrate its 10th election victory, as an enemy. And they should also abandon assuming the discourses of legal and illegal structures that ally against this ruling power as the sole reality of Turkey. Turkey's evolvement in the Syrian or Egyptian cases will first of all constitute a great threat for Europe's future and security. Turkey is the only secular Muslim democracy that addresses both the Middle East and the West. It is required to see this as a great chance rather than a threat.
Last Update: May 22, 2015 9:18 am
RELATED TOPICS